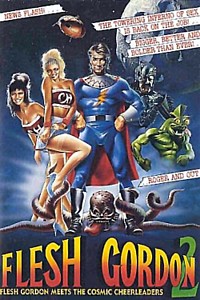 Before I start I want to defend my reasons for choosing this film – it’s hilariously bad (films like this have websites dedicated to them!), but at the same time it’s got such clever mixed media and creative nonsense I thought I’d risk my reputation to review it. (Do I have a reputation?!)

The lines are pretty klutzily delivered – there are no Meryl Streeps or Charlton Hestons here! As a matter of fact, I couldn’t tell you who anyone is! I can say however, that the stop-action “creatures” are well done and that someone knows their way around animation. I ought to know, I took a course here in Calgary and found out how mind-numbingly tough it is to make a creature walk!

Well, anyway, if you don’t mind some women’s breasts popping in for most of the film and some pretty crass humor at about the mid point I actually recommend having an afternoon roar over how bad this film is! Part of the fun is that it’s intentionally (I hope!) stupid!

Here’s a little taste of the plot:

When actor Flesh Gordon is kidnapped by the Cosmic Cheerleaders to save their people from the evil genius who invented the Impotence Radiation beam (ahem! I’m NOT making this up!), Flesh’s gorgeous girlfriend runs to her old pal, Dr. Flexy Jerkoff for his help. Dr. Jerkoff – a somewhat inept medical doctor (he blew up a woman’s breasts) – happens to have a conveniently parked flying saucer out in his backyard. When called upon, he leaps into the craft and using copulating chicken power (sheesh!) he flies to chase down Flesh and the evil doers who have tried to spirit him away to another galaxy.

Ok….ummmm blame the writers Doug Frisby and Howard Ziehm for the plot line and names, not me!!

This 1989/1990/1991 (I’ve read three years it supposedly came out!) film is bottom (oops another pun) of the barrel in acting talent. It has very capable, even talented behind the scenes people wasting their energies in a nonsense sex romp.

The sets are well done if not elaborate. The costumes are acceptable, if not downright well made. The claymation creatures are worthy of the great Ray Harryhausen, the special effects pioneer, himself! I’m pretty tough on what’s good in the animation front… I could tear apart Mortal Kombat 2, and I can tell you that this silly film does better in creature animation than MK2 did.

Anyway, the chicken scene with Flesh Gordon about three quarters through the film is just too funny. If you are willing to “go with the flow” and not moan it’s really quite cute! I’d have to say it’s one of the best scenes in the whole flick. That’s really kind of a shame.

The Hyper Chicken drive is just a silly spoof… the game of codball is a tribute to the “actors” who actually pulled off a good game of ummmm: well codball (and no we see no parts of any of the men).

As a final note, the only thing fun about the scene in the intestines (ick) is the singing group, “Smoky Pile and the Constipations,” although the G Spot Café has a passable comic telling jokes. The film makes a valiant recovery toward the end (start watching again after Flesh rescues his girlfriend), and the final battle with the evil guy puts Flesh in with a well-made and operated “black spider.” I really couldn’t tell you if she was a widow or not!

When the evil guy makes a call to his very overweight wife (the queen of the planet) he uses the local Frigid Bell service! The evil guy also has some character development – he panics when he finds out that his wife is being ummmm:well – satisfied by Flesh Gordon. Again, they show nothing. But suddenly his real affection for her comes out. This character stuff is probably an accident as no one else does any developing through this!

Sound effects are sparingly used and are well chosen. Some of them actually sell a moment.

This film will never make it to the Oscars. I don’t think the “series” will ever sell off the store shelves, but I do think the producers had a creative idea and just decided that with the low budget they had they required nudity to sell it at all. Heck, Hollywood’s been running on that theory for eons. Maybe they’re right, I dunno that’s a huge debate. I just think with better performances (such as people not raising their voices an octave above normal), and less nudity they would have had a much better shot at getting a more general audience. But then the fun of the film would be gone… and so the debate continues.