Adam, my ten-year-old son, attends Sacred Heart School in Regina, Saskatchewan. This year, through hot dog and “freezie” sales, Adam’s Grade 4/7 class raised enough funds to finance a class camping trip as part of their Environmental Studies program. Chaperones were needed and I didn’t want to turn down a great opportunity to spend some quality time with my son. Adam was thrilled when I volunteered to go.

Along with having fun, the purpose of the trip was to connect with the natural environment and learn new skills. The students planned their own menus, and prepared to do their own cooking. The equipment list grew as Adam was elected to supply the pots and pans, juice containers, and cooking implements for his group. I had to take the truck to haul it all.

The day of the trip dawned and we traveled southwest to Avonlea, Saskatchewan. The students managed to set up their own tents, organized their gear and tested their menus by cooking lunch. Charred on the outside and raw on the inside, meals that would have been rejected by the adults were wolfed down by the students who were proud of their culinary efforts. The rest of the day passed quickly as the class learned how to read a compass and practiced their new orienteering skills.

At sunset, the adults took the group to the beach to skip stones. The students competed for the best round and flat stones. Those who had more patience and found the right one were rewarded by a good skip, discovering one of the joys of childhood in the process. The impatient children contented themselves with tossing large rocks into the water, probably resulting in many fish suffering concussions.

The second day was spent at the Claybank Brick Plant, located in the “Dirt Hills” just outside of Avonlea. Now a Saskatchewan Heritage site, in its heyday, the brick plant manufactured bricks made from the rare “refractory” or heat resistant clay found in rich deposits in the area. The original homesteader hauled the clay 50 kilometers to Moose Jaw by horse and carriage for manufacture. The arrival of the railroad about 1910 made it possible to build a plant at the site of the clay deposits. Due to the low water content of the clay, the bricks could be formed by machines and fired on-site in large kilns. These “refractory” or “fire” bricks were suitable for use in furnaces and other areas where high heat needed to be sustained for long periods of time. Bricks from the Claybank plant were even used to line the rocket launch pads in Cape Canaveral, Florida. The varieties of bricks manufactured at the plant expanded to include “face” brick suitable for use in construction. One of the best examples of face brick produced by the Claybank plant can be seen in the facing of the Chateau Frontenac Hotel in Quebec City. 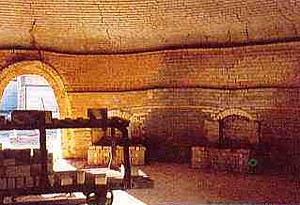 As part of the outdoor education program, the students had the opportunity to explore the Massold Clay Canyons and Clay Pits; where the clay for the plant was mined. Divided into groups, Adam and his classmates were given maps, compasses, and digital cameras. The students went into the hills to explore and learn about the unique features of the area. The boys mainly wanted to explore the many quicksand pits, but some diversionary tactics on my part steered the boys away from these traps. The boys explored caves, hunted for rocks, discovered flowering cacti and took pictures until the memory on the camera was filled (These pictures would be made into a CD for the boys to take back to school.). Two hours later, we came down from the hills; sun burnt and thirsty, and took advantage of a cool drink and a chance to relax in the air-conditioned interpretive centre.

The group toured the brick plant, where bricks were manufactured from 1914 until 1989 when modern technology rendered the machinery at the plant obsolete. A reminder of the past, the time clock still blows the plant whistle on a regular schedule. The brick-making machinery is still operational and the Interpretive staff manufactures bricks once a year during Heritage Day activities. The plant is set up as it might have been found during the early part of the century. Employee pay scales were posted by the time clock and the students were surprised by the wages earned by the workers during the early part of the century. Specially designed bricks were hand-made by skilled craftsmen. These workers had to remain on the job until each one had completed a quota 400 bricks daily. Accuracy was important as faulty bricks were rejected and would have to be redone. Paid only pennies per brick, it was hard labour for these workers.

In Adam’s opinion, the trip was a huge success. He connected with his natural environment and had a great time. As I drove my tired and sun burnt child across the spectacular beauty of the prairies towards Regina, I was grateful for the opportunity I had to reconnect with nature, if only for a short time. Adam expressed his feelings with that perception that ten-year-olds sometimes have, “You know mum, I’m not ready to be back in the city yet.” And as we sat in the five o’clock traffic jam, neither was I.

The Claybank Brick Plant is located about 10 kilometers west of Avonlea, Saskatchewan, on Highway #339. Information on the plant and the programs it provides can be found at http://www3.sk.sympatico.ca/cbphm