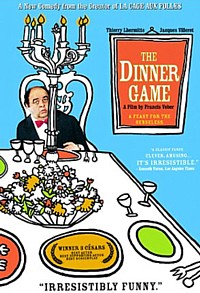 I’m a bit embarrassed not to have heard of this film masterpiece from France. I admit it. But I’m awfully glad I caught up! Written and Directed by Francis Veber, The Dinner Game, is a hilarious comedy of errors. It popped on Bravo TV’s screen recently and I found myself immediately disgusted seeing English subtitles. “Oh no! Not another film with subtitles:they’ll kill me if I do a review,” I whined. I figured I better change the channel. But try as I might I couldn’t get away from this fun production. Sorry. We’ll all just have to read quickly or bone up on our French. On the bright side I realized I know more of the language (not Quebec version) than I ever thought I did!

There are several positive points to this film. For me the best was that the film just keeps escalating in hilarity.

This film obviously had a budget behind it. Though I don’t recognize the famous stars from France I recognize quality film production when I see it. The camera is steady, yet a bit pragmatic. The sets are well furnished. The actors aren’t muttering or overdoing their lines. The script is continuously moving into new avenues.

The story begins when a group of yuppies get together in school and put on a dinner. As obnoxious schoolboys they decide to have a contest to see who can find the biggest “idiot” to bring along. They decide amongst themselves who wins and then start again for next week’s dinner. The problem is these boys grew older and got good jobs, but they never grew up. They are still having these dinners. One of them brags, “no idiot has ever found out!” Ahhhh, but as you can guess that’s all about to change.

A boomerang enthusiast is on the list of idiots and everyone sits around “politely” listening to him talk about the subject in the living room before dinner. The publisher, Pierre Brochant, perfectly played by Thierry Lhermitte decides he’s found the prize-winning idiot in Francois Pignon, a low-level accountant at the Financial Ministry whose obsession is building models of famous architectural or engineering feats (the Eiffel Tower, for example) using only matchsticks. He happily tells strangers on the commuter train about his hobby, showing photographs and blabbing in great detail about how many matchsticks he used as well as how many tubes of glue etc. Pignon, hysterically yet sensitively portrayed by Jacques Villeret, is invited to dinner by Brochant, who says he’s interested in doing a book on Pignon’s models. Yet when Pignon shows up at Brochant’s door ready to go to the dinner, Brochant has bunged up his back and cancels.

Through a serious comedy of errors Brochant’s wife phones and leaves a message that she is leaving him. She cannot deal with his mean dinner game and decides it’s too much. Our model maker had his wife leave him and for two years he told himself the same things Brochant did, “she’ll come back.” This of course makes Pignon want to stay to comfort Brochant. Brochant is obnoxious and tries to throw out Pignon. It takes a mountain of insults before Pignon gets the message:but before he gets away he proves to useful to let go of! Brochant’s wife does return, but since Pignon is the only one who can answer the door and Brochant’s mistress is expected, he mistakenly greets the wife as the mistress and the wife gets an unexpected ear full. Crushed, she leaves. Eventually the mistake is identified and Pignon is blamed.

Unfortunately, through a pile of mistakes the publisher finds out that his wife is not over at her ex’s house, where he expects she’s run to. Her ex says she has a date with a local Casanova at his secret love nest. Eventually, after Pignon’s boss gets involved they get the address for the love nest. They decide to phone as the safest measure to ensure she is over there. No one can call in the room since the Casanova knows each man’s voice — except Pignon. Since Pignon has repeatedly bunged up phone call after phone call in front of Brochant they decide to coach him on exactly what to say. Eventually the call is made and over the loudspeaker they find out Brochant’s wife canceled at the last moment. Instead the Casanova’s “getting even” with the man who’s auditing him, Pidnon’s boss, by sleeping with HIS wife. The boss, as it happeans, is sitting in the room aghast — listening to every word!!

Twists and turns abound, and the film is expertly made a thrill to watch by the fantastically enthusiastic performance of Jacques Villeret (Pignon). My husband and I found we were falling over our knees at Pignon’s lack of tact, and his ability to get lost in a moment and forget the main point of a phone call. And yet when Brochant’s mistress is suicidal he is there for her, tender, supportive, listening. He also winds up the film with a magnificent rescue of Brochant’s marriage:.uhhhh:we think he does. You’ll have to see the film and see if you think he did or didn’t.

The Dinner Game is subtitled I do admit. And I do hate to do this on my already crammed shelf, but I’m looking for a good subtitled DVD of this ASAP. It’s too funny to pass up! Get a good box of popcorn and park yourself for about an hour and a half of severe fun!!