The following is an overview of the contents of Athabasca University’s National Aboriginal Day special edition of The Insider, as well as a portion of a press release from The University of the Arctic, of which AU is a member.

See: http://www.athabascau.ca/insider/2003/June20-03.htm to read the entire issue of the special edition insider. 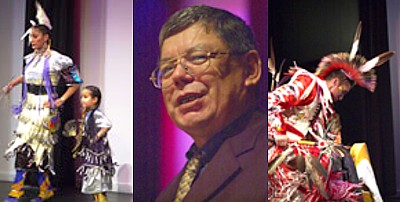 “This edition of the Insider is dedicated to our friend and colleague, Lori Oddson. We think of Lori as the epitome of professionalism, and as a quiet and dedicated Aboriginal Rights advocate. She practiced what she knew, and lived what she believed. She supported us as an advisory committee member, human rights advocate and friend. Most of all, Lori taught us how to integrate our political beliefs into our practical lives and served as an example of the effectiveness and efficiency of anti-racist thinkers who constantly search for ways to live together in peace.”

– The Centre for World Indigenous Knowledge and Research at AU

In the special edition – these stories and more:

And Justice For All? : Aboriginal Peoples in the Canadian justice system – By Priscilla Campeau

“Two police officers who abandoned an Aboriginal man on the outskirts of Saskatoon on a freezing cold night have been sentenced to eight months in jail. Ken Munson and Dan Hatchen were convicted of unlawful confinement earlier this year. The Crown had asked for a minimum one-year sentence. The maximum penalty is 10 years. Judge Eugene Scheibel cited the fact that both men were facing financial ruin as reasons for the lighter sentence. Both men lost their jobs and their pensions after the incident…”

The first graduating class of the new Aboriginal Police Studies certificate program at Grant MacEwan College “?hit the streets’ May 2003. Developed one year ago in response to various stakeholder groups and a growing demand for Aboriginal police members everywhere, the program seeks to address the needs and trends experienced by Canadian police services:

This has been a hard year. Leaving my job and attending school for a year was supposed to be an educational experience, and it has been. However, most of the lessons I have learned have been hard ones and few have been in the classroom. For the most part, I have been learning to look beyond the individual to the collective (in terms of racism, understanding, and responsibility).

We know from experience that when individuals harbour racially biased and stereotypical beliefs and act on them, individuals are acting in a racist manner. We also know that education is a key weapon in the war against racism. Take, for example, the racially charged situation I found myself in recently. This month I had the misfortune to be seated by a group of teenagers who, in a ten-minute word strip, pulled out every racialized notion of Aboriginal people and splattered the walls with them.

You know the stereotypes. I will not dignify them by repeating them.

I will however, repeat my response, because this is the silenced voice which I do not always possess and many do not hear enough:

Blue Quills First Nations College 2nd Annual Cultural Camp was held June 2-6. Through activities, workshops, inspiring speeches and traditional Cree ceremony and celebration, people of all ages and generations came together to provide a shared experience in a natural traditional setting; to provide knowledge and understanding of the historical colonization process and its impact on Aboriginal Peoples; to provide emotional and spiritual healing opportunities that would empower community members and encourage them along their healing journey; and to reconnect with traditional values and teachings in a cultural yet educational context. Janice Makokis had the opportunity to attend the Cultural Camp June 3 and 4, and here reflects on the experience:

The Voice extends belated Aboriginal Day best wishes to AU’s many aboriginal students, and members of our affiliated northern schools.

(Akureyri, Iceland) April 9, 2003 – Almost exactly four years since the second meeting of the then Interim Council of the University of the Arctic, the membership of this unique network of northern institutions and educational organizations came together again in Akureyri, Iceland. With the eight new members added in this meeting, UArctic’s membership has grown from twenty to nearly sixty in that time. Murmansk Humanities Institute (Russia), the University of Oulu (Finland), St Mary’s University (Canada), the Canadian Polar Commission (Canada), Pomor State University (Russia), Iceland University of Education (Iceland), Technical Institute of Yakutsk State University (Russia), and University of Regina (Canada) bring the strength and resources of their institutions into the UArctic network.

At the meeting in here in 1999, a small group of academics sat around a coffee table and discussed the plans for a new kind of academic program in the North: the Bachelor of Circumpolar Studies (BCS). Earlier this week, the successors of that first group met to assess the online pilot of the second BCS course to be delivered, Contemporary Issues of the Circumpolar World, due to be completed by the end of April. Twenty-five students at eight sites around the circumpolar North are now enrolled in the online version of the course. Additionally, a second group of fifteen students are taking the course in a traditional classroom setting at the University of Northern British Columbia, in Prince George, Canada. Plans for the final stage of the BCS, the advanced emphasis, are now being developed by partnerships of UArctic members:

Athabasca University is a member of the UArctic Coalition. To read the rest of this release, see:
http://www.uarctic.org/documents/GENPRL13.pdf