Columns
The Voice
Flicks & Folios – Which Lie Did I Tell 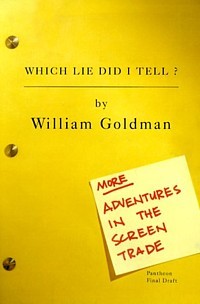 This William Goldman book starts with a bang and doesn’t let up. The two-time Oscar winning screenwriter has scripted such memorable films as: The Princess Bride, Marathon Man Magic, The Great Waldo Pepper, The Stepford Wives, All the President’s Men, and A Bridge Too Far.

William Goldman is incredibly candid about, well, everything. He is honest enough to mention his tears as a child and adult, at movies and plays, his embarrassment and his joy of red wine. He owns up to the performance arts insecurity of being discovered as “a fake” (I wish I could fake my way to two Oscars!) as well as revealing some interesting insights into Hollywood actors and producers.

For instance, when it comes to William’s time on a film set he can’t get out of the way. Not the way you’d think. As the writer of Princess Bride he tells the hilarious story of being on set during the shooting of a scene when the star’s dress is supposed to catch on fire as she’s going through a scene. He tells about being astonished at the process and getting caught up in the dress being on fire. He blurts this out while the cameras are running and of course the scene is shot! He also has a habit of being right where he shouldn’t for a camera shot! This revelation leads to hilarious stories about another Princess Bride star, André the Giant. André was a French born wrestler with a medical condition that made him grow to a gigantic size. He had a gigantic heart as well and a gentle disposition. William relays a story he was told by Arnold Schwarzenegger. It seems Arnold had enjoyed several meals with André and André always picked up the cheque. One day at lunch Arnold decided to pay so he quietly snuck into the kitchen to give the waiter his credit card. Except, before he could get away with the sneaky idea André marched up behind him. He picked Arnold up, turned him around, held Arnold nose to nose and said in his deep voice, “I pay.” He not only had Arnold in a compromising position, but he held him that way until he took him to the table and stuck him in the chair! I roared with laughter as William said, “If Arnold told me it happened, I’m inclined to believe it!”

No way is this a Hollywood tell all book, however. Dirt is just not the main focus and frankly it’s hard to find. William’s book (his second”?see his first Adventures in Screenwriting) is more concerned with giving you insight and serious tips about being in the Hollywood writing game. It is William’s forte even though he says he’s a novelist who happens to write screenplays. So why is he convinced he “knows nothing” about this stuff? A book full of this much engrossing nothing I’ll read any day!

William does give lovely touches of information about the work he’s done with certain writers, producers and actors. A few of them he’s not wild about but most of the time he is phenomenally respectful of their work.

He can’t say enough about, oh, say for instance, Michael Douglas. Apparently Michael is THERE for his team. He is always aware of the work that is involved. Michael is one of the few people in Hollywood who you can tell their idea isn’t going to work – so long as you can explain it and support your reason. So many people can’t take that! Funny, I heard the same about Michael from a major “rewriting” man in Hollywood who wanted me to be in his life years ago. He had worked with Michael on a major film and told me the same story. The similarity made me give credence to William’s writing and his honesty.

William’s writing capability shows as the book unfolds. The writing makes you fall over, cry, or get so angry you could spit blood! But it’s all the man behind it”?William Goldman. His talent is amazing. His films are amazing. His book is amazing. The discount price to purchase this book from Chapters is amazing.

I recommend this insightful book to anyone interested in the screenwriting or novel world. Or maybe just to anyone who wants to really enjoy a good book.