By Stephen Thomson, The Peak

VANCOUVER — There was celebration in the streets after the International Olympic Committee announced the site of the 2010 Olympic and Paralympic Winter Games. After two rounds of voting last Wednesday, Vancouver narrowly edged out Pyeongchang, South Korea 56 to 53.

As soon as IOC president Jacques Rogge revealed the result, the crowd gathered at General Motors Place burst into a frenzy of cheering and towel waving. Pyrotechnics were lit off and confetti filled the air all the way up to the Olympic banners hanging from the rafters. The Vancouver bid backers had been anxiously waiting in the stadium since 6:30 a.m. for members of the IOC to finish voting in Prague, in the Czech Republic. There were many Canadian Olympic champions in the crowd, including Daniel Igali, Ross Rebagliati, and Silken Laumann. Simon Fraser University student and national swim team member Ryan Laurin was also on hand to show his support. 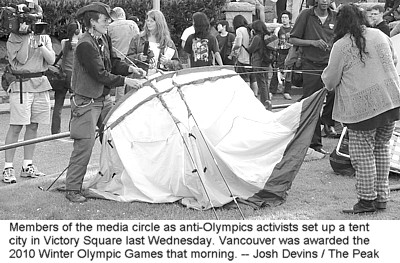 Although many people were confident Vancouver had the 2010 Games in the bag, Laurin remained skeptical until the end. “The bidding process is kind of like a box of chocolates “? you never know what you’re going to get,” Laurin said. “Everyone thought Austria and Vancouver were the two to go for and Austria was gone after the first round.”

The crowd was flooded with many feelings when the announcement was broadcast on the stadium’s big screens.
“I was excited, relieved, happy “? a thousand different emotions, I guess,” said Laurin. He hopes the 2010 Games will increase funding for a variety of sports. $68.2 million will go to Simon Fraser University to build a speed skating oval on the Burnaby Mountain campus.

The Olympics will bring in a lot of money according to Desirie Fraser-Laslow. As the store manager of Roots on Robson Street, she knows how the Games can benefit business. “We already are so well known,” Fraser-Laslow said. “Being in Salt Lake and doing the Olympic outfits for the British team and U.S. team and the Canadian team last year certainly broadened our horizons.” The Robson Street store was full of people after the early morning announcement, many buying shirts that read “2010 Vancouver.” “We’ve been selling the t-shirts for a couple of months now and every shipment that we’ve got we’ve sold out,” Fraser-Laslow said. Outside the store, people were loudly celebrating the result of the vote. Horns were blaring, people were shouting and Canadian and Olympic symbols could be seen everywhere.

Support for the 2010 Games was not unanimous, however. Angered by a lack of social housing and cutbacks to welfare, protesters congregated in Victory Square later Wednesday evening. After several people addressed the crowd of about 100 with a megaphone, the group set up a tent city on the grass. The Anti-Poverty Committee and the Housing Action Committee organized the event and supplied tents.

“We’re protesting the Olympic bid process and the effect it’s going to have on the community,” said Ingrid van der Kloet, a member of the APC and an SFU women’s studies graduate student. “Also, we see the Olympics as tied into a broader strategy of the B.C. Liberals to basically attack poor, innocent people.”