Articles
The Voice
White-Collar Crime, From Enron to Martha 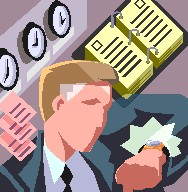 “The ceo’s of Enron and Worldcom are Al Capones, while Martha is Oliver Twist,” according to Cynthia Tucker, editorial page editor of The Atlanta journal-Constitution (Thottam, 2003). These words are little comfort to already battered and betrayed share holders of big names like Enron, Worldcom and now Imclone.

White collar crime (http://www.law.cornell.edu/topics/white_collar.html) is a crime committed by a person of great respect or high status in his or her field. This term was first used by Edwin Sutherland in 1939 during his address to American Sociological Society. In general, it accommodates a variety of nonviolent crimes committed in commercial settings for financial gain. What makes white-collar crime so difficult to bring to justice is the sophistication criminals use to hide their crimes. Keep in mind, these perpetrators are not every day street thugs who try to seize the opportunity. In contrast, their actions are carefully mastered webs which are usually based upon mutual benefits and golden handshakes.

White collar crime charges, like those for other crimes, can be filed against a single person or against a whole corporation. If found guilty, these offenders can be fined and imprisoned, and they may be responsible for the costs of prosecution, or other restitution may apply. The most common white-collar crimes these days range from simple mail fraud to sophisticated financial frauds, insurance fraud, government fraud, tax evasion, securities fraud, insider trading and money laundering (Legal Information Institute (http://www.law.cornell.edu/topics/white_collar.html ).

Another common form of white collar crime involves computer or internet fraud. In this case hackers simply entered into our computer systems and use private information like our social insurance number, credit card information, and date of birth as their own to apply for credit or make future purchases. To avoid this, make sure you do business with credible merchants only. Ask merchants about their online or privacy policies regarding giving your information to others. Choose PIN numbers and passwords carefully and do not give them out to other people. After accessing your financial institution’s website or other important websites don’t forget to log out. We are living in they cyber age and it’s making us more vulnerable to thefts. According to the FBI, white collar crime is costing the U.S.A more than $300 billion annually (RCMP Computer Crime Prevention http://www.rcmp-grc.gc.ca/scams/ccprev_e.htm).

Following is an overview of some of the biggest white collar crimes and scandals of our times:

Enron started out as an interstate pipeline owner, and branched out into sales of natural-gas commodities and electricity. In fifteen years it shot up to No.7 on the fortune 500 list of companies with $US 100 billion of business in 2000. It was a greatly admired company and considered one of the best places to work. Recently, however, it went bankrupt and became the biggest corporate bankruptcy in American history. What went wrong with this company whose shares were valued at $US 60 billion?

Stockholders and lenders lost billions of dollars – among them over 20,000 employees who lost their jobs. But there were also people like Ken Lay who had $US 205 million in their pockets. How he and others like him were able to secure a future for themselves when others were left at the mercy of bankruptcy court is unknown. It was later found out, however, that Enron had hidden massive debts under a matrix of partnerships, mostly offshore, so in case of crisis the blame would shift to those who were virtually non-existent except on paper. In the meantime, they gave a face lift to company’s balance sheet with false claims of prosperity to lure stockholders and lenders to keep pumping money into company.

Insider Trading is said to take place when those who have privileged information about special events use that information to take advantage of surges in stock prices or to avoid losses on the stock market, while common stock holders are left in dark at the mercy of stock market’s fluctuation. This is what happened in the now famous case of domestic diva Martha Stewart. She was charged with insider trading when she sold stocks in a pharmaceutical company called ImClone the day before ImClone was denied a patent for its cancer drug, Erbitux. In this case the link was Sam Waksal, CEO of ImClone, as his family sold ImClone shares same day through the same broker as Martha Stewart. Sam Waksal has been found guilty and sent to prison for seven years on insider trading. Martha Stewart has so far denied all allegations. Everyone now has to wait and see where the case will go from here (http://www.srimedia.com/artman/publish/article_245.shtml).

The picture is not so rosy for us Canadians either. Let us see what kind of white collar crime is hip in today’s Canada:

Money Laundering is a process through which illegal income is concealed or made to appear as though it has legal origins. This allows criminals to spend dirty money without getting caught and without paying any tax.

In the summer of 2000, KPMG (http://www.kpmg.ca/english/services/fas/publications/moneylaundering.html), a network of Canadian professional services firms, did a survey of financial institutions and other industries at risk. Most reported that the risk to their industry is perceived to be medium, while they rated the risk to their own company as low. Chartered banks reported the highest level of risk while insurance companies are at the lowest level of risk.

Corporate crime: Corporations that commit crimes are finding ways to make their crimes pay. Recently “a chemical corporation [was] fined $100,000 for dumping toxic effluent into a lake, a brokerage firm [was] fined $500,000 for insider trading, and a manufacturer [was] fined $75,000 for exposing employees to unsafe working conditions.” But, each of them has found a way to write off all of their fines and penalties as tax-deductible business expenses by using a loop-hole in Canadian tax law. The law is the result of a supreme court decision that fines and penalties quality as a ‘cost of doing business’ and are therefore legitimate expenses. Law professor David Duff of the University of Toronto describes the court’s decision as a “radical” rewriting of Canadian tax law.

This loophole is continuously costing Canadians hundreds of millions of dollars in lost tax revenues every year. Unfortunately , there is no evidence that the Federal government have plans to address this issue in the near future. In the United States, income tax laws forbid the deduction of any fines arising from violations. (http://www.workopolis.com/servlet/Content/fasttrack/20030328/CODEDUCT?section=Legal)

We have established a law and order system to make sure those who commit crimes are made responsible for their actions, but how we are going to treat these white-collar criminals who steal our trust and money as well. Should these people be barred from future transactions? Or are fines, penalties and imprisonment enough. How can we know if other fortune 500 companies are not doing the same thing as Enron did? What will be the future measures taken by the common person before investing retirement money in publicly admired companies? These are the questions which need to be answered soon.

In Conversation With . . . Paul Leighton, Part I

From My Perspective – Martha Stewart