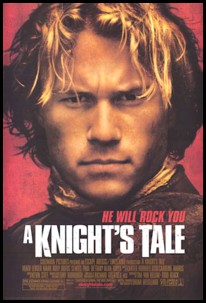 There have been some odd concepts for movies in the past but I am truly shocked at this one. Even more shocking – the unique concept worked for the most part.

I haven’t been a huge Heath Ledger fan but I am a fan of Mark Addy (The Full Monty) who plays Roland. Heath (as William) is really one of three servants to a knight. Slumped under a tree, the errant knight poses a problem for the three lads.

He is to fight in the local jousting games and he likely won’t do very well – since he’s dead!

Because the lads are starving they decide that there is only one thing to do:Heath’s character William Thatcher steps up to put on the costume and fight in the knight’s place. So how is this an odd concept? Well, the jousting match and the entire film is accompanied by modern rock music. For instance the first song at a match is Queen’s We Will Rock You.

Ummm, I don’t think I remember that song in the Middle Ages – but I could be wrong. As a matter of fact I was delighted when a proper dance of the time was being done, but then it bled into a David Bowie hit – Golden Years. The dance style changed as the music did. For some reason it worked.

A couple of touching scenes from Thatcher’s childhood don’t quite work on screen, however. I found I was a bit lost in the time shifts and wondered who the little kid was and why they were in a boat.

As the boys approach more competition they find they require faked paperwork. That is how they meet a nude Geoffrey Chaucer played by Paul Bettany.

Chaucer lost his clothes for being unable to pay his debts in a card game! Unfortunately, Chaucer is portrayed as a gambling addict and wrestling-style announcer at the jousting matches as he introduces his fictitious knight. Chaucer creates useable papers for the boys, saying William is Sir Ulrich von Liechtenstein of Gelderland.

Shannyn Sossamon (Jocelyn) is Sir Ulrich’s ladylove. He is smitten with her but going nowhere fast! She is a lady of the church and will not, at first, accept the interests of the knight. Of course she will accept the advances of one of our bad guys, which is how we hear Sir Ulrich slandered and build up our bad guy’s reputation.

Sir Ulrich, of course, has to prove his love for Jocelyn, and to do this she tells him to lose a match. At first he says he can’t do that, but as the match begins he throws the event. Soon she signals that he is to recover and win:(women! We do change our minds!).

Sir Ulrich is virtually unbeatable. He has a good chance to win the world matches. Eventually Sir Ulrich’s luck runs out and he winds up in a stockade while his helpers wonder if the locals are going to pelt them with tomatoes for hours on end.

It is at that point that we find one of the bad guys (The Black Prince of Wales) finally willing to come forward and admit his being heir to the throne.

The future king is good enough to admit that he and Sir Ulrich are both impostors for their love of the sport. He decrees Sir Ulrich is free and then everyone is happy as he knights him for real.

Anyway, there is brief nudity and a sexual conversation but I wouldn’t exactly call this a “spicy” film. It is a good bit of film. I just wouldn’t recommend using this film as a reference for any Middle Ages history classes as there are too many liberties taken with the presentation of the time period.