Mystery Of The Rock Revealed

Science Outreach – Athabasca has shed some light on the origins of a rock mounted on a concrete pedestal just east of Athabasca University’s headquarters. The large spherical rock has remained a sheltered and mysterious occupant on University grounds – until now.

Recently, Science Outreach – Athabasca created and erected a plaque that celebrates and explains the origins of the curious formation. Nearly 1.5 m in diameter, the rock is embedded with many clam and snail fossils from critters that lived 100-166 million years ago – when Alberta was covered by an ocean.

The plaque explains that Bertram and Blanche Watson discovered the rock on their farm several years ago, and donated it to Athabasca University for the public to enjoy. Bruno Wiskel delivered it.

Members of Science Outreach – Athabasca also thank Don Kvill who helped with the written description, and Athabasca University Facilities staff who built the shed and mounted the plaque. 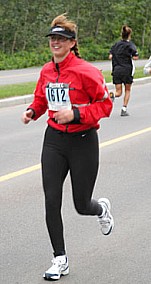 Some might call her crazy, but you have to admire her fortitude.

“There’s just something about being out there, going through the range of thoughts and emotions,” Belland said, admitting that there were tough moments along the route.

“But never once did I think I couldn’t do it,” she said. “That leaves too much of a window for negativity. You just keep running.”

She feels strongly that people need to conquer the inner voices that prevent them following their hearts and dreams.

“You can truly do anything you set your mind to,” she said. “Just do it.”

AU Copyright Issues Parallel Those Of Other Institutions

That’s all changed, thanks in part to AU Copyright Officer Lori-Ann Claerhout. Claerhout was one of three key planners of a western Canadian copyright conference held recently at The Banff Centre. The informal event brought together copyright officers from post-secondary institutions, libraries, and bookstores all over the region to discuss copyright laws and realities in Canada.

Claerhout says she came away from the discussion sessions feeling encouraged. “I found that the things we’re struggling with, the rest of Western Canada is struggling with,” she noted, pointing out examples of issues such as the need to expedite permission to put material online.

“We’re all in the same boat,” she said. “It’s not unique. The rules that course coordinators have to follow aren’t specific to Athabasca University. (Copyright) is not a simple procedure anywhere because we’re all dealing with issues.”

In fact, Claerhout said, Athabasca University has an advantage over many institutions that have only recently opened copyright offices.

“I found (at AU) we have a lot of background, 30 years of files to draw from. Basically, at AU and Open Learning Agency, our offices had been in situations that others had been asking about.”

Besides an annual conference devoted to copyright issues, Claerhout also came away from the experience with more resources to apply to her work at Athabasca University. She has set up an online discussion board, and conference participants regularly contact each other with questions.

“I think I have a great pool of people to get information from, or bounce ideas off of,” Claerhout said.

And it’s so easy to find. http://www.athabascau.ca/research 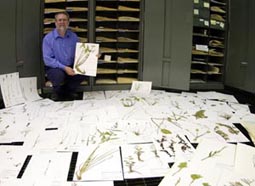 State of the Plants