Columns
The Voice
Flicks & Folios – Beauty: A Retelling of the Story of Beauty and the Beast 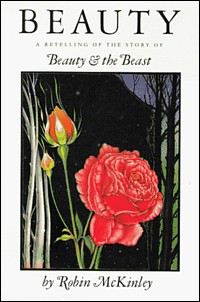 Well, I have to admit I’ve been taken off guard. I didn’t expect to read a book from the “juvenile” section of the Calgary Public Library and enjoy it so much. Before you decide to disappear due to the age bracket let me tell you that this is a very sophisticated story in comparison to the original. I was told about this book a few years ago in college. I decided as a lazy summer reading project I would trust the woman who recommended it so highly and track it down.

The story begins with children born with names of personal qualities: Grace, Hope and Honour. Except Honour doesn’t like her name. As a tiny child she tries to find out what the names in her family mean. Although her father manages to explain Hope and Grace somewhat she finds she still doesn’t grasp her own name’s meaning and stubbornly announces she’d much rather be called “Beauty.” Since she sees herself as the least attractive child in the family she has trouble with the name but just as much with her given. After a while she just isn’t willing to let go of the nickname.

After the family fortune is lost, they must sell almost every worldly possession and go somewhere they can make a reasonable living. They move to an area near a forest. Gossipmongers in the area say the woods are enchanted and the family is told never to go near the area, nor even to its edge.

One day the father goes out and gets lost along the path as he is coming back from his trip. He goes into the castle and is fed and rests. As he leaves he remembers how his children have asked for nothing, except Beauty who wanted rose seeds if they aren’t too expensive. Seeing a fantastic rose bush at the castle he decides clipping one for his daughter would be all right, except this action enrages the Beast who presents himself and tells the father that he must now come home within a month or send one of his daughters to stay. The Beast promises never to harm the child and that she will live well. Heavy with guilt the father returns home – with a rose made of gold. This sets up our tale and, of course, Beauty insists on being the daughter to go. The father and family are heavy with grief but realize the Beast must be dealt with.

Author Robin McKinley does a magnificent job of taking the original tiny child’s story and turning it into a magical fable that even adults can enjoy. As soon as I reached a specific point in the book I found myself unable to read fast enough to get to the lovely end. There is no violence or gore in the story, only wonderful writing and wonder. And yes, if you have kids you can get it for them.

Peter S. Beagle, author of The Last Unicorn and A Fine And Private Place has a review on the back cover: “BEAUTY is the most delightful first novel I’ve read in years, and astonishingly skillful. Robin McKinley never slips up once. The writing is absolutely sure-handed, and the characterization never falters for a moment. I was moved and enchanted by the book. I didn’t want it to end. Both as writer and reader, I can’t wait to see what Robin McKinley does next. This first one is a marvel.”

For those of you wanting a lovely read, without having to strain to follow a plot, I have to recommend Beauty to you. I hope you enjoy it.