Can you remember your first car?

Mine was a 1968 Pontiac Grand Parisian. I was the proudest sixteen year old in Vancouver when my father bought it for me. I tried to spiffy it up however I could on a shoe-string budget and it was great until I totaled it in an unfortunate accident (see the Voice Vol. 9, Issue 35).

My next rides were of similar vintage: a 1968 Cutlass Supreme; a 1970 Buick Wildcat; a 1970 Pontiac Lemans; etc. For all of them I did my best to keep them visually appealing and reliable, if not economical.

Of course I wasn’t alone in my endeavors, as my teenaged friends were also trying to become and remain drivers on very limited budgets. Jason Campbell (http://www.jgrooves.com), a very good friend of mine, bought his first vehicle in September 1982″?a broken-down old truck. He tried to keep it from falling apart beneath him by spraying it with several colors of paint. In hindsight it was a pile of junk; but to him, it was “his truck.” 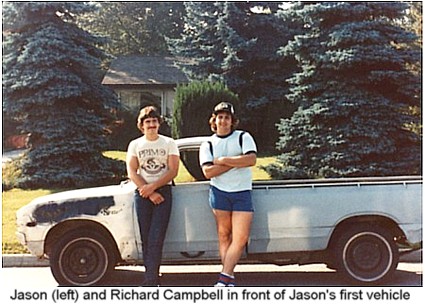 I found myself reflecting on those times today as I lay on my side in the dirt brush-painting my “new” 1987 Volkswagen Golf in the driveway of my home. I was literally laughing out loud as I watched the rust-paint run down the side of it. I felt like a 38 year old teenager, painting my beater so that it will last a few more months (in this case, a few more years). It actually looks pretty good if you don’t approach closer than twenty yards or so; any closer and you begin to make out the brush-strokes dried into the finish.

For the past several years I’ve contemplated taking my university studies to a fulltime level and recently my wife and I have decided that I should take the plunge. As part of our preparations for life after fulltime work, I sold my 3/4 ton Ford pick-up with a 7.3l diesel engine and bought a Golf 1.6l diesel car. I’m hoping that it will last me through my impending years of study (fingers crossed). If going back to school doesn’t make me feel young again, keeping my new old car road-worthy certainly will. I’m contemplating cutting a hole in the floor-boards under the driver seat so that I can give the engine a helping-hand going up hills”?Fred Flintstone-style. Well, I’d better be off now. I have to get to the auto wrecker’s before it closes. I need cheap parts and more cheap parts: Better pick up some more rust paint while I’m out too: 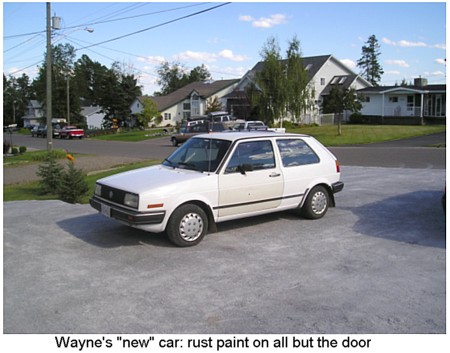