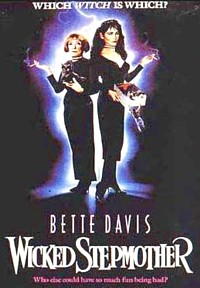 “That was a very odd film.”

I’d like to say Wicked Stepmother is bad but it’s not. I’d like to say that I loved it but I didn’t. It has a peculiar set of characteristics that make this film worth taking a look at.

First, it has screen legend Bette Davis, post-stroke and I believe post-mastectomy, playing the new step mom. She is beyond thin and makes Ally McBeal’s Calista Flockhart look chubby. Despite these physical side effects she is an incredible trouper. I’m not sure I would have the personal confidence to be seen on camera with half only my face working well and an obvious limp.

Starring alongside Davis is Richard Moll of Night Court TV fame, who provides the only true comic performance in the show. He plays a buffoon private detective who goes so far as to have a statue of the Maltese Falcon on his desk. His work as a detective hits a pinnacle when the wicked witch’s “daughter” comes out to get him all rattled. He chops the house’s hedge to pieces in echo of her crazed seduction as she moves toward him. Barbara Carrera and Richard must have had some serious fun with that scene!

Happy Days TV show star Tom Bosley does a straight-faced comedy routine as a local cop, while former Hart to Hart houseman Lionel Stander comes in as the new family’s father. Then there is stunning James Bond beauty Barbara Carrera doing an odd “daughter of” role. But the catch is she’s not really the daughter. Do I have you confused yet?

The film begins as Tom is called out to a complaint. He finds several people shrunken down and “trapped” inside a shoebox. These people are alive and well but speaking in pixie voices. Nowadays we see films with shrunken people with more realistic, smaller caliber voices, but back then if you shrank your voice turned silly.

Anyway, these people file a complaint and explain that this old woman shrunk them by magic. They describe her in detail and the search is on. But the old lady / witch has disappeared. As the hilarious “old lady line-up” draws to a close in an attempt to ID the wicked old witch, Tom tries to put the shrunken people back into their protective shoebox, but he is perplexed as to how to do it, while pixie voices complain, “don’t squish us!!” So, in frustration, Tom tips the chair they’re on and holds the shoebox below it!! His delivery is excellent.

Many comic sight gags are in the film. I wish I could show you some of them and how well they work. In one, a reference is made over how the witch looks familiar. “But where I have I seen her?” mom wonders to herself. Just at that moment, in the background on a Los Angeles mural are screen legends – including, of course, our star Bette Davis. These sight gags sometimes take a bit of knowledge of Hollywood history, as in the crack about the new family’s dead mother. They then cut to a picture of Bette Davis’ Hollywood film rival Joan Crawford on the table as the dead mother!

The biggest laugh goes to the mom and Barbara Carrera, when Bette calls in the Bond beauty and throws a bucket of cold water on her. As she does this, Barbara immediately goes into a classic Wizard of Oz “I’m melting – I’m melting!,” performance. She sobers instantly and snaps, “This is reality, not MGM!” Of course the big laugh is, it IS an MGM film.

Back to the plot, we find the new wicked stepmother is cooking meat by the ton for her husband and new family who happen to be hard-core vegetarians.

Some of the film is utterly overdone. The mom has a cat allergy and the witch, of course, has a “familiar” as all witches do. A cat. The cat however is too heavily used as a plot point and the mom’s performance is too tight and phony.

Our big favorite in the film is the decision for the mom to learn witchcraft to outsmart the witch and she conjures up the spell by saying a dramatic, “Spell of spells do your stuff!” ACK! Great delivery when you watch it.

The number one thing I hate is the dreadful 1980s computer graphics — really awful quality.

This is a 92-minute film and worth seeing for some Hollywood trivia, good in jokes and seeing some nonsense – so long as you aren’t looking for genius, you’re fine.

Dear Barb – Out of Step