According to Alan Davis, he knew two things for certain that bitterly cold day about eight years ago when he interviewed for the position of Vice-President, Academic at Athabasca University. At the time, he was working as the Director of University Programs at Open Learning Agency in Vancouver, and had, more or less, applied for the job on a lark.

“I think all the signs were that, one, AU wouldn’t offer me the job, and two, if they did, I wouldn’t take it,” he said.

Obviously, he was wrong on both counts. For his own part, it didn’t take Davis long to realize Athabasca was where he needed to be.

“By the time I got back and thought about it a little bit,” he noted, “I realized what the opportunity was. There was no question, in my experiences in distance ed., that AU has always been the top of the pile. It’s a class act. If you’re going to work in distance ed. in Canada, AU is the place to be. I knew there was a good opportunity for me in terms of career and growth, and I haven’t been wrong. It’s been good.”

Davis and Athabasca University bid each other a fond farewell, officially, on July 25. As he departs to take up the Vice-President, Academic position at Niagara College in St. Catharine’s, Ontario, Davis and AU both look back on a period of his career that can only be called exceptional. According to AU president Dominique Abrioux, Athabasca University already misses Davis’ energy, and commitment to innovation and to the University’s mandate.

“Athabasca epitomizes everything the system should be trying to do to help people, no matter where they live, what their background is, no matter what their other commitment [sic] are. I think fundamentally, bottom line is we live up to our mission,” he said.

“I very much believe in the open concept, the focus on serving students,” he continued. “It’s a very clear focus. It’s about the students. Everybody’s committed toward the goals of serving students and removing barriers. There’s a lot of freedom here to find innovative ways to achieve that goal.

“It’s not only a place that’s open for students,” he continued, “it’s also open for staff to do all kinds of interesting things and innovate, try things out, but generally toward the same goal of trying to improve what we do for students.”

During his term at AU, Davis says he’s enjoyed his interaction with faculty, and the opportunity to support their research, their creativity, and to link that to the teaching. He is proud of the part he was able to play in the implementation of Prior Learning Assessment, articulation, and the launching of collaborations between Athabasca University and universities and colleges all over the country. He’s also proud of the courses and programs that have been developed during his tenure, such as the one-of-a-kind Master of Counselling program, and the highly unique Master of Arts-Integrated Studies program.

“The first two years were just a buzz,” he added. “There was loads to do and everything sort of worked out. The place started growing very fast. That’s when we developed the whole Canada’s Open University agenda and decided to seriously go national. We developed the linkage with Télé-Université, so we were a bilingual system, and that whole image emerged as AU as a national provider, in that first two years.”

While Davis notes he’ll miss the AU brand of “freedom to innovate,” he also says he looks forward to facing the types of constraints and challenges that come with a “brick and mortar” institution.

“With all the freedom to innovate, it is kind of crazy here,” he noted, chuckling. “It can be exhilarating, but it’s also tiring. I think in Ontario there’s going to be a different balance of that. The constraints help you not to get too far out on the limb. There’s always a balance, it’s just a balance that the balance is going to be slightly different there between what I can do and what I want to do, and what the guidelines are.”

On the less serious side : 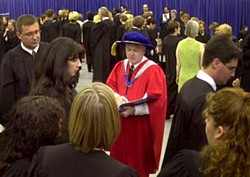 Davis, a former chemistry professor, will also miss the social opportunities afforded at Athabasca University, such as the annual golf tournament and the Christmas events. He is well known for his theatrical contributions to Athabasca University and the community of Athabasca, having become a regular in the chemistry science shows for kids staged by AU professor Dietmar Kennepohl, as well as the local readings of the Christmas Carol, and Monty Python tributes.

“It was such a laugh to stand up there and show another side of the university, and another side of myself, and to see people really enjoy it,” he said of the Monty Python tribute events offered by AU staff in Athabasca and at conferences. “A lot of people really probably only remember me for that – which is just fine.”

Many of Athabasca University’s alumni will remember Davis as “the guy in the funny hat who read the bios” at Convocation. Students, staff and guests have all commented on Davis’ professionalism and skill as he recited thousands of biographies about the Athabasca University graduates who crossed the stage to receive their parchments each June.

Although, he’s passing on any official roles, Davis says he’s not quite ready to give up Athabasca University Convocation.

“I’m going to keep suggesting to people I keep coming back for Convocation because there are people graduating over the next few years I’d really like to be here to see,” he said. “I’m planning to try and get back to Convocation every so often, because it’s just a great event to come to.

“I’ll dress up,” he added. “People seem to be amused by that. But I’ll probably just sit at the back.”

If there is one thing Davis won’t miss, however, it is all the driving that has come with his position. At least twice a week for the last seven and a half years, Davis has driven back and forth between Edmonton and Athabasca to get to the airport, to attend a meeting, to mediate, or to perform some basic but essential task.

“The University’s been very helpful with me to try to enable that,” he said, “but it’s a big chunk of your time if you go back and forth in a day or two days. Basically four hours is gone. And it’s tiring and it’s wearing and it’s dangerous, and you haven’t even done any work yet. I think if there’s one thing I’m not going to miss it’s getting out onto Highway 2 so often.

He’s done what he can to make the best of it, though.

“Sometimes it’s productive. It’s good thinking time. If you’re giving somebody a ride, it’s a good time to reconnect with them. Sometimes you can get on the cell phone and catch up on calls. Sometimes I’m literally counting the kilometers and looking at my watch.”

Says it’s time for a change :

Davis has come to appreciate the Town of Athabasca’s relatively harsh climate, and rugged beauty, and says his experience here has helped him feel like a “real Canadian at last.” He will miss the people who have made him feel so at home, here; those who gave him furniture when he first moved, those who invited him to dinner, those who stopped to help when his car broke down by the side of the road. He holds warm memories of the fine AU staff members who have passed on in recent years, individuals such as Lori Oddson, Sue Rowlandson, and very recently, Dave DasGupta.

However, Davis says, it’s still time to move on.

“I’ve been here seven and a half years,” he explained. “My term comes up in a few years. It was a combination of thinking about where I’d like to be and what I’d like to do and what my future holds. It was while I was thinking about this that the job came up at Niagara College. It was a convergence of opportunity coming up and the thinking in my own mind of what I was going to do at the end of my time here.

“It wouldn’t be good for me (to stay), or for Athabasca. I would have ten years in the same role, and I think AU is due for a change. I think they will do very well in their search for their VPA.

“I’d like to think I was the right person for the institution at the right time,” Davis continued, noting he’s aware of his own weaknesses, but he’s also aware of his strengths.

“I’m not trained in education, the theories, the practices of education and distance education. But I know what I know, and I try to use due process to figure out the rest. I understand how to get the right information and talk to the right people to get the right information. I’ve been pretty open and friendly. I haven’t been too dogmatic or open handed. And I think I’ve tried to : (formalize) a lot of stuff that wasn’t that well documented or in place before and I think people have appreciated that because I think it leads to transparency in decision-making.”

He’s looking forward to all the “surprises” he knows he’ll find in Ontario, and he’s confident he’ll find good things too in Ontario’s wine region – despite its proximity to Toronto’s gritty brown skies.

“The people there seem to be extremely nice,” Davis said. “They’re very committed to the institution. Many of them started in Toronto and moved out and loved the place and will stay the rest of their lives. There’s a real sense that people go to Niagara region and never leave because they just find it’s the place they’ve always wanted to be. You hear that enough times to suggest that maybe that will be true for me, but I have no idea.”