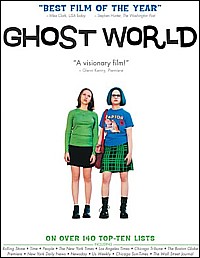 Do you ever get into watching those funny little films you just know are never going to have the big names? Sometimes called “art house,” these little gems have actors that you recognize, but aren’t multi-million-bucks-a-role actors. Instead, these films have wonderful character actors like Steve Buscemi, who plays Seymour in Ghost World.

This is a film I found to be touching for a number of reasons. It paints a world that I think so many of us can relate to.

The film was released in 2001 and is now showing on the Movie Central movie channels. Interestingly, around that time Steve was in New York and, as a former New York firefighter of four years, grabbed his old gear and helped dig out after the September 11th tragedy. But in this film, he’s just a loveable cranky guy who just can’t seem to score, and who doesn’t “have anything in common with 99% of humanity.” He hates modern music and collects ancient 78 rpm records. CDs are a horror to him. He sucks hugely at conversation with the opposite sex and knows he’s “a geek” to others.

A lovely young girl, Enid, played by Thora Birch, discovers Seymour. At first she thinks he’s just this eccentric guy, but slowly comes to want him in her life. She hasn’t done anything for herself in life — hasn’t discovered what makes herself tick. Some part of her wants to blow the city and go out and live somewhere else in the world. Since Enid’s home life isn’t the way she wants it and school is now a final chapter, she starts to express herself to Seymour after helping herself to a bottle of champagne in his fridge. Seymour has been putting up with a pretty blonde woman who has nothing in common with him; so he finally lets himself get swept off his feet by the young girl. Except after a hot night in his apartment, she decides to go into hiding and becomes even more confused about what to do.

Enid’s girlfriend, Rebecca, played by Scarlett Johansson has been waiting for Enid to make a decision on getting a job and even which apartment they’ll chose to move into. Since Enid is just as much a creative outcast as Seymour, she fails miserably at a local theatre job. (This is eerily familiar to me!)

Secretly, Enid isn’t sure she’ll agree to move in with Rebecca or not, but they’ve been friends for eons so she stays quiet.

Teri Garr gives a “different” style of performance as Enid’s dad’s girlfriend. When dad and his girlfriend decide to move in together at the end of the summer, that’s all too much for poor Enid. She sobs her way through the night, settles her feelings with her girlfriend and Seymour, and packs up to get on a bus.

As a lovely little touch, a regular character pops up throughout the film, sitting on a nearby bus bench. He sits there in his lovely business suit, convinced the bus will show up, day after day. The bus bench carries a sign saying, NOT IN SERVICE, but stubbornly our man continues to wait for the bus to leave town. Of course, if you can guess he gets the bus, and so Enid catches the next one.

This film is based on a comic book of the same name. I must be missing some very interesting comics!

One of the film’s producers is John Malkovich, and after seeing Being John Malkovich I really believe this is his kind of film. It is just as quirky and yet has just as much delight and wonder to it.

This film has a great many touches that make us aware we are all, in some way, not connected to the odd world around us. As a result we get closer to our characters and enjoy the results. Except one thing, I feel sorry for Seymour at the end”?he really was sweet and I think he should have gotten the girl!