Articles
The Voice
From My Perspective – And then the lights went out!

About a week ago, Edmonton experienced a particularly violent storm, one that resulted in power failures, and our LRT (Light Rail Transit) being shut down for almost a day when an underground portion of the route flooded. My daughter was relaxing and watching television, and I was just finishing up some work on the computer with the intention of joining her, when a loud rumble of thunder and immediate flash of lightning crashed very close overhead. Within moments, our lights flickered and our power went out. As the minutes ticked by, we resigned ourselves to being without electricity for a while and went to bed. Upon rising next morning, we discovered that the power outage had lasted several hours – fortunately we had a battery-operated alarm clock, since we almost certainly would not have got up in time for work.

Power outages don’t happen all that often, nor do they last long when they occur, but we are always well-prepared with flashlights and candles. Still, they are an irritation, an unwelcome interruption that interferes with your activities. My computer remained operational on battery power, but it was too hard on my eyes to work with the surrounding darkness. Watching TV was out, and we couldn’t go warm up a snack in the microwave. No fans to keep the house cool, and no relaxing whirlpool bath before bed. Although I tried to read in bed by candlelight, it was difficult to see, and I was ever conscious of the danger of falling asleep with a candle burning. Minor irritations for the most part.

Whenever we experience one of these rare outages, I always wonder what it would be like to cope if they lasted for a long time. Its fairly easy to cope on a small scale – bring out the candles, cook supper on the barbeque, etc.; but it’s quite another matter when companies that supply us with the “necessities” of life lose their power too. When grocery stores cannot keep food refrigerated, when gas stations cannot pump gas, when water cannot be safely processed, when mass transit is halted, and when hospitals are running on auxiliary power, to just mention a few – serious damage can result, in addition to heavy financial costs.

In reading reports of last week’s massive power outage in Toronto, New York, and the eastern coast of Canada and the U.S., I could not help but think back to 1965 when the first major power outage occurred in that area, and to 1977 – the legendary New York blackout. Both of these previous power blackouts had significant impacts (including a baby boom in New York 9 months later!), but they did not affect people in quite the same way as this most recent one. Last week’s is considered the biggest outage in North American history, affecting 50 million people, and in many ways, its impact is far more severe, given the increased reliance we have on electricity in every aspect of our lives.

For me, the most interesting part of the whole incident is the human response. As energy company executives scrambled to find the source of the problem, politicians on either side of the border were quick to lay blame. In an early news report, the mayor of New York insisted that the problem started in Canada, while in Canada the Prime minister’s office claimed that the reverse was true. It almost seemed like fault-finding was more important than working cooperatively to solve the problem. Gasoline pumps were inoperable in most locations and of those few stations that relied on older non-electrical pumping systems, many were selling gasoline at inflated prices. There were reports of looting, although nowhere near the scale experienced in the 1977 New York blackout. Opportunistic cell-phone owners were selling phone calls on the street at $2.00 a call, while street food vendors did a brisk business.

Once the lights began to come back on there were other issues. In spite of official pleas to use minimal power, many large companies kept their neon billboards brilliantly lit, and in many areas people ignored requests to conserve water and electricity. Politicians continued with their sparring, including Toronto’s mayor Mel Lastman, who prompted an outcry when he arrogantly insisted that Toronto should not have to experience the same rolling blackouts that other areas would as power was being restored, since Toronto is “the engine that drives the whole province, the whole country in fact” (Canada.com).

But generally it seems that people were responding positively, with a sense of neighbourliness and caring. On the CBC news coverage the first night, we were treated to scenes of a businessman with briefcase tucked under one arm, directing traffic in the middle of a busy Toronto intersection. This scene was played out repeatedly in other areas, with impromptu traffic directors of every age and walk of life stepping into the breach to help move things along. There were reports of restaurants bringing out bottled water to motorists stranded in traffic in the above-30 degree heat, and ice-cream parlours giving away cones before it all melted. We saw images of by-passers helping panicked passengers out of subways in New York City, reassuring them and keeping them calm. Many were forced to walk miles to get home, with one pregnant woman managing 80 blocks before a policeman passing by took pity on her and gave her a lift. Restaurants and grocery stores gave away food rather than see it spoil. Overall people pitched in and tried to help one another, and government officials credited the people of Toronto for the fact that very little looting or violence had occurred in that city and that everyone remained calm.

I couldn’t help but wonder how our fellow students might have fared. Many of them were likely working on assignments or even writing exams when the blackout occurred. Others were at work and may have been among those forced to walk miles to get home. Tonight I received an interesting email from a friend, a former AU student who has been accepted into master’s studies in genetics at a university in New York city. She arrived there a few weeks ago and is just in the process of getting settled in, with only one class started so far. She told me that they were without power for 26 hours. All the students were recruited to help out in the hospital since many regular staff could not get to work without the subways running. Students took on the tasks of transporting patients, delivering water and meals, doing lab pickups, even providing manual oxygen to patients when ventilators failed. Since elevators were not operational, all this was done by running up and down 11 flights of stairs! At the end of an obviously exhausting day, she described finding her way back to her apartment in complete darkness (flashlights had run out of batteries). Just getting across the street without streetlights was the first challenge, then she had to go up the stairs, trying to guess which floor she was on, and trying to find her apartment door in total darkness – and many others had to climb 32 flights of stairs or more to get home.

She made the almost comedic observation that when the power failure occurred at first, there were fears of a repeat September 11 attack – but once they heard that Canada was affected, no one worried anymore since, “no one wants to attack Canada!” In conclusion she noted that although classes were already behind due to the power failure – it had been an eventful and interesting start to her New York experience.

That is somewhat of an understatement, I’m sure. But her comments also illustrate how everyone pulled together calmly and with good humour to cope with a difficult situation. This is something we have seen repeatedly with recent major disasters – people banding together in a show of caring and compassion to help each other survive the situation, and it reinforces my faith in human nature.

Electricity is something most of us could not do without, and an event like this provides apt proof of just how essential power is to us. The question “where were you when the lights went out?” was a common indicator of how profoundly people were affected by the 1965 and 1977 outages, and this blackout will be no different. With our reliance on the Internet and electronic means of communication, we at AU are especially vulnerable to the effects of a power outage. Hopefully we won’t ever have to find out just how vulnerable. We hear environmentalists warning us of the importance of protecting and preserving our energy sources, but many of us don’t really listen until it touches us personally. This incident has made me stop and think about how important electricity is to me, and how different my life would be without it. Yes, I could manage without electricity. But I don’t think I would ever want to. 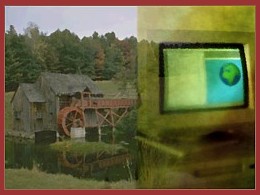