Articles
The Voice
How to Conduct a Successful Salon 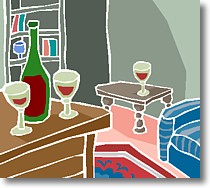 Conversation is the essence of culture and civilization. Throughout the ages man has exchanged legends around paleolithic campfires and rumours across the backyard fence. We have made idle chit chat over cucumber sandwiches at the vicar’s garden party and debated the fate of nations in solemn parliamentary proceedings. We have whispered in church, bantered on the surface of the moon, and spread malicious gossip about Wally, that gigolo from Customer Service, between toilet cubicles. Today, in the proliferation of book clubs, support groups, television talk shows and Satanic cults there is evidence the primal need for a good chin wag remains undiminished.

Nowhere is this more apparent than in the popular revival of the Parisian tradition of conversational salons. Throughout the world, small groups of people are stepping away from their computer terminals, shutting off their cell phones and pagers, their fax machines and portable dialysis equipment. Shedding their isolating technological cocoons, they meet face-to-face in convivial surroundings, enjoying the peculiar music of the human voice and sharing important ideas about topics as diverse as theology, flamenco dancing, experimental haberdashery, and marsupial husbandry.

I freely admit that in the past the closest I came to this tradition was my semi-annual poker night; really nothing more than an excuse to smoke cheap cigars roughly the size of atomic-class submarines and to drink enough gin martinis (hold the vermouth) to float said submersibles. In keeping with the zeitgeist, however, I and a few friends have recently launched our own weekly salon, and I would like to pass on to you some valuable advice.

To begin with, it is important to choose comfortable surroundings with pleasing decor that will enhance the conversational flow. My place, for instance, is filthy and small, and is decorated in a style I like to call Early Opium Den, which is why we meet at Wally’s condo.

Experienced bon vivants will tell you that pleasing food begets pleasing talk. Keep it simple. We have found that classic presentations such as European cheeses, seasonal fruits and vegetables, smoked oysters, and shrimp cocktails are invariably more appealing than showier and more outlandish fare. My Blowfish Surprise, for instance, was not well received, and brought about more than one threat of legal reprisal.

Of paramount importance, of course, is the selection of guests. Always try to invite people with a broad and diverse range of knowledge and interests. My cousin Vera, for example, is completing her doctoral thesis in an obscure field of quantum mechanics, whilst my friend Carl is easily amused by shiny things.

Try, also, to encourage the display of special talents. Aside from her academic interests, Vera is an accomplished mimic as well as an enthusiastic musician capable of capturing in spirit both the Elizabethan madrigal tradition and Norwegian death metal, albeit unintentionally and within the same Leonard Cohen song.

Provocative guest speakers will always spark lively discussion. Taxidermists, mimes, even politicians can provide interesting topical perspectives. At a recent gathering we were treated to a presentation from a local amateur dry cleaner who is currently engaged in translating the complete works of the tenth century Scandinavian epic poet, Ingmar Gokstad, from Swedish into Spanish and back into Swedish again.

Above all, invite guests who understand that effective listening is the mark of an accomplished Conversationalist. I have personally found that there is nothing more irritating than a boorish, verbose, self-absorbed lout who simply does not know when to stop talking, prattling on and on long past the point at which the listener begins to lose both interest and patience, tenaciously pursuing a stale idea, often using more banal clichés than I’ve had hot dinners; a trait immeasurably worsened in those cases in which the speaker pompously attempts to display a degree of perspicacity far beyond his reach.

Finally, and above all else, remember that the art of conversation is one that requires balance. Be both challenging and tactful. To disagree with one’s fellows, urging them on to more profound insight in defence of their ideas, is the very cornerstone of discourse. The application of the choke hold, however, is generally considered to be poor form.

And in case all else fails, stock up on gin.

Fly on the Wall—Vacuums and Their Potential