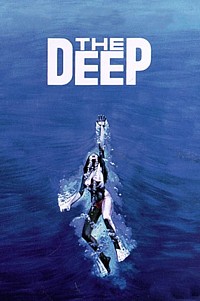 The price on this pocketbook is $2.25. That ought to give you a good idea of how old a story I’ve been reading. Indeed, the book by Peter Benchley (Jaws) hit the shelves in 1976. The cover promises that this is “the terrifying new novel by the author of Jaws.” As a fan of Beast, another Benchley novel, I wish I could say I found the terror. I guess I missed it.

The book centres on a pair of cocky tourists who decide to go to the Bahamas for a vacation. Saunders and his ladylove, Gail, piddle around with scuba diving but have faked certification papers. They know virtually nothing about diving. While on a dive the couple find a small glass ampule and bring it up. One of the local workers in their lodging, Slake, has an eye for the find, and suddenly the couple has an unwanted visitor. The finely dressed and well spoken man, Coffer, offers them a few dollars “for the glass.” He also claims the contents are unknown but the glassmaker is famous. The couple is stupid but thank heaven not that stupid! They insist on drawing some of the fluid to have it identified. Coffer says it will not work because the glass must be broken to open it and then it will be useless for his collection. The couple refuses to sell the ampule and make some quiet enquiries to find a local authority.

Soon they meet local St. David’s inhabitant, Treece. An angry man, Treece is in charge of his people. He is the local chief of the area and has been educated in England. He is well versed in the local dive sites and is considered a hero to his people. Other than his background with the island people we know little about this man, but eventually, an assistant to Treece clues Gail in about his life. The local island authorities shafted him years ago when he tried to turn in drug runners”?these drug runners then murdered his wife. As a result Treece still hates what drugs can do to people. So, when Treece realizes the ampules contain morphine (heroin in the blood) he fine tunes the couple’s diving techniques and gives them a history lesson they won’t forget. Since Coffer has promised to cause even more problems for the couple if they don’t bring up the estimated ten thousand ampules, they decide to work with Treece. They find incredible artifacts from an unknown Spanish ship along the way, and learn some pretty neat details about how coins were made and what happens to them underwater.

Along the way, Coffer’s men viciously abuse Gail and Saunders. They scrape them up some and tell them that reporting Coffer to the local authorities will be a useless waste of time, as he doesn’t officially exist.

Gail gets angry about their treatment and makes an attempt to turn in Coffer anyhow. She soon finds that Treece isn’t the only one being shafted by local government.

The underwater adventures in this book mostly offer a great deal of information on how to deal with a relatively tame shark and an angry barracuda.

Benchley’s information on treasure diving and underwater perils makes for interesting reading. The characters are fleshed out and believable. Where this book goes wrong is in its billing. The book isn’t terrifying, it’s suspenseful. The desperate need to cash in on Benchley’s past writing technique reminds me of the Julia Roberts and Brad Pitt film The Mexican. Reviewers were unanimous in complaining that the film had no romance, which was what the audience expected the film studio build up. Likewise, I’m looking for a great underwater creature in this book but there’s nothing. Even the artwork on the cover tries to imply the deep aloneness and therefore vulnerability of the ocean floor. So it’s a let down to find only a shark that shouldn’t have been killed in the first place and a barracuda that ought to have his own book!

So, is any of this plot starting to sound familiar? The Deep was made into a movie about the same time. Naturally the Columbia Pictures project was loaded with stars like, Nick Nolte, and Lou Gossett Jr. I only hope the film did better than the book did.

International News Desk – At Home: Toasty Texting – Around the World: Jaws II (or III, or IV, or V)