If I were to choose a campus-based university to attend, I doubt I could find a more attractive one than the University of British Columbia (UBC). Situated on a peninsula on the edge of the Pacific Ocean and surrounded by trees – the buildings range from old and elegant to avant-garde modern. Even the plainest, most utilitarian buildings are beautified by the stunning gardens surrounding them; gardens that bloom from March to November.

This was the setting for SUDS 2003 (Student Union Development Symposium), where some 60 student union executives from across Canada gathered to learn from each other how to improve the skills we bring to the governance of our respective boards. Parts of the discussion involved activity reports from other provinces, to give each participant a sense of what was happening across Canada. Representatives from CASA (Canadian Alliance of Student Associations) and CFS (Canadian Federation of Students) provided information and data on student loan reform, the Millennium scholarship, and other government support for PSE. The conference was hosted by the Alma Mater Society of UBC, who presented us with a well-organized and well-run four days of sessions and informal gatherings (according to the AMS with work must come play!)

Since the symposium encouraged attendance from the portfolios of President, VP Academic, and/or VP External, VP Shirley Barg and myself attended as AUSU representatives. With the exception of the representative from Grant MacEwan College, Shirley and I were a generation older than the other attendees. This generation gap was most notable in the conference scheduling, which was different from most other conferences I’ve attended. Rather than full day and evening sessions, SUDS sessions were short, with plenty of free time and night-clubbing allotted for. The idea probably was that the younger representatives would use these opportunities for some bonding by doing what campus-based university students traditionally do plenty of – partying! While many took advantage of this form of relaxation, Shirley and I were not the only ones who eschewed the evening party life, and we took advantage of every opportunity to discuss post secondary issues with student leaders like ourselves in between sessions.

We stayed at the university student residences, Gage Towers, which gave us a wonderful view of the ocean and the campus, and where we shared quarters with four others. The shared dormitories were quite nice, but the beds were made for students who are much younger and more resilient than I, and we had no telephone or television access. As usual, of course, I had plenty of AUSU work to do upon returning to the dormitory at the end of the day so I was kept busy. Unfortunately, although I had paid extra for Internet access, I discovered that it only allowed sending email if you had a UBC account, so although I was able to receive mail I could not respond. This meant I had to spend a lot of extra time finding alternative ways of dealing with urgent matters back at the office.

Shirley and I did participate in a couple of leisure-type activities while there. One afternoon, sessions ended fairly early and a large group of us piled into two vehicles and headed into downtown Vancouver. The other driver was a Vancouver resident, so I assumed he knew what he was doing, and followed trustingly. Unfortunately we hit downtown Vancouver during the peak of rush hour traffic. He pulled into a parking spot and called us on a cell phone to tell us to find parking and they would meet us at the end of the block. This was easier said than done. After driving almost all the way down to the wharf with no success, I tried to circle back onto Burrard and Davie where we were to meet the other group. We navigated one way streets and “no left turns,” circling block after block in an attempt to retrace our steps.

Finally we got within sight of where we had left the other vehicle, only to have them call and tell us they had been forced to move from the parking spot (thank goodness for cellphones!). They gave us further instructions to find parking on the east side, another block down. Once more we began the block circling process. This time we located them, parked in the only empty spot on the street. I dropped off all my passengers, and they instructed me to drive up to the end of the block where there was “sure” parking. Traffic surged behind me, and I drove off, only to discover that what I thought was an empty spot was a loading zone!

Once again I navigated one way streets in heavy traffic, trying to wind my way back to find the rest of the group. Some ten minutes later, I finally rounded the corner once again to see them all patiently waiting by the curb. This time they told me that if I went around one more time they would try and hold a spot. Sure enough, after yet another traffic go-round, I came around the corner to see all ten of them standing in the street, holding the only empty parking spot on the block open for me! After I parked, we all enjoyed a good laugh at our parking attempts and took a picture beside the car before embarking on our downtown tour. 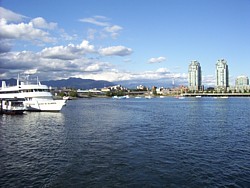 Unfortunately, by this time it was quite late, and we had only about an hour left before we needed to return. Shopping in downtown Vancouver is a very cool experience – there are so many unusual little shops, such as one massive vintage wear store that I could have spent days browsing in. Shopping with a party of ten, however, is next to impossible, particularly when that party is a group of students of completely diverse personality types from across Canada. It was fun, though, and all of us were sorry to have to go back to the campus residence for dinner.

On Wednesday evening, we also enjoyed a harbour dinner tour. For several hours we cruised the harbour, beginning at B.C. Place and cruising from False Creek up through English Bay, around Stanley Park, under the Lion’s Gate Bridge, and back. The Vancouver harbour is breathtakingly beautiful, and it was alive with other cruise boats, dragon boats, and ships of every size and shape. Our Vancouver hosts pointed out areas where real estate begins at $1 million, and high rise apartments where local celebrities live. I wandered the boat, meeting people and talking about their different experiences at their universities across Canada. Dinner was excellent, but drinks were incredibly expensive – even water was $3.50 a bottle. 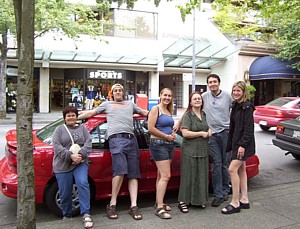 One popular nearby attraction to the university was Vancouver’s Wreck Beach, a nude beach within walking distance. It didn’t particularly interest me, although I did go for a walk along the rocky beach north of the campus, collecting a neat handful of rocks as a souvenir. I also took advantage of the Tuesday night free admission to visit the UBC Museum of Anthropology. One of the most impressive aspects of the museum is the Haida totem poles that greet you as you move through the entranceway and into the glassed back wall of the museum. They are stunning to see, far taller than one would ever imagine from photographs, a testament to the creative skills of their builders. The museum boasts a huge collection of historical and anthropological relics from all over the world, and the sheer quantity of items was overwhelming. Far more than just a few hours is needed to truly appreciate the incredible diversity of the museum’s possessions, and I felt a twinge of envy for those UBC anthropology students who have the privilege of actually studying and cataloguing these objects.

Although a closing banquet was planned, as well as another evening of nightclubbing and an optional Whistler’s retreat (a ski resort north of Vancouver), I left immediately after the final session on Thursday, since being without the capability of sending email for four days meant a heavy backup of student union work awaited me on my return. Skies were unusually clear during the flight home, and as I mulled over the events of the conference, weighing how these could be used to benefit AUSU, I was treated to a spectacular view from above.

Next week: We get to work: Conference session overview, including presentations by VP S. Barg.