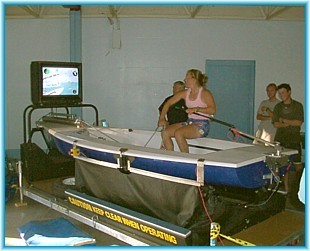 The Kingston Olympic Harbour (left) was barely visible on the first day of the Canadian Olympic-training Regatta, Kingston (CORK). Hundreds of sailboats came from all over the world to sail in series one, which took place from August 16-20.

The classes of boats in series one included Laser’s, Laser Radial’s, Laser 2’s, Bytes, 29er’s, 470’s, 420’s, Tornado’s, Europe’s and Fusion’s. According to John Curtis, the competition in CORK was not as good as he had hoped it would be this year. He speculated that this was due to the fact that many of the top sailors are busy getting ready for the World Championships that will be taking place in September in Cadiz, Spain. John and his partner Oskar Johansson will also be competing at the World Championships in the Tornado class, but since they are residents of Kingston they wanted to compete in their hometown event. The pair is also running a campaign for the 2004 Olympics in Athens, Greece and they hope to qualify for the Olympics by placing in the top 12 at the World Championships.

Despite the lower than expected number of top competitors, the event was still very busy and added quite a bit of excitement to the small town of Kingston, Ontario. There was also a larger amount of younger sailors who attended the event for the first time this year. Six young sailors, in particular, traveled all the way from Singapore and missed an entire week of high school – Singapore’s school schedule runs on a time line different than ours – to sail in the Byte class. According to Daniel Li Shun Hui (one of the Singapore sailors) the sailors – made up of the top three female Byte sailors and top three male Byte sailors in Singapore – received funding from the Singapore Government to come to Canada and compete in the event. 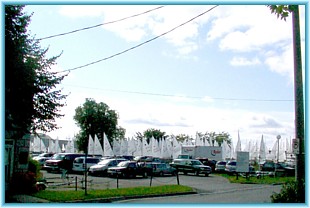 At the end of each day during series one there was a Virtual Sailing Simulator set up by Bill Visser on behalf of Performance Sailcraft 2000 and the Canadian Yachting Association (co-owners of the simulator). Bill Visser commented that the simulator, which was designed at Melbourne University in Australia, is the only one of its kind in North America. It was designed as a training, boat development and boat conversion aid and is currently being displayed in order to introduce people to the world of sailing. The simulator was a big hit at CORK and many of the sailors who had already been out sailing all day hopped in to give it a try. 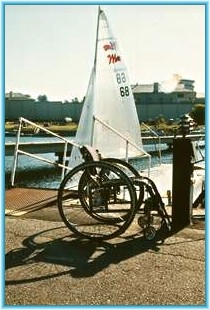 Series two of CORK, which was considerably smaller than series one, took place from August 21-24. There were only 27 boats competing in the Finn, Fireball, Flying Dutchmen, I-14 and Martin 16 classes. The harbour seemed like a ghost town after the huge crowd from series one was gone. Fortunately, the small number of boats in series two turned out to be an advantage for many of the disabled sailors in the Martin 16 class. The Martin 16 is an unsinkable sailboat that can be modified for use by people with disabilities. Some of the extra equipment currently available includes the Autohelm Windlass System, which is a modular, self-contained, portable power-assisted steering and sheeting system and the Sip and Puff Module, which allows high-quadriplegic sailors to control the boat by breathing into a straw mounted on their chest. There were several disabled sailors sailing in series two who benefited by the extra attention they were able to receive by the volunteers. According to Chris Rostant, a volunteer, some of them needed the assistance of volunteers to rig and de-rig their boats and others also needed help getting in and out of the boat. Several of the disabled sailors who competed in series two went on to compete in the 2003 Mobility Cup – an international regatta for sailors with disabilities – in Ottawa, Ontario.

A Look at Canadian Sports this Month