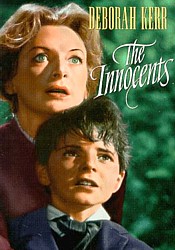 This incredible film is a remarkable version of Henry James’s The Turn of the Screw. The 1961 production is in inky black and white and is still one of the most effective ghost stories ever filmed.

I’d never seen the film but I’m wild about Pamela Franklin’s work so I poked my nose in for the hot summer afternoon. Originally this film was promoted as the first truly “adult” chiller in film, because of its portrayal of the Freudian anxiety that fuels the story. It did a good job although some of it may seem tame by today’s standards. Nevertheless, the psychological world of fear and dark secrets grabs you from the first moments of the film. It then clouds the boundary between reality and imagination.

This is one of the best performances I’ve ever seen from Scottish-born Deborah Kerr. As Miss Giddons, she plays a devout but somewhat uptight spinster who accepts a position of governess for two orphaned children. Their uncle (played by British screen great Michael Redgrave) is forthcoming about having no interest in being tied down by two “brats.” So Miss Giddons arrives at Bly House. It is a lavish yet shadowy estate. She finds young Flora (played by an incredibly young Pamela Franklin) and her brother Miles (Martin Stephens, also in 1960’s Village of the Damned) living with a good-natured housekeeper (played well by Meg Jenkins). The children have lost one governess but nobody is willing to tell the new governess what happened. As she’s very curious it continues to be an unanswered question.

Bly House seems to be an ideal place to raise children, except for the odd voices Miss Giddons hears! As she starts to imagine or uncover the truth about the former (dead) groundskeeper and the previous governess, she begins to imagine or find that her young charges are being controlled by a devious plot of the ghostly visitors. The governess isn’t sure what’s going on until she too sees a specter in the lake. The question of Miss Giddons imbalance is left hanging and never truly tackled by anyone. Her questions to the children are ignored and they firmly deny seeing any ghosts about them. The far away looks in their eyes are the only “proof” she has that the children are seeing the ghosts.

Ghostly images show up in mostly fleeting glimpses, and the outstanding Cinemascope photography of Freddie Francis is assisted by his use of special filters to subtly darken the edges of the screen. This makes Bly House a picturesque mansion during the day, but a terrifying dark web by night. Sound effects and music are used to make you stay connected to this film, even if you don’t like old black and white films. Director Jack Clayton, took a good script by William Archibald and Truman Capote, and kept a logical pace to emphasize the reality of the fears in James’s story. The result is a masterful film “? it reminds me of another Pamela Franklin film that hasn’t played in ages, 1973 British project, The Legend of Hell House – but that’s another review! (catch that one for the late Roddy McDowell’s most subtle performance and best work).

The period costumes and magnificent settings are a huge help in making The Innocents gel for the viewer. It is much better than some of Hollywood’s recreation of books (such as the dreadful Allan Quatermain movies!) The film really creates a world in a past century where life seemed so much simpler. But then it tackles the extreme repression that these people had to live with. Without actually bringing in a character to fully explain the sexual repression that poor Miss Giddons experienced we see the tension in her eyes. We clearly understand the loss of privacy as she is forced to sleep in her little charge’s room. I also don’t remember any time off for the woman.

Kerr gives an outstanding performance and the final kiss and shriek at the end are beautifully executed. Unfortunately I find myself wondering what the author intended for the reason of the child’s death. I then wonder what happened to dear Miss Giddons.

If you get a chance to watch this lovely film, do. I hope you find it to be the excellent work I did. I caught the film on Canada’s Learning Channel. Meanwhile, I’m going to finish one book I’m reading, cough up a review and then go find The Turn of the Screw.