Articles
The Voice
Do you own your body parts? 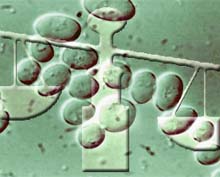 Suppose your physician diagnosed you with a disease, let’s say leukemia, and recommended, among other treatments, that your enlarged spleen should be removed to prolong your life. He asks you to sign a consent form, which you do, and he performs the operation, removing your body part. For seven more years, at your physician’s direction and upon his representations that such visits were necessary and required for your health and well-being, he has you return for follow-ups in which he removes samples of your blood, blood serum, skin, bone marrow aspirate, and sperm (or ova, if you are a woman).

Now let’s suppose that at the very beginning of the period throughout which you were receiving treatments from your physician, he discovered an anomaly in your cells, one with great potential commercial value if properly developed through genetic research. You learn that he knew this information before he removed your spleen and throughout the entire time he treated you, but he failed to inform you of this fact. Nor did he tell you that he had been utilizing your cells for research and had in fact applied for a patent on a cell-line established from your T-lymphocytes. Six months after your last doctor-patient visit, your physician and several other parties (a research scientist and the regents of a university) were granted a patent on the product whose genesis was in fact your bodily tissues”?tissues removed without your informed consent. The potential profits for the holders of the patent could run into the tens or hundreds of millions of dollars. Would you sue? If so, on what grounds?

Does this sound like fiction to you? Would you be surprised to know that the facts that I have outlined above come out of an actual court-case heard before the Supreme Court of California; a seminal case that has been studied and debated since it was published in July 1990; one that has had far-reaching implications to scientific ethics and human rights. The case, which has persuasive but not precedent-setting weight in Canada, determined whether a person (patient in this context) has a legally protected property interest in his or her own body and its products. As a matter of fact, I am in the University Of Saskatchewan College Of Law Library studying it for tomorrow’s Property Law class right now: Much of what follows comes from the actual published decision of the court:

In the actual case John Moore, the plaintiff, underwent treatment for hairy-cell leukemia at the Medical Center of the University of California at Los Angeles beginning October 5, 1976. After hospitalizing Moore and withdrawing extensive amounts of blood, bone marrow aspirate, and other bodily substances, Moore’s physician, Dr. Golde, confirmed the hairy-cell leukemia diagnosis. At that time all of the defendants, including Golde, were aware that certain blood products and blood components were of great value in a number of commercial and scientific efforts and that access to a patient whose blood contained these substances would provide competitive, commercial, and scientific advantages.

On October 8, 1976, Dr. Golde recommended that Moore’s spleen be removed. He informed Moore that he had reason to fear for his life, and that the proposed splenectomy operation was necessary to slow down the progress of his disease. Based upon Golde’s representations, Moore signed a written consent form authorizing the splenectomy. Surgeons at UCLA Medical Center removed Moore’s spleen on October 20, 1976. Moore returned to the UCLA Medical Center several times between November 1976 and September 1983 at Golde’s direction. On each of these visits Golde withdrew additional samples of blood, blood serum, skin, bone marrow aspirate, and sperm. On each occasion Moore traveled to the UCLA Medical Center from his home in Seattle because he had been told that the procedures were to be performed only there and only under Golde’s direction.

Throughout the period of time that Moore was under Golde’s care and treatment, the defendants were actively involved in a number of activities which they concealed from Moore. They were conducting research on Moore’s cells and planned to benefit financially and competitively by exploiting the cells and their exclusive access to the cells by virtue of Golde’s ongoing physician- patient relationship.

Sometime before August 1979, Golde had established a cell line from Moore’s T-lymphocytes. On January 30, 1981, the regents of the University of California applied for a patent on the cell line, listing Golde and another researcher named Quan as inventors. By virtue of an established policy the regents, Golde, and Quan would share in any royalties or profits arising out of the patent. The patent was issued on March 20, 1984, naming Golde and Quan as the inventors of the cell line and the regents as the assignee of the patent (U.S. Patent No. 4,438,032 (Mar. 20, 1984)). John Moore was completely excluded from any claim on any potential products developed from his cells.

Not surprisingly, Mr. Moore launched a court action against his former physician and the other co-defendants. He did so on 13 grounds, all except one of which were thrown out of court for various reasons. The only cause of action that the Supreme Court of California ultimately recognized was based on the physician’s failure to disclose such interests that may give rise to a cause of action for performing medical procedures without informed consent or breach of fiduciary duty. The court’s decision on that aspect of the case is not too surprising; however, its dismissal of the plaintiff’s charge of conversion is.

Moore had claimed that the defendant’s actions amounted to the tort of conversion, which is loosely defined in the common law as a tort of wrongful possession or disposition of another’s property as if it were ones own. A “tort” involves, whether intentional or negligent, a violation of a legal duty, imposed by statute, contract or otherwise, owed by the defendant to the person injured (the plaintiff). Without such a legal duty, any injury is damnum absque injuria – injury without wrong (damages can not be claimed). In order to establish a conversion, a plaintiff must establish an actual interference with his ownership or right of possession (property rights), and when a plaintiff neither has title to the property alleged to have been converted, nor possession thereof, he cannot maintain an action for conversion.

The majority of the court found that John Moore did not have ownership rights, or the right of possession, over his cells once they had left his body. In other words he held no proprietary rights in his own body parts and his conversion argument failed. So, in answer to the question raised by this article’s title, according to the Supreme Court of California at least, a person’s body parts, once removed, are not personal property under the law and are not the basis upon which proprietary actions in tort or otherwise can be sustained. It should be noted that there were strong dissenting opinions from a minority of the court. You can read the full decision of the court at http://biotech.law.lsu.edu/cases/consent/Moore_v_Regents.htm

Wayne E. Benedict has a varied career history and strong links to the Canadian labour movement. He is working part-time toward his Bachelor of Human Resources and Labour Relations at Athabasca University. He is a fulltime first-year student of the University of Saskatchewan College of Law. For a more detailed writer bio, see The Voice writers’ feature page, at: http://www.ausu.org/voice/authors/authorfull.php?ID=7. If you would like to send article-feedback to Wayne, he can be reached at wayneben@sasktel.net