It’s hard to believe it’s over, isn’t it? Already the sun is setting far earlier than seems right, and a much cooler breeze is nipping at the bare ankles of those die-hards who aren’t ready to admit that winter is coming.

For some in the AU community, this summer was laid back. However, time doesn’t stop when we’re on vacation. The last few months have been more than eventful. Starting from the beginning :

Right around the hubbub that is Convocation at Athabasca University, Natural Sciences and Engineering Research Council of Canada announced that AU’s own Drs. Peter Holt and Oscar Lin were selected to receive funding that will allow them to continue their research projects. Peter will continue his research into human-computer interactions within e-Learning environments; Oscar is working on a computer-based learning agent that will allow AU students to more effectively adapt courses to their own learning needs.

This summer was doubly significant for Dr. Oscar Lin, as he and his family became Canadian citizens. They weren’t alone, either. Doug Kariel, Head of AU’s Technical Services and Systems, also pledged allegiance to the Canadian flag at the same citizenship ceremony. Congratulations Oscar and Doug!

Of course, Convocation 2003, held June 13 and 14 at AU Central, was an unparalleled success. Over 300 graduates, plus staff, faculty, friends and dignitaries, packed the Convocation tent over the two days to celebrate the accomplishments of AU’s finest. Read more here.

Athabasca University also experienced some bittersweet moments this summer. After seven years in the Vice-President, Academic’s chair, Alan Davis bid a fond farewell to the AU community as he left to take up his new position as V-P, Academic at Niagara College in Ontario. Read more here: http://www.athabascau.ca/frontpage/aland.htm.

Particularly difficult was the passing of Dave DasGupta. It was July, and Dave was just eight months away from his twentieth anniversary with Athabasca University when he died of a heart attack. In the words of former V-P, Academic Alan Davis, Dave was an engaging and dedicated tutor in mathematics, management science and economics in the Centre for Science and the School of Business from 1984-2003. He was recognized for his dedication in 1996, the year he shared the Sue and Derrick Rowlandson Memorial Award for Service Excellence with Lloydene Eherer.

Also in the 25-year anniversary file is AU history professor Alvin Finkel. Alvin began writing AU’s first history courses back in 1978 and has become a specialist in developing textbooks in Canadian history. Those who RSVP’d in time will be attending a celebration luncheon at University House on Wednesday, September 17. Look for more on Alvin’s 25 years at AU in your next edition of the Insider.

The Athabasca University Geophysical Observatory has been collecting auroral and weather activity in the Athabasca area since its installation last year. However, Dr. Martin Connors informs us, that weather information is now available on-line. Check out Athabasca’s up-to-the-minute weather conditions by logging onto http://weather.athabascau.ca

You can also check out the latest on the eduSource Canada project by clicking on http://edusource.athabascau.ca.

The non-academic staff respresentative on Governing Council is now Nicole Belland, Student Recruitment and Liaison Assistant. Athabasca University thanks Diane for her years of dedicated service and wishes her the best in everything. AU also welcomes Nicole and looks forward to all she will contribute to AUGC.

As for the future, there are some new initiatives on the horizon. As one of several moves afoot to increase discussion and interaction among AU community members, the Insider now takes letters to the editor. Share your thoughts on what you see here, or other matters relating to University life. Naturally, the laws of libel and defamation apply to the Insider, and will be considered before letters are published. Send your brief – and signed! (nothing will be printed anonymously) – letters to insider@athabascau.ca. We look forward to reading what you have to say! 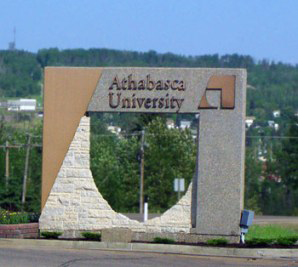