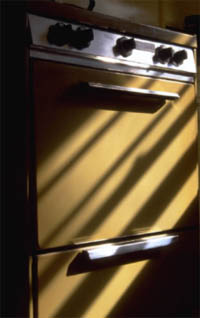 I moved this fall into a new house – new to me at least. As you likely know, one of the many perks of being an Athabasca University student is the ability to move cities without changing schools. I have moved several times, twice to different cities, traveled Europe and done classes in at least four different times zones. Moving, or traveling of any kind, epitomizes possibility at its greatest. It presents to us a chance for experiencing new things– a chance for fresh starts and broadened perspectives.

My new house, along with experiences and perspectives, has new appliances. Gratitude overwhelms me, honestly. Here I am, with a new home and great appliances, so I won’t complain. The problem is, that I think the appliances are better than me, especially the oven. I don’t deserve it.

I actually just learned how to cook and I spend time hoping people will forget that I ever did. I would rather be known for other attributes. I’m sure this is a modern feeling. Generations past cooked whether they wanted to or not. There were no easy prepared pre-packaged dinners or fast food alternatives to choose from. Indeed, cooking was and still is a life skill, as well as an economic asset (Eating out is expensive!). There is a certain pressure to be able to cook good meals. I fear my new appliances have made alliances with this growing pressure and if I don’t learn how to cook better, my oven will make me look like fraud.

I see the value in cooking, I really do. I see the value in someone taking time to prepare a meal in which your family sits down to and spends time with one another. I almost believe that the way to a man’s heart is through his stomach. I am secretly flattered by someone complimenting my cooking and am impressed by other’s gourmet meals.

The bottom line, however, resides in the fact, that cooking never interested me.

The first time I cooked a meal for my family was for a junior high Home Economics assignment. It seemed to take so long to get everything washed and chopped and prepared that I skipped a few steps. My mother diplomatically reminds me that my family only ate the meal to encourage me to try again. I didn’t try cooking again for a few years. I started with something easy– homemade pizza. When it caught fire in the bottom of my oven due to neglect, I called a friend to ask her if it was baking soda or powder that put out fires and made myself a sandwich.

Ergo, it became part of my reputation, part of what was expected out of me, that I didn’t cook. I did other household chores pretty well and it’s not as if I am incapable of cooking, I just get distracted.

And isn’t that the tune of today’s world? Opportunities are relentless. It’s hard to narrow down what we will be good at, when we want to be good at everything and have more opportunities than ever to try things. The trick with cooking is that when practicing one cannot do these ‘everythings’ all at once. This is how things burn.

Of course, as I moved out and tired of sandwiches, there came a point one day when I looked down at the meal I was serving with surprise. I had learned how to cook. I didn’t even mean to. Emeril, Martha or that Naked guy would not be impressed, but nothing caught fire and my meal was, if I may say so, delightfully edible.

The new appliances, however, put things on a whole new level. Now, when someone walks into my kitchen, instead of commenting on the paint color or family pictures, they eye up my oven with interest. The oven raises the standards. The oven sets certain expectations. One who uses the oven must be able to cook well. It has settings I need definitions for. In short, I am intimidated.

The first few times that I have used it have gone smoothly, but it took twice as long to roast my potatoes so I’m sure I don’t have it on the right setting. Every ounce of my common sense tells me to read the manual. I am a University Student, surely I can understand some appliance jargon– a little harmless oven banter. That’s when I remind myself, that as long as I don’t know how to work the oven properly, I have a temporarily valid excuse not to.

Of course, it is only a temporary excuse. You could say that the oven has broadened my perspective. Last week, I experimented with twice baked potatoes and tonight I will serve sea bass in a honey-lime glaze. In spite of myself, I admit this cooking thing isn’t so bad. Like moving and traveling, with cooking you benefit the most by trying new things and having fresh starts.