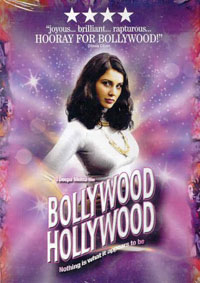 When I first saw this was a Canadian production I wondered if I was going to be looking at an “artsy” film with people staring out the window. I can’t count how many times I’ve watched films like that and felt annoyed at my fellow Canadians and their idea of film making. My how times have changed! This film is a hoot! And it doesn’t matter if you’re not from an Indian background. Just cut loose and laugh!

Rahul Seth (Rahul Khanna) is a handsome millionaire who is very westernized, much to his mother, Moushumi Chatterjee’s, chagrin. When the family meets his western pop star girlfriend, played by Jessica Pare, she gets frosted by these folks. Grandma-ji, played by Dina Pathak, loves to quote Shakespeare but refuses to speak English to her grandson’s white girlfriend, and mum isn’t much better. Dad is dead and there is a depressing shrine to him in mum’s bedroom. Poor Jessica runs out the door after trying to please the family. Faster than lightning, the poor dear dies in a freak levitation accident. The scene of her death is well done and everyone’s reaction is just so perfect.

Since Rahul is older he is supposed to marry first, but his sister, Rishma Malik, is scheduled to marry. Mother decides to pull out all the stops and threatens to call off his sister’s wedding unless Rahul finds himself a nice Indian girl.

Rahul talks it over with his sister who reveals she’s pregnant! Not good.

So to keep disgrace from hitting the family Rahul starts meeting girls, but no one strikes his fancy.

One evening he goes out to a local bar playing some Bollywood films and gets picked up by a very pretty girl, Sue, played by Lisa Ray. Sue doesn’t happen to look like her family is from India, so he assumes she’s from Latin background. She comes from a poor family and isn’t happy in her circumstances. She is being an escort for extra cash. She uses the classic lines on Rahul, “I can be anyone you want me to be.”

He scolds her one-minute “You’re not from India are you?” and confides his loss the next. The situation then becomes a bargaining tool. For the next little while she will be his “fiancé” and he will pay her. We soon find out that Sue is very good at getting what she wants. She gets more money; she gets nice clothes and even some pretty nice jewelry! Then comes meeting his family.

She strides up to his huge family home and we discover she has a heart to go with her tough negotiator’s mind. Later, she tries to explain her background to Rahul, but he shuts her off.

Now comes some serious fun! She knows to call his mother Mama-ji, the common term of respect. Rahul is confused but he says nothing. Soon there is a request for more fun in the party. Sue starts to sing in Indian with a live band and this begins a great production number. Dancing and singing abound. The fun begins to rock and we can just about get up and boogie to the music. Rahul is of course stunned – Mama-ji is thrilled!

The whole family starts to fall for the new fiancé, and although we start to get the idea that although Sue dislikes the typical Indian male personality she is falling like a stone off a bridge for Rahul.

Throw in a cross-dressing chauffeur, played by (Ranjit Chowdhry) who is just hilarious and has his own musical numbers in the film and we start to watch the Indian world spoof itself to the nth degree! Hey, what a hoot! I don’t remember Canadian films like THIS!!

When Rahul starts to question his love for Sue, the poop starts to fly into the fan. Will he be smart enough to win her back? She takes off and goes home, leaving everything he has bought for her and the money he gave her behind. What more does he want? It’s the typical show of unending love! So he jumps in the limo and goes to her house: only to have the dad stop him. Eventually he finds her on the balcony and jumps up for a romantic, Pretty Woman-style proposal. She turns him down and disappears. We don’t know what will happen but he gets in his limo for a while and then decides he has to go back for a second try. Except he finds out he’s been hijacked by Sue and his chauffeur has disappeared!!

Mush and kisses all around. What a great laugh! Even if you’ve never seen any of the traditional films of Bollywood (India) that NEVER seem to change format, I believe you’ll appreciate this film and the fun music and good performances. Direction and tempo are well done, nothing drags, and humour abounds!

You can also check out the website and listen to some of the music:
http://www.bollywoodhollywoodmovie.com