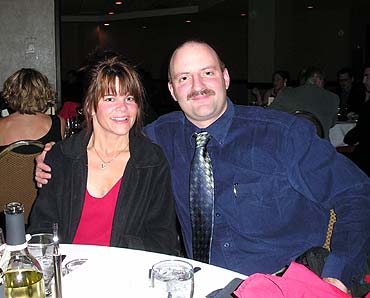 On October 4th I went shopping for some clothes in which I would more readily fit in with a law school crowd. After decades of wearing work boots and coveralls there is no way that I could jump right into a three-piece suit and feel even moderately comfortable. So, my wife led me to Work Wear World and had me try on “casual” wear. Although the corduroy shirt felt as though it would slowly strangle me, it was otherwise comfortable; as were the pants and shoes. I didn’t complain about the tie, but inwardly I was scrunching up my nose:

Thursday October 9th was the first-year law students’ banquet. It is an annual function with over eighty years of history behind it at the University Of Saskatchewan College Of Law. After briefing cases all day, I swung by to pick up the baby-sitter and headed home to get into my new duds”?Linda was already looking beautiful in her new dress. I was feeling great as I donned the apparel until the point I was ready to put on the tie. I’m embarrassed to admit that in 38 years of life, I have never learned to tie a tie. In my youthful career as a door-to-door vacuum salesman I wore a suit and tie, but I had my father tie it for me and would repeatedly loosen and tighten the same knot day after day. On the day of the banquet, that option was not open to me, as my father now lives two provinces away. Not knowing anyone else in Saskatoon who could tie my tie, I realized that the task would fall to me. It’s not as if I didn’t have any foresight with regard to the dilemma, as I had picked up a small tie-tying direction card from a suit-store days before; unfortunately I hadn’t set aside the time to practice before the big night.

It wasn’t long before the confidence that I had initially felt when pulling the tie from its hanger was long gone. While grasping the two ends of the tie and staring at the cardboard cartoon directions I soon felt the blood rushing to my head in that familiar explosion of frustration. Until that day, I didn’t know that anyone could actually draw pictures in a foreign language, but there it was. The progressive cartoons looked easy enough until I tried to emulate them. One time I would end up wrestling with a silk snake, coiled at my throat and ready to strike; the next time I would fashion a perfect noose with which I felt more and more like hanging myself from the towel-rack. Soon Linda got into the act, but she had no success either. After about twenty minutes, and just before I gave up and went without it, I managed to twist it into something resembling the picture on the card. The knot was the size of a baseball, but with much manipulation I managed to minimize, shape, and configure it into a passable accoutrement.

We had a great time at the first-year banquet. The food was great. There were lots of toasts: from the upper-years to the first-years; from the first-years to the upper-years; from the upper-years to the faculty; from the faculty to the first-years: Well you get the picture. There were legal guest speakers and the Dean of the College of Law announced and presented entrance scholarships to numerous first-year students. The best part of the evening was spending quality time with my wife, and talking to fellow students and their partners about issues other than the law. I couldn’t help but notice that the knot in my tie was markedly larger than those of my classmates; I guess I have a way to go in learning to dress like a lawyer. Then again, before I left BC my good friend Dave Veniot predicted that I would come back from law school in Saskatchewan looking like Matlock in my rumpled, ill-fitting suit. He may be right in that regard, but I won’t be arriving in the crop-duster biplane that he described!

From Where I Sit – No Brainer