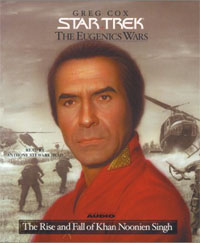 The subtitle tells you where you’re headed with this book: “The Rise and Fall of Khan Noonien Singh.”

Anyone unfamiliar with the theme of this 2001 book is probably not a viewer of the Star Trek films or original series. The brilliant character of Khan was played intensely and magnetically by Fantasy Island TV star, Ricardo Montalban in both the original series and later in the second Star Trek feature film.

Khan has handed out hellish dreams for Captain Kirk. The book is true to the original series episode that birthed the Khan character.

Obviously author Greg Cox felt the character deserved some more attention since he provides two volumes of much talked about backstory that gripped me from the first page.

In the story, Captain James T. Kirk is reviewing Earth history that is some 300 years old. Khan was first shown on the series episode, “Space Seed”, coming out of a hyper sleep situation on a “hijacked” cargo ship that had been in space for hundreds of years. Most of his superhuman followers on board made it as well but a few were unable to be saved due to mechanical problems. Khan became a true terror on board Kirk’s ship since he was a superior creature created by genetic tinkering.

The tinkering is exactly where we start in the book. Is Khan a creature worthy of two volumes? I will quote my husband’s buddy who commented at a recent party where the book was on a coffee table. “So the guy reading it said it was a really good read.” Okay, I’m not sure those were the EXACT words out of Darrel’s mouth but they are the general gist of the remark! (Apologies Darrel!)

The book begins a short while after the TV episode left off – starting in 1974. It actually ties in several plots from the old series as well as true moments in Earth history and does an amazing job of showing us the early years of Khan. I hope that actor Ricardo Montalban knows about these books as it is well written and a true homage to his brilliantly-played bad guy.

Do many of us ever think how much the historic moments in our world create the future? Probably not. This book does a great job of making us take a heads up.

Cox’s theme would make late Star Trek TV producer, Gene Roddenberry, pleased. Cox has captured the original characters easily and the descriptions and dialogue are right on the money. We easily imagine the late actor, DeForest Kelley, a.k.a. Dr. McCoy, muttering his complaints about traveling by transporter beam, or being annoyed at tinkering with genetics. Cox uses the series’ characters to swing us into the book’s plot, where a colony on a planet wants a meeting to impress the Enterprise to speak on their behalf for acceptance into the Federation. They hope that their brilliant genetic skill and the artificial atmosphere they created on their planet will make the Federation interested in their work. Kirk, of course, can’t forget the last run in with genetics he had:with Khan Noonien Singh. Khan was a genius, a superman, and a tyrant. Naturally Kirk is worried that another genetic tinkered colony will make the same mistakes that Khan and his followers did.

Where did Khan come from and how was he engineered? That question comprises the beginning of the book. Cox has taken the vague suggestions from the original episode and the film and filled in the details. He keeps true to type and makes the likelihood of the underground facility in India sound amazingly possible. I found myself wondering if there were enough nuts in the world to really pay for super children to be engineered with DNA tweaking but I found myself convinced with one simple line of dialogue. Cox states that the rich will pay almost anything for thier to children begin a change in the bloodline to enhance the family gene pool. It was worded in a way that made me accept that quirkiness of the rich. I have seen some stories of very odd people out there who will pay for all kinds of things the rest of us might see as fantasies of the paranoid. So, who knows what’s real and what’s just the subject of a Science Fiction book?

Cox has added in new characters to make us aware of his creative mind, including a mother for Khan. A brilliant scientist, Dr. Kaur is all too human but a driven woman with a determined mind.

Also added are her flunkies, which include a nervous oriental character who easily fumbles and bumbles when women show him attention and a token big “gorilla” who turns into a physical brute to invite some danger into our world.

Cox also addresses the mistakes of genetic tinkering by illustrating both simple and severe mistakes in some of the created creatures.

We get a chance to refresh our memory about characters from other episodes and I respect how Cox has put them together with clear connections between them. I found myself eagerly turning the pages and reluctantly putting down the book when other duties called. Volume One is well worth the time to read. Check it out at the library in Calgary or search your local library for it.

I have purchased the second book, in paperback, and am eager to finish off a current book to get back to see the next volume of Cox’s writing. Hopefully the next volume will stand up to this fine text. I’ll write a second review later and let you know. Hope you’ll read this book and enjoy it too.

Turning the Pages – I’m Working on That, by William Shatner