Features
The Voice
WORTH THE LOSS: UPDATE. AUSU Council Member Nicholas Palamarchuk is winning at losing

On June 11th, 2003 (http://www.ausu.org/voice/search/searchdisplay.php?ART=1623), The Voice ran an article detailing the weight-loss progress of AUSU Council member Nicholas Palamarchuk following gastric bypass surgery. At that time, Nick was just seven weeks post-surgery, and he was beginning the process of learning to eat with his ‘new’ stomach. When we last spoke, he had lost an incredible 68 pounds [down from 438], his medication was already down to half, and he’d worked his way up to eating a half cup of food at a sitting.

Eating was experimental, early after the surgery. Nicholas was not sure what foods his stomach would accept, and said that he would usually try new foods while standing over the sink, just in case. At the time of our first interview, Nick was also beginning the early stages of an exercise routine, which consisted of calf muscle exercises performed while sitting, and gentle, half situps.

At the end of that interview, I promised Nick that I would contact him for a follow up article, about six months after his surgery. Many Voice readers also indicated that they wanted to know more about how Nick was doing. So here we are, six months after Nick underwent one of the most important [and frightening] challenges of his life, and things are looking great!

To be precise, October 18 marked six months since Nick’s vertical banding and gastric ‘y’ bypass surgery. Last week, he reached one of his goals, which was to lose 150 pounds by the time of this six month milestone. Actually, he lost 151, which puts him at 287 pounds and still losing. 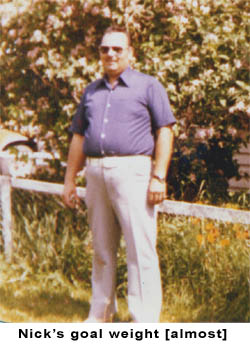 To help him keep progressing, Nick keeps a diary of everything he eats. He further safeguards his health by avoiding tea and coffee (which he says taste like crap anyway) and he has not smoked for six years or drank for two years.

His diet is based around the recommendations of the Canada food guide, and includes the recommended 6 – 8 grain products per day; 6 – 8 vegetables and fruit per day; 2 – 3 milk products per day, and 3 meat and alternatives per day. He also can eat all products that are fat free, ultra low fat, or sugar free, but he says he can’t eat “solid meats without chewing 1/2 hour. A steak, I would not try!” says Nick.
He can tolerate raw fruits and vegetables, however, with the exception of celery, but he’s likely to feel nauseated or “up chuck” if he eats sweets or alcohol, if he overeats or if he eats too fast. But, he can now eat limited amounts of dried fruits, popcorn, ketchup, and sweetened salad dressing. He still avoids alcohol, and carbonated and caffeinated beverages.

The dramatic weight loss has meant that Nick has had to restock his wardrobe too. He’s now wearing pants with a 50 inch waist instead of 63 inches, he’s down to a normal XL shirt rather than a 5 or 6XL, and some of his clothing is now size Large.

Nick’s also finding joy in some activities, which he says ‘normal’ people take for granted. Here are just a few of the common – and not so common – activities that Nick now enjoys:
“¢ Bending over and tieing the shoe strings on my shoes;
“¢ Washing all parts of my body while taking a shower;
“¢ Walking up stairs without it being a major task (or stopping every 2 steps to rest);
“¢ Walking 1 to 2 miles a day;
“¢ Doing 20 -30 minutes of exercise;
“¢ Fitting behind the steering wheel of my car;
“¢ Sitting ‘normally’ in a chair;
“¢ Looking down and seeing my toes;
: and the most recent development:
“¢ Going dancing {started my dancing lessons October 3}. 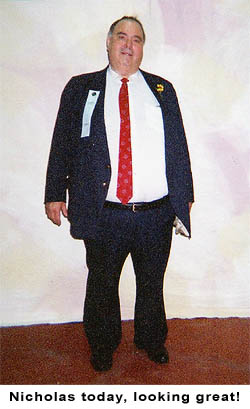 Because of Nicholas’ adherence to a healthy diet and exercise plan, he’s been able to reduce his medication significantly and many of his health indicators are now improving. He has had hypertension, for which he was on four different types of medication at the maximum doses, but now he’s down to 1/4 of what he was taking and will be off medication entirely very soon. His blood pressure is down to 120/64, his cholesterol has been reduced to 3.44, and his resting heart rate is a healthy 68-70 beats per minute.

To remain healthy while losing so much of his body weight, Nick takes a multivitamin and mineral supplement daily, gets a monthly Vitamin B12 injection, and he gets plenty of sleep each night. He admits that he has lost most of his muscle tissue through this process, but he is combating this with an exercise regimen to build the muscle back. Not surprisingly, he says that the “last place to lose is my stomach.”

The biggest drawback of having gastric bypass surgery, according to Nick, is “forgetting to eat. This [is] something even I had a hard time to comprehend at first. I eat 3 meals a day with 3 snacks in between.”

This is a small drawback, however, compared to the benefits that he is only starting to comprehend. Of the changes in his life, Nick says:

Generally, I have become very outgoing, full of fun, happy and I love to wear my new clothing. People have told me that I wear very bright and brilliant colored clothing with a constant happy smile. It is very rewarding to receive compliments, constantly. It helps to live in a community of 520, as everybody keeps an eye on me. My family and friends are my greatest assets.

I must say that I have a completely different life style and am enjoying every moment.

He also revealed that he’s been getting lots more attention from the opposite sex, and that in general he is more approachable because he feels so good about himself. I would debate this last fact, only because Nick has always seemed to be incredibly warm and friendly whenever I have talked to him, but I can also say that he is clearly one very happy man, and his positive outlook is infectious.

It’s difficult to say what the future holds for Nicholas, because he is trying out so many new things as he rids himself of the debilitating weight. This week it’s dancing lessons – next week, who knows? For the immediate future, he plans to complete the few final courses for his Bachelor of Administration – Health Administration degree at AU and then enter the MDE program, which he has a jump on as he is already enrolled in one of the masters level courses.

After witnessing Nick’s motivation and determination through this weight loss process, I have no doubt that he’ll succeed with his educational goals, and whatever else he sets his mind to in the future.

To read the first article with Nicholas, see The Voice, v11 i24, or click this link:
http://www.ausu.org/voice/search/searchdisplay.php?ART=1623

** Please note: Gastric bypass surgery is not right for everyone. Consult your doctor if you would like more information on this, or any weight loss procedure.

SAD DAY FOR AUSU COUNCIL – One member resigns amidst allegations; another is removed under strange circumstances

Worth The Loss – Adjusting to life after Weight Reduction Surgery