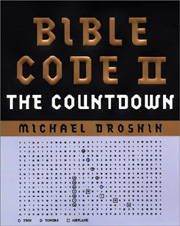 This book, if all points prove true, could easily be the scariest book ever written. Author Michael Drosnin is a hard-core journalist who proclaims he is not religious; therefore the bible should mean nothing to him on a spiritual level, and in fact Drosnin met with Dr. Eli Rips, the Bible Code’s discoverer, as a complete skeptic. Rips, apparently, has discovered a 3000 year-old code hidden within the bible, which can be interpreted through computer software to reveal some ominous predications..

Since becoming convinced of the code’s authenticity, Drosnin has met with the likes of Arafat and Sharon trying to warn them that their courses in history can only lead to the world’s worst war, which the hidden bible code says is atomic war.

Drosnin has found references in the hidden codes of the Christian bible, The Torah (Jewish bible) and other sources. His first book on the subject, The Bible Code, includes a mathematics-loaded article explaining the code. Top mathematicians at Harvard, Yale and Hebrew University have confirmed this code. It is spooky.

Drosnin has sent letters to warn President George W. Bush of the coming problems during his second term in office. That Bush will be elected a second time, therefore, becomes a prediction. Considering his popularity is very low right now, I hope he winds up with a solid comeback to get reelected. Or do I? Do I want to see these frightening incidents happen?

Oddly, there is a sick fascination in human nature. We stop to watch a traffic accident secretly anticipating blood or gore. Most of us will never admit this yet we do not avert our eyes and we often slow traffic for miles by our need to see the sights connected to the smash up. It seems to be the same with this book.

Do you want to know that G.W. Bush never read the letter from this journalist that could have led to a clearer plan to stop war in the Middle East from spreading into a world war? I’m not sure anyone in his or her right mind would. According to Drosnin’s research, the war will begin either by bin Laden or his remaining followers (the book states the war continues “after bin Laden”). It will be a war against the infidels : that means, unfortunately, all of us in North America and the free world.

I read the first book and wasn’t overwhelmed at the predictions. So many of the writings seemed general and didn’t seem to apply to me. The predictions included a monster earthquake for California in 2010, and a couple of big ones in China. Ok, not a nice thought but let’s be honest … kind of expected. I was far more curious after 9/11. Drosnin had claimed to find so many events prior to the actual event’s occurrence, hidden within the code. I wondered if the Twin Towers were mentioned. I mean:just how much history is there in the code?

Drosnin began the second book with September 11, 2001. He lives in New York so his experience was first hand and well written. I appreciated the fact that he admitted he had missed finding this in the code. Since you need to use a computer program to find the events, it made sense. WHY would anyone have put in Twin Towers as a search prior to that fateful day? After the second tower fell, Drosnin ran down to his apartment and fed the event keyword into his computer. It spat out the data. How can this be? How could anything 3000 years old know the events to come for human kind?

Drosnin is convinced that no human being could possibly know the future so accurately. Indeed, even the great Nostradamus had to hide information in quatrains and still had typos (for instance Hister not Hitler). I find myself asking the same questions that Drosnin does.

My husband is fascinated with this second book, far more than the first. Now that 9/11 has taken place there seems to be more possibility for these catastrophic events to truly happen – unfortunately.

The atomic war the book predicts will not be over the need for land or resources (like oil) but against those that the Arab extremists don’t agree with:which seems to be virtually everybody.

Yet, before you become deeply depressed, Drosnin is a believer in mankind’s future. He asserts that this code was placed here so we could find it and change the world’s events. He insists the likelihood is that we can change these events if we work toward it. Drosnin has traveled the world to meet with world leaders and shown them as much code as they need to try to make events change. He hopes to change these political actions over time to stop the upcoming catastrophes.

Since the original Bible Code book speaks of events in 2010 and beyond, I think we can guess the world will not completely end in 2006.

Depending on how much work we, as people, do to influence our politicians and fellow men about the need for peace, we may even be able to avert this calamity all together. We may have to stop gaping at the gore in traffic accidents that come along, though.

My review of this book includes a wish for peace to all – and those of all faiths.

The Secret to Happiness