On September 17, 2003 the Voice published an article written by me entitled “Conventional Vis-Ã?-Vis Distance University Education (http://www.ausu.org/voice/archives/articledisplay.php?ART=2015).” In it, I explored some of the differences between on-campus, class-based university education and distance university education from my personal student-perspective. I’d like to augment that article with some further insight procured after nearly two months studying in the former mode.

There is an aspect to conventional university studies that I didn’t realize I was missing while studying strictly via distance. The University of Saskatchewan, and particularly its College of Law, goes to great lengths to provide its students and faculty with some of Canada’s most prestigious speakers and special events. Every Monday the College arranges for guest speakers to lecture on various subjects of their particular expertise, and I have yet to miss one of them.

On September 29, 2003 The Honourable Raynell Andreychuk (http://www.parl.gc.ca/information/about/people/key/bio.asp?lang=E&query=299&s=F), Canadian Senator, was the College of Law’s Guest Speaker. The Senator’s lecture was based on the Report of the Standing Senate Committee on Human Rights”?she sat as Chair of said committee. The report is entitled “Promises to Keep: Implementing Canada’s Human Rights Obligations” and it can be found at (http://www.parl.gc.ca/37/1/parlbus/commbus/senate/Com-e/huma-e/rep-e/rep02dec01-e.htm). Senator Andreychuk spoke about Canada’s human rights record nationally and internationally and pointed out that while gains have been made, Canada has a poor record of implementing the human rights legislation domestically that it agrees to (and imposes on others) internationally. The Senator is an alumna of the USask College of Law, class of 1967.

On October 6, 2003 UBC Professor of Law Susan B. Boyd (http://www.law.ubc.ca/faculty/Boyd/) was the Guest Speaker. Professor Boyd is Chair in Feminist Legal Studies & Director of the Centre for Feminist Legal Studies. The professor’s lecture was based on her recently published book Child Custody, Law, and Women’s Work (Toronto: Oxford University Press, 2003; ISBN: 0195409183). Professor Boyd spoke about the historical development of Canada’s divorce and child-custody laws and the impending changes to same under federal Bill C-22 (http://www.parl.gc.ca/37/2/parlbus/chambus/house/bills/government/C-22/C-22_1/90206eE.html).

On October 15, 2003 Rosemary Owen (http://www.law.adelaide.edu.au/staff/rowens.html), Senior Lecturer of the University of Adelaide Law School, Australia was the Guest Speaker. Her lecture was entitled “Taking Leave: Work and Family in Australian Law and Family” and it was based on the evolution of Australia’s labour/employment law in relation to female workers and leaves required for birthing and raising children. Australia lags far behind Canada in this area of law, women workers having no access to government-paid maternity leave. Consequently, work and family are in conflict to a much higher degree than Canadians are used to. I found Ms. Owen’s lecture to be particularly interesting to me personally, as it allowed me to compare Australia’s legal system of industrial relations to Canada’s”?a polarized comparison indeed.

Most recently, on October 20, 2003 Desmond Manderson (http://www.law.mcgill.ca/faculty/bio_display-en.htm?bio_id=178&state=Print_List), Professor of Law McGill University and Canada Research Chair in Law and Discourse, was the Guest Speaker. Professor Manderson examined the sources and nascence of civilization and law through the unlikely vehicle of children’s literature. Utilizing the children’s classic book Where The Wild Things Are by Maurice Sendak as his focus, Professor Manderson drew on mythical, cultural, and legal-philosophical literature to synthesize the topic. His thesis is that children’s literature allows children and their parents to confront complicated questions of responsibility and obedience. Through the tutelage of children’s books, children learn of societal, social and familial rules”?law and civilization.

When I worked for the railway (not so long ago), I often found myself driving my truck in the middle of the night to some Godforsaken terminal that I’d been ordered to. I’d tune into CBC radio and listen to Ideas, on which I would often hear lectures broadcast from different universities or other venues across the country. I’d imagine myself in the audience and wonder what it would be like to partake of such an intellectually stimulating experience in real life. Now I find myself surrounded by brilliant minds and I plan to take advantage of their availability at every opportunity. I encourage my AU peers to seek out lectures given by guest speakers at a local venue near your residence (if possible). Most universities will advertise when guests will be speaking and they are often open to the public without charge. Pick someone who is speaking on a topic that you are interested in, not necessarily one which you are studying, and go with a mind open to new ideas and prepared for stimulation and enjoyment:

Wayne E. Benedict has a varied career history and strong links to the Canadian labour movement. He is working part-time toward his Bachelor of Human Resources and Labour Relations at Athabasca University. He is a fulltime first-year student of the University of Saskatchewan College of Law. For a more detailed writer bio, see The Voice writers’ feature page under ‘About The Voice’. If you would like to send article-feedback to Wayne, he can be reached at wayneben@sasktel.net 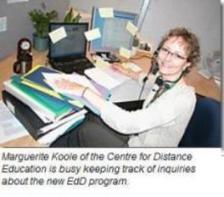 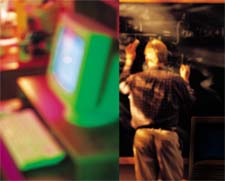