Articles
The Voice
From My Perspective – Privacy and the Internet

Last week I received a phone call that made me stop and think about what I’ve been writing here for The Voice. Although I’ve tried to write on a wide range of topics that I think will be of interest to student readers, many of my articles tend to be about things happening within my own life. This is not because I’m particularly egotistic, nor do I think my life is anything special that merits being publicized. I write about myself and my family because I hope it may be of inspiration and help to other AU students to realize that I’m just like them – bearing a heavy load of work and responsibility, taking care of home and children, fighting with adversity and unexpected roadblocks, feeling discouraged at times – yet managing to achieve my goals and dreams in spite of it all.

From what student feedback I’ve received, it seems that I’ve succeeded in providing this encouragement to many. I also have received feedback expressing appreciation for other topics I’ve addressed, such as articles on different educational issues. The university has even used one of my articles (with my permission) to assist students in explaining the new grading system.

On several occasions, however, I’ve received feedback that surprised me. Earlier this year, my daughter’s professor wrote to correct a couple of minor errors I had made in reporting on a discussion he and I had during the undergraduate chemistry conference we were at in May. He complimented my writing style, but corrected me in two points – he had received his PhD in the Soviet Union rather than Canada (I misunderstood him on this one); and his interest was quantum/theoretical chemistry rather than analytical (not that I have any clue what the difference is!!) I felt bad because I’m usually meticulous in ensuring the accuracy of my writing. His comments, though, reminded me that many people are reading The Voice who are not Athabasca University Students.

This was not the first time I’d realized this, of course. I had the editor of another student newspaper ask me about my daughter’s Popstar experience that I had written about. An old friend and I rediscovered each other through The Voice. My youngest daughter advised me that her friend’s mother always reads my articles. In fact, my daughters have all been a bit uncomfortable with me making mention of them in what I write, since they prefer to keep things in our lives private. I’m conscious of this, and try to be careful in what I say so as not to violate their privacy unduly.

But this particular phone call made me realize that although I write my articles for AU students, there are a whole other group of potential Voice readers out there. It also gave me a wake-up call regarding the general lack of privacy of anything published on the Internet. The call was from a city councillor in British Columbia. He had been doing some research on the Internet in order to assist his constituency with a problem they are facing, and one of my articles came to his attention. His community has a situation similar to the one mine had when the adult video store opened at the end of my street, and he wondered whether I might be able to steer him towards any information about what had eventually occurred here. I provided him with all the information I had and wished him the best of luck. After I hung up the phone, though, I sat there for a while musing about the improbability of an article published in a small university newspaper ever reaching the attention of a city councillor in another province before the advent of the Internet.

My musing went even further, though, into the whole notion of privacy and the Internet. Those of us who write for The Voice may not always be thinking of the fact that our articles are being published for a potentially world-wide audience – but they are – and we should be aware of that in everything we reveal about ourselves.

It’s not only The Voice, of course. Increasingly our personal lives are subject to being published, bit by bit, on the Internet. If you doubt that, try doing a “Google search” on yourself or a close family member. You might be surprised at what turns up – I know I was. If you’ve ever put your resume on certain online job sites, it can turn up on a search engine. If you’ve ever written a letter to the editor, you will appear on the Internet if that newspaper happens to publish it in their online version. Certain lists of student awards are published on the Internet. Membership in organizations, both professional and recreational, are published. Many government documents are also published on the Internet. I was shocked and concerned to discover that court documents from tax court proceedings I had been involved in some years ago were published online in their entirety. When I wrote the government to protest, the response was that these are considered public documents and the government has the right to publish them wherever they see fit – including the Internet.

Even when these events are no longer current, they can remain accessible through the caching option on search engines. If you really have the time and energy, you could get a fairly comprehensive picture of what another person has been involved in, simply by surfing the search engines. If you have a personal web page, you are putting yourself out there for the world to read about. Comments made on discussion forums can also create the Internet version of a paper trail. This could provide a great deal of information when combined. Not only are you making your name and location fairly obvious, your discussion forum habits give away a great deal about who you are. If you belong to a local organization, this pinpoints your city. If you post on a forum with a particular medical or social topic, this can indicate your interests, particularly if you also belong to an association that is also relevant. For example, if I posted regularly on a forum about epilepsy, was a member of the Edmonton Epilepsy Association, and if I had written a letter to the Journal about lack of health care funding for children’s mental health – you could easily draw the conclusion that I might have a child with epilepsy, when in reality I’m simply a student with a keen interest in the topic.

The incomplete and one-sided nature of this information can lead to harmful misconceptions. For example, an acquaintance had been caught downloading teen porn in the workplace. Out of curiosity, I “Googled” him, discovering that he had been part of a child custody battle in which his ex-wife accused him of sexually abusing their daughter. He had become involved in a public campaign on behalf of himself and other men in this situation, and this ended up on the Internet. Needless to say, it would be easy for me to reach certain conclusions about this man due to this combination of information – and they might not be correct.

I’m not sure there is a solution to the problem. Already most of us have plenty of Internet baggage that will never go away. Certainly its prudent to be careful about what kinds of things we deliberately put on the Internet, and I will continue to be even more careful about what I write in The Voice. But there is not much we can do about external organizations and bureaucracies that choose to publish our names and other personal information on the Internet.

A few days ago I read about a family historian who has been extensively researching her family. She has found that the so-called “black sheep” of the family are a wealth of information for research, whereas those who keep a low profile and do little of note are far more difficult to research, since they never do anything newsworthy. This gave me a little bit of solace. At least, somewhere down the road, my great-grandchildren will be able to discover plenty about me, whether it is good or bad! 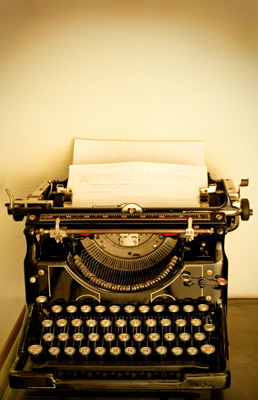 Why I Write for The Voice (And You Should, Too)

From My Perspective – Life at the Top – AUSU Council President