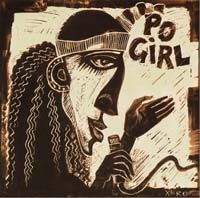 Mix with some strong soul roots and simmer slowly over a steady heat.
Sprinkle in some harmonica, clarinet and a bit of mandolin for seasoning.

The result is Po’Girl. This tasty Canadian dish works best for taking out on the porch or steps or for when you want to remember the hot, lazy, dog-days of summer.

Easy going down. If you like sultry vocals over jazz or blues, with a bit of the backwoods flavour, you’ll find Po’Girl is certainly a treat. Unfortunately, none of it will stick with you for long, and probably the biggest fault of this dish is that while you enjoy it at the time, you tend to forget it shortly after.

Losing the food analogy, Po’Girl is actually a group composed of Trish Klein (perhaps better known as a member of the Be Good Tanyas, an alternative-folk trio with a nostalgic sound) and Allison Russell (from the celtic folk band, Fear of Drinking). These two come together with a mix of folk, blues, jazz, and soul that works in this self-titled album.

While none of the tracks blend all of these together at once (thank goodness!) the influences can be heard under each of their tunes and arrangements, though each has its special focus. The first track, “gone in pawn”, for instance, is a definite blues track with a bit of the hillbilly twang, while at the other end of the scale, the hidden tune at the end of the track “lullabye” (after a good four minutes of silence following the first section – I hate tracks that do that) is a slow jazz tune like might have been heard in a sexy nightclub in Chicago many decades ago.

The second track, “bad luck baby”, is an great piece of soft urban blues, somewhat reminiscent of Alicia Keys but with all of the artifice removed. Instead of layer upon layer of studio production, Po’Girl presents this piece in its unadulterated beauty. From there we move into the “city song”, which is about as close to a straight folk song that you might find on this album. It also happens to be one of the best pieces of harmonizing on the album.

Speaking of vocal harmonies, one drawback of the album is that there simply aren’t enough of them. For some reason, they seem to reserve it mostly for within a chorus or for short emphasis here and there throughout the verses. This is really a drawback, as the two voices produce a wonderful sound together. Enough to make you wish that you could hear more of it.

Not willing to be content with blues, jazz, soul, and folk, Po’Girl also throws in some banjo and Celtic influences, most clearly defined in the song “Shameless” where the banjo and woodwinds are particularly evident. You would think that the introduction of this tune would be jarring when compared to the rest of the album, but the production is professional and smooth enough that it is not the jarring experience you’d expect on first hearing about it.

In fact, the production quality throughout is quite good if you like your music smooth. Don’t look for any hard edges or raw strings with Po’Girl, because you simply won’t find it. Neither the music nor the production leaves any of it in. The sole exception is the song “malaise days”, where a tiny bit of the edge is left on the plucking of the strings, and even an off-key note or two shows up. Unfortunately, it’s almost too obvious that these little remnants are contrived simply for the effect of the song – which work to rob it of most of the effect.

The bottom line? If you like jazz or enjoy a bit of Louisiana style Blues, you’ll probably enjoy Po’Girl. If you want to feel like you’re sitting on the edge of the creek near the end of summer, you’ll find this album is a good start. On the other hand, if you’re looking for music that will have you humming or your toes tapping well after the album is ended, you might want to keep looking.

For more info and some samples, you can also check out their website at http://www.pogirl.net/.

In Conversation with Michael Gauthier, Part I