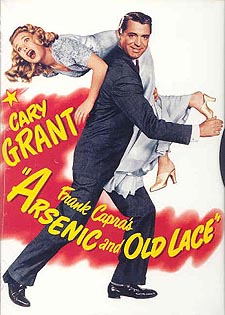 This is one of those brilliant classic black and white films that, thankfully, Hollywood hasn’t yet redone. The story centers around the likeable Cary Grant (as Mortimer), who has come home to see his favourite aunts and found they are having a quiet funeral for a gentleman who was renting one of the rooms in their house. The poor fellow died and they have to have a Christian ceremony to say goodbye properly. Well certainly anyone could understand that-until of course we find out that the lovely old aunts have been murdering these men (13 they think, although they argue on the number) with their tainted elderberry wine. These men are lonely travelers with no family, so the women decide they can’t go on suffering like they are. They mean well but: it’s not quite the right way to handle the situation”?especially when Mortimer finds a dead body in the window box.

This film includes Hollywood favourite Jack Carson, a Manitoba born actor who was so hunky and talented that everyone loved him. I admit I really enjoyed much of the late actor’s work.

Josephine Hull plays one of the ditsy aunts to absolute perfection! She is one of those actors with an unforgettable face but a name you don’t usually remember… sort of an earlier version of “Janice” on Friends. Can you tell me the actress’ name? I thought not, but you remember her face and laugh!

Another face you’ll recognize right off is Hollywood scary guy, Peter Lorre. A gentle soul in real life, his pop-eyes and oozing voice made him a favourite to be cast in the role of any character who was minorly or majorly evil.

Cary’s Mortimer has just eloped with his perfect lady, played by Priscilla Lane. He rushes home to tell his family (the aunts and brother) and she needs to tell her family too. Prior to running off for their honeymoon Cary finds a few problems at the house might need a bit of fixing.

Mortimer’s brother thinks he’s Teddy Roosevelt (a US President) and constantly has to charge the enemy up and down the staircase with a bugle. Naturally! Teddy believes the goings on are from yellow fever and the basement is the :well: the Panama Canal. Must be fun being crazy!

Well, if you think there are enough crazy characters and that this is a tough to follow plot, then you haven’t seen the film. There is also Mortimer’s older brother, played by Raymond Massey, who has just been released from prison. He has to deal with the man he’s murdered and work with his plastic surgeon played by Peter Lorre. So now the train to Niagara Falls is looking like a dream for poor Cary”?ehhh Mortimer! Oh, now I’m getting confused!

Mortimer decides to blame Teddy for the murders (since everyone knows he’s nuts) and send him off to live at a mental sanitarium named Happydale, citing “Insanity runs in my family – it practically gallops!”

The aunts won’t allow anyone to blame their dear Teddy, so since Mortimer thinks it’s best -they decide to deal with the law themselves.

But before all of this works out there are too many plot twists to name! I’d rather just tell you to watch this loveable old film and warn you there are too many belly laughs to warrant your throwing popcorn down your throat merrily! Director Frank Capra keeps the laughs coming in a steady stream!

The pacing is nearly frantic, giving no one a chance to relax. Nowadays no one does films like this. We’re too involved in character studies, sex, and blowing huge objects up! This film will remain a classic:and should.

Arsenic and Old Lace is just shy of an absolute scream! I’d love a copy of this for my collection:and no doubt you would too! This film is not for those who have just lost a loved one. It has “twisted” and “black” humour. Be aware.

For those of you who are ready and willing to watch this crazy laugh fest I really hope you enjoy it.

Check out more of Hollywood’s memorable actors at the site below:
http://www.what-a-character.com/cgi-bin/main.cgi?indexby=film&title=Arsenic%20and%20Old%20Lace

Grab some great pictures and information on the film off this site:
http://crazy4cinema.com/Review/FilmsA/f_arsenic.html

From My Perspective – Love, Second Time Around

An Encounter With A Mass Murderer – Part 1