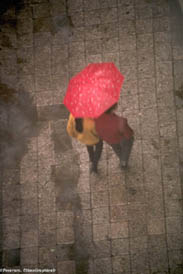 It’s Saturday afternoon and we’re sitting in our living room eating left-over noodles from leaky paper cartons and watching a videocassette of Charlie Chaplin’s The Gold Rush. It’s one of those November days when the rain comes horizontally at the windows and fills the house with the type of blue-green light that always puts me in mind of empty churches and Sherlock Holmes on the Yorkshire moors and grainy footage of Jacques Cousteau beneath the surface of the North Sea. My wife is curled up underneath a blanket while our six-year-old daughter divides her attention between cutting out crepe-paper bats and watching the funny-moustached man eating his shoelaces like spaghetti. The kettle is whistling on the stove and there’s a chunk of cedar wood burning in the fireplace. Oh yeah.
This is my kind of weather. Other people long for balmy summer evenings or crisp fall days. I pray for leaden skies and torrential downpours. Perhaps, as my wife suggests, it betrays a certain morbidity in my cast of mind, but I have always been a sucker for stories that begin “It was a dark and stormy night,” have always relished the bleak autumnal procession of days that pass across the Vancouver calendar like black-hooded medieval monks.

In my idle hours I have randomly and unscientifically identified fifty or sixty different types of Vancouver rainfall. There is, for example, Don Ho Rain – those tiny luminous bubbles that dance on capricious air currents, never seeming to land. Bladerunner Rain occurs in the early hours of the morning and leaves the downtown streets with a futuristic, neon-reflecting glaze. Collective Unconscious Rain cascades for days on end, inspiring archetypal visions of apocalyptic floods. Ingmar Bergman Rain brings on feelings of existentialist angst. Strata Council Assessment Rain, perhaps the most common Vancouver variety, is capable of turning wood frame condos into soggy cardboard boxes and transforming drywall into something roughly the texture of milk-soaked arrowroot biscuits. Mingus Rain plays rhythmically complex post-bop compositions on middle-of-the-night corrugated tin roofs. Humiliation Rain selectively drenches the area from crotch to kneecaps. B-Movie Rain falls outside isolated cabins when everyone else is asleep. Well Spent Afternoon Rain provides an excuse to phone in sick and do something really productive, like play snakes and ladders or watch televised ballroom dancing. I could go on, but perhaps you get the picture.

If I ever fall into a fabulous inheritance, I intend to open a rain museum – room after room of bronze-age rain barrels and primitive cloud chambers. A whole floor, of course, would be dedicated to a collection of the world’s rarest umbrellas: the early Chinese prototype, made from treated rice paper, discovered in a subterranean vault of the Forbidden City’s Imperial Palace; Louis XIV’s jewel-encrusted parapluie; the seventeenth century Japanese version made from the silk of nocturnal worms that spin their thread only during the full and dark of the moon (It is said that this particular umbrella will instantly dissolve if used in a rainstorm by any but the most pure of heart.).

Half the enjoyment of a good rainfall is finding the perfect place to experience it. My idea of an afternoon lived large, for instance, is one spent walking along the Stanley Park seawall while raw gusts of drenched easterly winds hurl themselves like liquid rottweilers at the throat. There’s also a great dim sum place on Pender Street where they cook with woks the size of upside down umbrellas, and the steam from dishes of sticky rice and Peking duck conspires with the exterior weather to create condensation so thick that passersby in the outside world resemble nothing so much as great carp drifting beneath the surface of a murky ornamental pond.

There are certain provisions, too, that help maximize the enjoyment of lightless fall days. Thick Victorian novels and sombre chamber music recordings create a fine ambience. Burning incense and candles and swilling cups of espresso can’t hurt. By all means put extra garlic heads on the shopping list to ward off vampires and colds. Lamb stews or hearty chowders washed down with pinot noirs or thick creamy porter ales are sustenance of choice around our house. Whatever your personal taste, though, it’s the sense of seasonal ritual that counts. Like it or not, autumn is here, and, like most things, enjoying it is largely a state of mind. Bring it on, I say, bring it on.

From Where I Sit – Not That Good