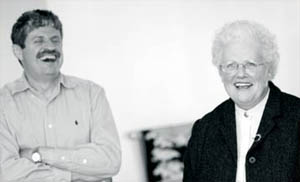 When he contemplates his 25 years working with Athabasca University, two things bring Alvin Finkel particular pride. One is the Craig Cunningham Award for Teaching Excellence he took home in 1999.

The other is the union work he’s done in that time that has “prevented a reasonable number of people being declared redundant.”

“My career at AU has been defined by an effort, largely successful I think, to balance teaching, research and an active role within the university community, including that of a union militant,” Finkel explains. “Much of my research is in the broad area of social justice, and I try to bring something of that orientation to my dealings with fellow staff and with students.”

AU family members gathered at University House September 17 to celebrate Finkel’s 25th anniversary with the University, and his reputation as an academic and Canadian history authority. According to Finkel, it was more than a pleasant affair.

“I spent the day basking in all the compliments people gave me … about my achievements,” he said. “Actually, I’ve always found people at AU extremely encouraging of my efforts and more than forgiving when I’m fairly strident as I press my perspectives.”

Finkel notes that if he had relied on his then-knowledge of Athabasca University, he might not have applied for the Canadian History position that was advertised in 1978.

“Everything I heard about it came from professors at the U of A who were hostile to the idea of a ‘correspondence’ university,” he said, noting he decided to take that leap based partly on reassurances from his friend and colleague Natalie Sharpe. He also found himself intrigued by the concept of writing courses.

“I had a background in journalism as well as university teaching,” Finkel said. “So, actually, the idea of writing courses very much appealed to me as something that I could probably do a whole lot better than people with academic training.

“Graduate school often teaches people to write in pretentious and jargon-filled language,” he continued. “I knew the game, but I had a different kind of training that made it easy and enjoyable for me to think and write in plain English.”

Finkel adds he’s looking forward to more of the same in his next 25 years at AU.

“I want to continue to write books, articles, and courses, to serve on editorial boards, to do union work, and to serve on AU committees,” he said. “I often think I should slow down in some areas so as to allow my work in other areas to be more relaxing. But I’m not sure what work to divest myself of, since I enjoy almost all of it.”

Like many people, AU philosophy tutor Jill Hunter was deeply affected by the news of the death of Lori Oddson, the director of Collaboration & Learning Services. She and Lori had been friendly, and Jill was deeply impressed by, among other things, Lori’s capacity for gratitude.

When presented with the opportunity to run the Royal Victoria Marathon on October 12 in support of the Cancer Society and the Lung and Asthma Association, Jill felt it was time for her to take opportunities as they come. She had never run a marathon before, but she couldn’t help but feel that life is already too short to miss this.

“It seemed appropriate the marathon is on Thanksgiving weekend,” Jill noted. “in a way the run is sort of in memory of Lori. I’m just thankful I can run the marathon.”

Fellow AU staff [had] an opportunity to remember Lori Oddson, as well, Wednesday, October 8, at 11:30 a.m. when a tree [was] planted in her honour at AU Central. There [was] also be an opportunity to speak for those who wished to do so.

Separate events are being planned to remember other AU family members who have died in the last year. A tree will be planted at Tim Byrne Centre in honour of Lois Haub, and a piece of art and a plaque will be hung at Edmonton Learning Centre to remember tutor Dave DasGupta, who died in July. Details for those events will be announced soon.

“It (can be) very hard on people,” Martin noted. “All of these deaths affect almost everybody. Everyone knew one or the other of them.”

Every minute of every day last month, an average of almost 5 people logged onto AU’s Web site. Here are some other AU Web statistics to chew on … 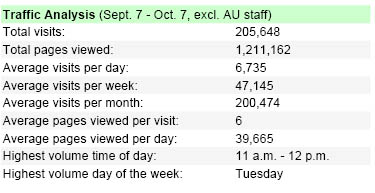