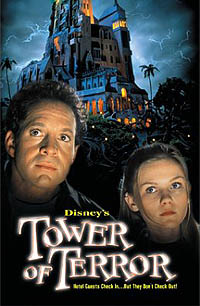 Well, Hallowe’en was coming up soon when this flick aired on the Family Channel, so, the TV world decided to look up “scary” in the film purchase books. This film is a harmless Disney flick, but it’s entertaining and well done. I’d consider it ok for some of the older children out there as long as ghosts don’t scare them.

The story begins with the demise of five people in an elevator in the Hollywood Tower Hotel in 1939. This is shown in glorious color and the character reactions are shown in a quick, well-shot scene or two. A small child star, Sally Shine, is at the center of it all. Her harsh and uptight looking nanny is with her in the elevator. In with them are the elevator operator and a fancy dressed young couple. All are destined for the top floor and are silent as they rise. Outside the hotel is a loud and scary thunderstorm. It crashes and cracks and the five people suddenly disappear shortly after 8 p.m. Where they went and what happened to them has been a mystery for 60 years, and the hotel has been deserted since then.

Still sexy, Steve Guttenberg, plays Buzzy Crocker, a flunked out journalist who used to have what it takes to be a hard-boiled reporter. Lately, he’s only been able to sell stories he makes up to the world of tabloids. Those tabloid stories are enough to pay the bills but it’s not his real choice for work. Enter Steve’s biggest and most worshipping fan, an older lady who gushes about his appreciation of the occult and the stories he unearths. She tells him she was the child of the owners of the hotel at the time of the 1939 accident. She has been waiting all these years for someone to solve this case but she kept quiet because “no one would believe me.” She convinces Buzzy how important this would be for his career and he finally starts to see how he might use this story to put himself back on top.

A still very young Kirsten Dunst plays Buzzy’s neice, Anna. More or less roped into trying to solve the ghostly situation rather than really wanting to be there in a ghostly old hotel, she grudgingly goes along with uncle Buzzy.

Buzzy goes to the hotel to have a look. There he meets Dewey, played by Mike McDonald. A hilarious and gifted actor, Mike often guest-starred on Whose Line Is It Anyway. Here he plays a flunked out car mechanic and the grandson of the elevator operator who disappeared. Since Dewey can’t fix a car worth beans he makes “his living” by touring people around the hotel at Hallowe’en: but he won’t go inside.

Buzzy however senses a chance to get back on the front pages so inside he goes. Inside the once luxurious old hotel are cobweb-covered Art Deco pieces, and of course a few ghosts. It is the ghosts of the elevator incident that Buzzy winds up seeing with his very own disbelieving eyes. This convinces him to research the story further.

When Buzzy tries to interest a former newspaper boss in the story, she does some investigating herself. Following up on the name of his source, she visits the sanitarium the woman lives in and discovers that Buzzy’s source is the sister of the little child star who died in the elevator:and she HATES her sister. Meanwhile Buzzy still believes the old lady. He recovers the book the old lady told him was hidden in the hotel and they all start to study its complicated spells and dark messages.

Buzzy hires “an actress” to play the nanny in the elevator for a photo to sell for some more quick bread and butter. A young and pretty gal shows up but doesn’t look the part. That’s ok with Buzzy who thinks she’s gorgeous. He gives her the part and merrily snaps pictures of her. Later we find out, in a delightful twist, who she really is. I won’t spoil it for you.

Eventually the newspaper boss and Buzzy team up with Anna and Dewey to solve the whole problem. At first Dewey won’t go into the hotel but when Dewey’s grandfather asks Buzzy to pass on a message of needing his grandson’s help, it changes his mind.

The gang meet up with the original lost souls and we begin a very “who dunnit” grilling session. Characters reveal one another’s little secrets and confessions are made. Eventually the young child star, Sally, asks them to change their fate by fixing the elevator so they can get to the top floor.

No one knows how to fix the elevator:except Dewey is a mechanic. After a quick grandfather to grandson plea, Dewey works on the ancient equipment and gets it going.

Little does anyone know that in the basement the “fan” of Buzzy’s is busy conjuring up her spell to kill her sister all over again!

Does it work? Of course not! This is Disney! But the finale is well done and the film is taut and well made”?as most Disney productions are. Have a good bit of fun and see this film, but don’t expect too many spooky happenings. It’s friendly for most youngsters.