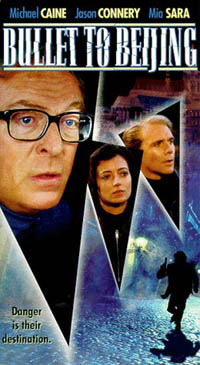 In most of Michael Caine’s films he plays a loud Cockney – an irritating but charming fellow – but not so with this spy thriller with more twists and turns than a mountain road!

The film begins by revealing some of the traits of Caine’s character, Harry Palmer. He’s a healthy, sexually interested Brit who happens to see his soon-to-be ex-boss’ secretary in the paper in the arms of many men. She’s a hotty, no doubt about that:and frankly it’s a lovely dig at British politics. In fact much of this film is a lovely dig at political nonsense. You don’t have to be up on what’s what with all the governments to get the joke, but it does help.

Harry Palmer is soon laid off from his MI-5 job (British Intelligence”?old name and technically number) and after giving his boss a good ear full he walks out.

Pretty darn quick Harry is phoned by some folks who state that they have seen that he’s no longer employed announced in the newspaper. They arrange a meeting and as soon as that’s done he’s whisked off to St. Petersburg, Russia. No sooner does he arrive by car than he’s being chased by the bad guys! So we get a birds’ eye view of the city and after a quick fly past he’s popped onto a boat to get away from them.

One host is British/Russian while the other is American/Russian. Well, soon we can’t tell who is working for whom and what the hell their jobs are. Harry starts calling in some favors in Russia after being hired to find a duo combination genetic poison that can kill a million people with one drop. The two parts are harmless when separate but when together are deadly. Its code name is Red Death.

One of the people Harry calls in some help from has a sweet little grandson and Harry manages to get the kid and his grandpa safely away from another shoot-em-up incident. He’s therefore completely accepting when the child comes to his hotel room to deliver a traditional folk craft of Matryoshkas.

You’ve probably seen this adorable wooden gift of Russian women in traditional dress. Every time you unscrew the wood it reveals another wooden carved woman in a smaller size. The toy gets smaller and smaller and:well you get the idea.

With the gift is a note from the grandpa telling Harry to take “the Bullet to Beijing.” This later began to make my husband a bit buggy because he recognized that the train Harry was on wasn’t a bullet train, but eventually the mystery of the request is figured out which made my hubby much happier.

Is the ex-CIA agent that Harry runs into on the train really “ex” or has he suddenly turned to working for the bad guys? Harry keeps bumping into ex-agents. Some ex-KGB, ex-CIA and ex-MI-5 agents are suddenly working for everyone else. Or are they? Everyone starts to get suspicious of everyone else.

Meanwhile the train trip is moving along nicely until Harry spots a guy who tried to shoot him on a platform. After quickly plopping the guy off the train they investigate the contents of a trunk heading for the North Korean Embassy in China– except that gets them dumped off the train.

How fast can they get to a nearby village and find a phone? Well, pretty quick:and they find a plane to get them where they’re going. And of course it’s NOT going where they want to be: because no instruments work on the plane! By now I’m getting frustrated for poor Harry. The fact that reports of so many unworking objects have come out of poorer countries like Russia actually sustains the plot. The idea wouldn’t work in, say, Europe or North America.

Soon Harry has landed “somewhere near Siberia” and the group goes off in a couples’ banged up car to drive the necessary miles to the nearby train station. Of course that means that another set of bad guys have to figure out where they are and start to chase them. Harry cracks, “I’m too old for this!” as he catches up to the train seconds before it disappears from the end of the platform and gets back on the case.

His old buddy the ex-CIA operative turns out to be a DEA agent. Let’s hope you know all your government initials!! Harry of course has even more to do before he manages to get the mystery solved and get away from more flying bullets, but there is no way in hell I’m going to ruin a lovely twist of an ending for you! Be sure to catch this film when you’re in a spy thriller mood. It plays on local TV stations often enough and is a great romp.

Flicks & Folios – Film Review: Journey to the Far Side of the Sun