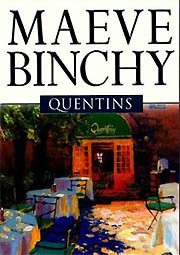 Maeve Binchy is a new author for me. I’ve been drawn by her lushly-colored covers in my local bookstore, but never looked inside one until now.

In one way Quentins is a collection of stories – almost vignettes of people and their lives and how they relate to the restaurant of the same name. This, thankfully, does not take up the bulk of the book’s content.

Some of the characters, like Ella, are more memorable than others. Ella enters on page one as the only child of the Bradys. They adore her and try to give her everything though they have little money.

Right off the bat we’re aware that the Brady’s child is the light of their life. As a matter of fact, they have almost no relationship other than that with their child.

Mama mia! I’m floored by the character creations that Maeve can put onto a page! She shows so many angles of the primary characters and avoids stereotypes. This is very important as her books take place in her native Ireland.

How many times have we heard about the bullies? The IRA? A drunken Irishman? These stereotypes are not present in her books, but interestingly the topic pops up through an American man’s character whose father’s people are from Dublin. His Irish family isn’t what Derry King, a character introduced later in the book, is particularly proud of. This is because Derry sees these people as glorifying their pain in their music. He pictures drunks and fighters. But when Derry finally visits the country and sees the charming people and the lack of drunks and violence he slowly falls in love with the folks around him and finally with one particular character. Those of you familiar with my writing know I won’t spoil the ending!

I found myself annoyed at Ella’s long relationship and the problems she had tearing herself away from the troublesome man. Her life is more or less ruined by Don Richardson, a married man who appears to be very upfront about his dead relationship. That is until his deception becomes painfully clear. Unfortunately this takes forever to get through Ella’s oh-so-in-love thick skull.

Ella, in my eyes, was a doormat for too long. Worse, so many people were not helpful to her becoming wise to him and worst of all she wouldn’t have listened if they were. Of course the character is meant to be this way and Maeve brilliantly pulled me this way and that to coax me to feel exactly as she wanted. Darn her!

I have had one problem with Quentins: I found it stuffed with characters. It isn’t that I couldn’t keep them all straight — lord knows I’ve had that problem before. It is simply that there are so many people to care about: so many people to wonder about the outcome of. The restaurant is the hub where the characters come together. The owner is rarely seen, but the narrative centers around those who visit Quentins, work in it, and reveal their lives to the other diners.

As an interesting footnote, the lack of proper punctuation for the restaurant’s name is also addressed. It is a charmingly observant touch for those of us who are fanatics on proper rules of English.

Another character we need to get straight is Ella’s complex love — well love number one — Don Richardson. He is a man we somehow want to trust because he appears to be so forthright. What is it about forthright that sells us on good intentions? Whatever it is, Maeve Binchy uses it well and made me a sucker.

Don is with Ella for so long. He is a verbal craftsman – calling her his “angel Ella.” It sounds so appealing, mushy but cherishing, but he is slowly revealed as a cad. Or is he?

Bit by bit I found myself sucked into Ella’s irrational arguments and then angrily annoyed at myself for recognizing this twisted male charm that robs Ella of so many years of genuine love.

Her hero, rest assured, is dealt with but again, I refuse to spoil the ending.

I recommend if you like long and complex stories with highly detailed characters told by a true pro that you consider the books of Maeve Binchy.

As for myself, I must be incredibly honest. I’d rather not read another book where the heroine is so slickly duped again. I have a hard time with the anger that pulses up in me with that type of character. But you, go ahead. Maeve writes well and her books are, delightfully, not common writing.