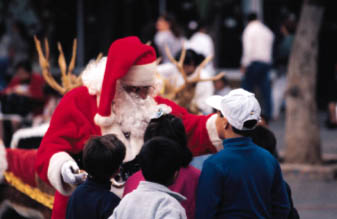 Christmas must be in the air, because we’re sitting in the food court of the hermetically sealed biosphere/shopping mall and drinking four-dollar eggnog lattes from the evil Starbuckian Empire. The overhead sound system is playing a gloopy-sounding, new-agey version of the Wexford Carol arranged for synthesized strings and harp. The joke shop next door is selling painted ceramic reindeer poop to put under the Christmas tree. Through the window we can see parents balancing shopping bags and babies. A mother is grabbing her child by the arm while swivelling her head to look for potential witnesses to the righteous tongue-lashing she’s about to deliver.

I know it sounds like I’m a dyed-in-the-wool grinch, but the truth is I really do love the Yuletide season. It’s just that it seems to get harder and harder for me to understand why. As most everybody over the age of eight or nine knows, Christmas has largely been reduced to a plastic dollar-store snow globe, filled with toxic liquid and glitter, manufactured by child labour in a third world factory. If you happen to be Christian, I suppose you still have the consolation of midnight mass to hang onto. If you’re a pagan, you can see reflections of the Great Goddess in the falling snow. If, like so many of us, however, you’re a neo-existentialist rational humanist, or whatever, it becomes an altogether trickier proposition.

Perhaps I should speak for myself, but I think most children are incorrigible materialists. When I was a child I loved pirate stories and fairytales and picture book versions of 1001 Arabian Nights. My favourite bits were the descriptions of the purloined treasure hidden in wooden chests, the opulent wedding gifts showered on royalty. I would linger over lists of jewelled daggers, pieces-of-eight, piles of rubies, emeralds and diamonds taken at sword-point from wayward Spanish galleons. I would relish descriptions of magical lanterns, clockwork songbirds, banquet tables groaning under the weight of roasted boars and flagons of wine.

I think this is one of the reasons that capitalism is such a potent virus. Despite all our better inclinations, so many of us are stirred by childhood visions of the good life. The bitter joke, of course, is that wild-game feasts have been replaced by Chicken McNuggets and Vanilla Coke; somebody switched our treasure maps for Ikea catalogues; our frankincense and myrrh has turned into Winners gift certificates and fake reindeer stools.

It’s impossible to defend loving Christmas. It’s an absurdly guilty pleasure – something along the lines of watching Scooby-Doo at three o’clock in the morning with a box of Turtles and a case of beer. Sometimes I think that all of life in the western world has become a guilty pleasure, a selfish joke. Our rulers are mad men; our planet is on the edge of environmental collapse; our culture is morally bankrupt. And yet we go on living, for now. And, incredibly, for most of us there are moments of unadulterated magic. We turn a street corner and hear a woman playing a cello in an open window. We see the aurora borealis on a moonless night. We hold our lover’s hand in the falling snow.

To me, Christmas is like one of Uncle Frank’s magic shows. You know he’s three sheets to the wind, because he’s just knocked over the Christmas tree and spilled his Guinness all over the new couch that you meant to get Scotch guarded. You know that in a couple of hours he and Aunt Ethel will be resurrecting bitter grudges, and an hour after that, just before he passes out in the laundry room, he’ll be arguing with you about where you hid his car keys. Miraculously, though, even though he can’t walk straight, and you’ve seen this schtick a million times, every once in awhile he somehow guesses that little Suzie picked the three of clubs, and you’re unaccountably delighted. The gold coin emerges from Ashley’s ear, the snow white bird emerges from the black top hat and perches on Jacob’s finger. The children’s mouths hang open in wonder, and your immense cynicism is held, momentarily, in check. 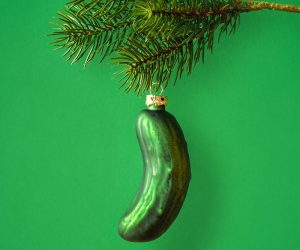 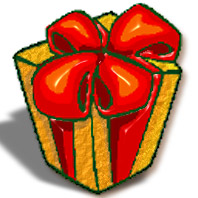