Articles
The Voice
Fast Food Nation: The Dark Side Of The All-American Meal 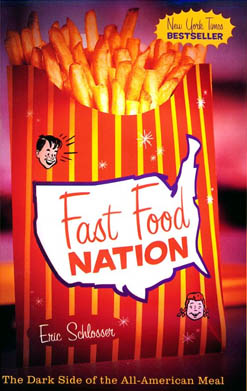 In Fast Food Nation: The Dark Side of the All-American Meal, Eric Schlosser follows the evolution of fast food from its birth in California after the Second World War, to its present status in the global market. In the U.S., the fast food industry has had far-reaching effects as its “demand for standardized products have given a handful of corporations an unprecedented degree of power over the nation’s food supply” (p.5). In looking at these effects, Schlosser interviews a franchise founder, restaurant owners, employees, slaughterhouse workers, ranchers and farmers. His description of the fast food industry’s growth contrasts sharply with the loss of independence and livelihood experienced by the farmers and ranchers that he meets. Schlosser also warns us about the industry’s role in spreading infectious pathogens, its contribution to the obesity epidemic, the shameful exploitation of slaughterhouse workers, and even workplace violence associated with fast food restaurants. “The profits of the fast food chains”, the author writes, “have been made possible by losses imposed on the rest of society.” (p. 261). Schlosser’s portrayal of the industry should make everyone think twice before placing their next burger and fries order.

From crowded, manure-laden feedlots, to feces-spattered slaughterhouses and the admixtures of meat fed into industrial hamburger grinding equipment, the spread of pathogens like E.coli 0157:H7 in the U.S. has been facilitated by modern practices of raising, slaughtering, and processing cattle. For example, Schlosser informs us that old newspaper and sawdust used as litter in poultry plants are turned into cattle feed. He then cites a Preventative Medicine article reporting that in Arkansas in 1994, cattle consumed “about 3 million pounds of chicken manure” (pp202-3). Among other potentially harmful substances, chicken feces may contain Campylobacter and Salmonella.

We also learn about the role of slaughterhouses in the spread of bacterial pathogens. The speed at which slaughterhouses now operate makes it more likely that a butchered animal’s digestive tract will spill feces about and contaminate meat intended for human consumption. Employees, who are often overworked and illiterate, may fail to properly sterilize their knives. Following processing in the U.S.’s massive ground beef manufacturing plants, one “fast food hamburger now contains meat from dozens or even hundreds of different cattle” (p. 204). It is not surprising then, as Schlosser reports, that E.coli 0157:H7 has become the main cause of kidney failure among American children.

Schlosser’s description of a modern slaughterhouse is thoroughly disturbing. He walks through the plant, following the process from end to start: he traces smaller portions of meat through to the cattle waiting to be butchered. On the killing floor thick with the smell of manure, cattle are sliced in half. Workers must dodge suspended slabs of meat that threaten to knock them to the bloody floor. He watches, as unsuspecting cattle are stunned with a bolt to the head, their bodies hoisted up by a leg before their throats are slit. The author exits the slaughterhouse after he witnesses a steer fall from the shackle, and its head becomes jammed in a conveyor belt. The animal is still alive. Elsewhere in Fast Food Nation, Schlosser reports that sometimes animals are dismembered while they are still fully conscious.

In Schlosser’s depiction of the slaughterhouse, the human workers are also victims. Meatpacking, “the most dangerous job in the United States” produces three times the rate of injury seen in most other factories (p.172). In some plants, bonus programs for supervisors and foremen, partially based on safety reports, discourage injuries from being reported. Lacerations, tendonitis, carpal tunnel syndrome, back and shoulder injuries are common. The meatpacking industry’s rate of cumulative trauma injuries is about “thirty-three times higher than the national average in industry” (p.173). According to Fast Food Nation, some of these U.S. corporations have had a history of falsifying injury logs, and failing to provide adequate compensation to injured workers.

The high rate of injury is related to the high speed at which employees are forced to work. Higher speed — higher profits. U.S. slaughterhouse workers have been known to use methamphetamine, or “crank,” in order to keep up to pace. In some instances supervisors sell crank to employees, or offer it as a reward for working a double shift.

In the past, unions helped to protect employees from having to work at a dangerous pace, and the injuries that result from it. Today, however, many U.S. slaughterhouses employ immigrants and foreign workers, often illiterate and unable to speak English. Poor pay and miserable working conditions lead to a high employee turnover rate, helping to ensure that unionization cannot take place. Often these workers do not receive any health benefits. In its efforts to keeping costs low, meatpacking corporations have been aided by the Republican Party, which has weakened worker safety legislation, and opposed improvements to the minimum wage.

The demands of the fast food industry also, of course, influence the working conditions for millions of restaurant employees. Although Schlosser acknowledges that some franchisees do treat their employees well, he illustrates how the fast food industry’s labour record is nothing to be proud of. McDonald’s has made a point of employing unskilled teenagers because, as Schlosser explains, they “accept low pay” and “their youthful inexperience makes them easier to control” (p.68). He details how shabbily McDonald’s has tended to treat employees. In 1973, for example, one group of San Francisco McDonald’s employees was subjected to lie detector tests, in violation of state law. Fast food workers, interviewed by Schlosser in Colorado Springs, indicated that state and federal labour laws were commonly violated in their restaurants. And although fast food restaurants in the U.S. have surpassed gas stations or convenience stores as attractive targets for armed robbery, restaurants, however have fought against “not only guidelines on workplace violence, but any enforcement of OSHA [Occupational Safety and Health Administration] regulations” (p.85).

Furthermore, the fast food industry has often lobbied the Republican Party to help keep wages low. In 1972, McDonald’s Ray Kroc gave $250,000 to Richard Nixon’s campaign fund. At the time, according to Schlosser, fast food chains were promoting legislation aimed at lowering the wages of 16 and 17 year old fast food employees from around $1.60/hour to as low as $1.28/hour. Nixon’s administration gave its support to the “McDonald’s Bill” (p.37).

Schlosser criticizes his government’s failure to ensure the safety of the food supply, as well as its efforts to limit the powers of food inspection agencies. George W. Bush’s administration attempted to end testing for Salmonella in ground beef destined for the National School Lunch Program, until the public outcry forced his administration to reverse its decision.

Bacteria are not the only health risk that Schlosser associates with the consumption of fast food. He asserts that the proportion of obesity among U.S. adults “soared during the last few decades, along with the consumption of fast food” (p.240). Fast food restaurants provide large servings of inexpensive, high-fat meals, to a sedentary society. Years of mass marketing by these same businesses helped American society to develop a taste for food high in fat and calories, and low in fiber. “The annual cost of obesity alone is now twice as large as the fast food industry’s total revenues”, Schlosser asserts (p.261).

Fast food has grown into an international force, but its incursions into foreign markets have often met with resistance. In England, McDonald’s tried to sue members of London’s Greenpeace movement who distributed anti McDonald’s leaflets (even though the two protesters were not responsible for printing the material). According to Schlosser, McDonald’s hired spies to delve into the private lives of the activists, and “McDonald’s spies inadvertently spied on each other, unaware that the company was using at least two different detective agencies” (p.247 8). McDonald’s even used its police connections to spy on the protesters. Scotland Yard eventually apologized and paid Â£10,000 in an out of court settlement for its role in spying on the anti McDonald’s protesters. Fast Food Nation reports that the prolonged trial has entered it twelfth year.

As a result of disastrous publicity resulting from the “McLibel” case, McDonald’s has worked to improve its image. Benefits have been offered to some employees, and the corporation has required its suppliers to treat animals more humanely. This latter policy, however, developed after animal rights groups applied public pressure to the restaurant chain. McDonald’s, Schlosser advises, should also demand that the slaughterhouses that supply it also treat employees ethically.

Fast Food Nation includes a frightening examination of the Bovine Spongiform Encephalitis (BSE) issue. One British expert suggests that “BSE may easily cross the species barrier” (p.286). Indeed, the European Union has banned “the feeding of all animal proteins to all farm animals” (p.286). These concerns have not been taken seriously in the United States where it remained legal to feed horse meat, cattle blood, pigs and poultry to cattle.

Aimed at a general audience, Fast Food Nation is very readable, though sometimes disturbing. Schlosser concentrates his study on the U.S., but given the ubiquitous nature of fast food restaurants in our own country, this book is a must-read for Canadians who are concerned about what they eat. 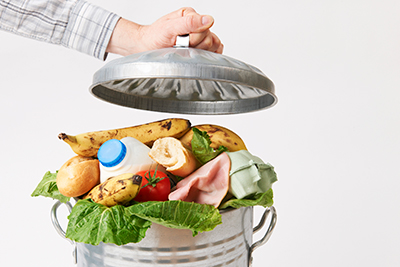