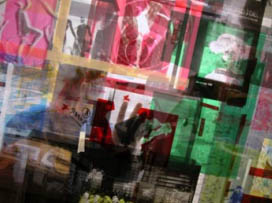 WINDOW A TRIBUTE TO DAYS OF LITH

A new bit of spontaneous art has erupted on the window of Billy Cheung’s office at AU Central. Using old colour keys and negatives salvaged from a cleaning up effort going on in Educational Media Development (EMD), the Instructional Media Analyst has created a visual tribute to the “old days” of course materials; a time before digital ruled, when lithography and printing presses were the industry standard.

From the hallway, the display looks like the sum of its parts; a mash of silver-stained gelatinous sheets. The view from inside is different; a highly reflective white wall opposite Cheung’s window breathes life into the montage. “So much effort, so much crafting went into (this work),” Cheung notes, wistfully touching registration markings. “I think we should remember it.”

Soon, Cheung’s window may be the only reminder of AU’s days of analog photography and lithographic prints. Faced with a physical restructuring of their office space, EMD has charged Visual Designer Margaret Anderson with the task of sorting through the archives. “We’re having to go through all the press pieces and print-based stuff and literally throw everything out or recycle it because there’s no room to keep these things,” Anderson says. “And because we’re going digital, there’s really no need to keep those things.”

This is the second time Anderson has done this. EMD went through a similar process in 1999-2000, when Course Materials Production moved into the Tim Byrne Centre. “It was a really difficult exercise because everyone was feeling really uncertain,” Anderson said. “Most of it got stored into a big plan chest and we’re sorting it out again because we have a much better idea of what’s been digitized.”

Anderson adds that although she needs to be pragmatic about the exercise, she really appreciates Cheung’s aesthetic approach to commemorating the work. “While I was in clean up mode and thinking linearly, while I was able to reflect on history, he was able to make the display and post it. If you know enough about the courses, you can recognize bits and pieces in his window.

“I think it’s a really interesting moment in the history of the university, in that we really are becoming a digital institution, rather than being so reliant on papers and plates and negs,” Anderson continues. “But it’s also hard because it’s so different. It’s cause for reflection because you’re doing it physically and throwing things away. You have time to think about the work done in the past and remember the people involved in production.” 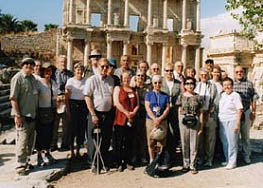 About ten years ago, Associate Professor of Anthropology Sheila Greaves picked up her French Horn again, after a 25-year hiatus. On Tuesday, Dec. 9, Greaves will join fellow members of the Calgary Concert Band to present “Christmas on Broadway,” directed by Dr. Jeremy Brown and featuring vocalist, Michael Hope. Considered Calgary’s premier concert band, the Calgary Concert Band has been invited to tour Austria and Switzerland next summer. A second band Greaves plays with, the Rocky Mountain Concert Band, mostly plays at nursing homes and free community events. “I enjoy the challenge of playing new pieces all the time,” Greaves says. “I like playing with other musicians, and it’s a great way to relax – you really have to focus on the music.”

Did you forget your lunch and your cash? No problem – just take a walk down to the shiny new ATM, located in the A Cafe.

Claude Dupuis has been on the move recently, spreading the word about AU’s School of Business. On Nov. 25, during a University Information Night sponsored by Mount Royal College, Dupuis competed with representatives from Universities of Lethbridge, Calgary and Alberta, to talk to students about Athabasca University and the various programs available in the School of Business. Nearly 80 students attended each of his two sessions and, Dupuis reports, “Afterward, quite a few also expressed their interest in wanting to attend seminar based AU courses in Calgary. “Such events are especially important to us,” Dupuis continues, “because it serves to put a “human face” on AU and the School of Business in the city of Calgary. It’s my hope that someday there will be as strong an AU academic presence in Calgary as there is in Edmonton, which could contribute to a significant increase in enrolment, and that’s something I’d like to be part of.”

“It’s too early to talk of impact,” notes Executive Director, External Relations Stephen Murgatroyd, “but the sessions were warmly received everywhere – especially by staff who wanted their voice heard. Staff throughout the University – especially support and professional staff – welcomed the opportunity to discuss ideas and concerns with the Executive team. And we, in return, welcomed the opportunity to have new issues presented to us.” According to Pat Eagar, Vice-President, Finance and Administration, holding such sessions is not only good for the morale of the University, but also serve as a “cross-location communication strategy.”

“Another thing I heard from staff at different locations was how important it was to hear bout what the “University” was doing,” she said. “It didn’t seem to matter where we went, one site learned about initiatives that other areas of the University are working on and that they can benefit from.” For those who are unable to attend the sessions, Executive’s PowerPoint presentation is available for viewing at http://www.athabascau.ca/intra/presoffice/presentations/index.html

“We remain very interested in your feedback,” says AU President Dominique Abrioux. “If so inclined, please forward (your) comments to any executive officer. If received by Dec. 5, they will help inform our own debriefing.” 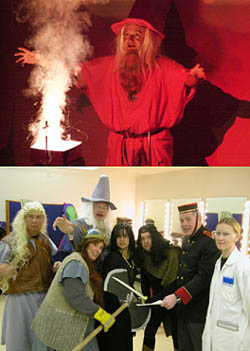 Lord of the Benzene Rings captures imagination of young and old

To cries of “cool,” and “awesome,” and gales of laughter, the cast and crew of Lord of the Benzene Rings opened this year’s Chemistry Magic Show, Tuesday, Dec. 2, to a full house of bright young minds from Athabasca-area schools.

“Gandalf the Grey” (then “Gandalf the Pink”) replaced “Gandalf the Great”, chemistry “dorks” replaced “orks,” and “Block riders” of the Periodic Table of Elements replaced the “Black Riders” in this adaptation of the popular Lord of the Rings trilogy that incorporated elements of local geography and popular culture to demonstrate how much fun science can be.

And it was fun! Loud bangs, bright explosions and liquids that continually changed colour were combined with self-deprecating humour to create 80 minutes of knee-slapping adventure.

Sponsored by Athabasca University and Science Outreach-Athabasca, the production brought together a wide range of “acting” and scientific talent from the gamut of community organizations, even drawing upon the help of a couple of young “vic- er! – volunteers” from the audience.