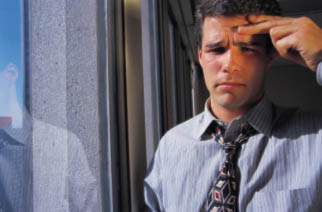 Before coming to law school I considered myself to have relatively sufficient control over my stress levels. I had a busier than average life, juggling fulltime work, part-time distance university education, labour advocacy, wife, children, dogs, cars, bills, mortgage, writing: Well, you get the picture. Even with an accumulation of multiple stressors such as those, my stress level rarely reached more than an easy boil.

Then my wife and I quit our jobs and moved the family across two provinces so that I could attend law school. A well-worn and well-known adage amongst the legal community pertaining to law school goes something like this: “the first year they scare you to death, the second year they work you to death, and the third year they bore you to death”. If “scare” is synonymous with “stress” then I can attest to the validity of the saying. My easy boiling stress pot has morphed into a heavy-duty pressure cooker; the intermittent twitch over my left eye could represent a pressure release valve blowing off steam. I am putting far more time and energy into law school than I expended in my previous life. Granted, many of my responsibilities have remained, but other than my familial duties, I devote myself fully to the law.

A lawyer-friend of mine insists that the law school program is designed so that it is practically impossible for a student to complete all of the assigned readings; thus one learns to sift through the masses of legal cases and commentary, prioritize, and extract only pertinent rules and information. Lawyers need to be efficient. It is a difficult skill to master and until one does, the experience could be related to a non-swimmer being thrown into the ocean to sink or swim on his/her own. At its worst, my stress has manifested itself physically, which I have never knowingly experienced before. In its more mild form, I experience a combination of agitation, panic, and anxiety.

Sleep has never been one of my greatest abilities. I often feel like I am suspended between sleep and wakefulness, being aware of my surroundings and concomitantly that I am asleep. This state occurs nightly now and my seemingly conscious mind becomes a reluctant observer as my subconscious brain endlessly reviews a Boolean loop of legal rules. I have discovered over the years that this is how my brain internalizes information when I am learning new skills; however, the process results in substandard sleep and contributes to fatigue”?and stress. I had an amusing dream a few weeks ago. I was running desperately while being chased by a tidal wave. Glancing over my shoulder I noted that the foamy froth riding the top of the wave sported the grimacing faces of my five law professors (if you’ve seen The Fellowship of the Ring just picture the horse heads in the river-froth that dismounted the Nazgul at Rivendell).

Last Saturday my family moved for the second time in three months. I hired three men and a moving truck and we worked for 13.5 hours before the job was done. I spent Sunday gimping around or lying in bed recovering from the exertion; all the while knowing that the wave was approaching ever closer as I fell further behind in my readings. Presently I am not very stressed. I find this rather surprising since the first of my midterm exams is tomorrow afternoon”?Property Law. I am not sure if I have outdistanced the wave or if it has washed over me and finally dissipated: Either way, I am feeling contented for the first time in weeks (months). The point of this long-winded diatribe is a round-about explanation as to why I missed my Voice article last week”?the first since I became a columnist over two years ago. If the wave returns, I’ll try to surf it and keep on writing: