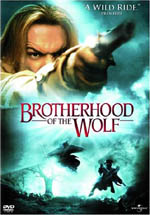 Magnificent camera work and intricate plot make you stay put. I am astonished at this film’s impossible to describe genre. It is a sludge pile of martial arts kick-fest, medieval art project, baudy sex romp and science fiction. This project from France is labeled a “horror,” but honestly I see that as only one aspect of this particularly unique film. Forgive me if I fail to truly capture the complexity of this film. The only thing you need to know -it works.

One unfortunate problem is the subtitling – it isn’t that it is that hard to read — maybe for some people who are slower at reading — but that it forces you to stop looking at the incredible scenery on the screen. I had to jot down the name of the director of photography, Dan Laustsen, who captured creepy and yet magnificent beauty during this production.

Canada has a part in the project:or at least through scripting. Our “native Mohawk/ Iroquois” character Mani is a dear friend and wolf-hunting partner to France’s Fronsac — the two having met and bonded in New France, a.k.a. Quebec. Actor Mark Dacascos (Mani) was born in Hawaii and grew up in Germany. Mark is fluent in German and does well in Mandarin! His French was pretty darn good in the film too but I guess with very few lines he managed to cover up any problems. Read more on this actor at his website http://www.dacascos.com.

The language is no barrier between the characters but since the film takes place in 1764 I wonder if North American natives would have had problems understanding men from France at that time? I’m willing to suspend disbelief if you are.

What’s the plot you ask? Oh man:let me try. A beast of some unknown kind is ripping people apart across the French countryside in the mid 1700s. The attacks are attributed to a wolf. Panic ensues and the King orders the animal killed.

Together Mani and Fronsac are forced to track down wolves:and an icky scene of slaughter occurs. Thankfully both Mani and Fronsac disagree that the beast is one of the ordinary wolves that have just died to satisfy the many frightened people. Fronsac is versed in natural healing and later proves he can more than hold his own in defense strategies. He is also a gifted taxidermist and is forced by the King’s official to “end” the hunt by taking a slaughtered wolf and altering it to make a beast of horrific proportions. Under the King’s direction, Fronsac gets out his tools and, with the aid of some straw, paint and some fake teeth and eyes creates a “fearsome” beast that the royal court is delighted to put on display. Except of course the real beast has only been shown in shadows and is far more hideous. Spikes, fangs, and about the size of a Sasquatch! The work of Jim Henson’s team has made a fearsome screen beast that we would rather avoid on a stroll to : anywhere.

A twisting, turning plot finally reveals that the beast is an African import that has been trained and forced to be more and more ferocious by a man with a twisted mind:and his equally twisted daughter! The beast has been utilized by the church to enforce the teachings of the Bible. Quotes about the wrath of beasts are used to frighten the poor villagers – thus drawing more people to a “pious” life. The quirky order meets in secret but our big showdown finally reveals who is doing what to whom. The plot in this film makes some of those “surprise” plot twists in film thrillers look pretty amateur to me.

Sex is involved although again handled in the most uniquely styled manner and is anything but gratuitous. Even the local whorehouse has important characters who are important to our finale. For more detailed plot I will only say that the wolf revamping is not the end for Fronsac and Mani. They hunt for the real beast in quiet. Although Mani is a victim toward the end, Fronsac eventually gets his man : oops! Beast.

If you can overlook some gruesome scenes this film is a must see for those who respect film that is done right. This project is rated R for nudity, sexual scenes and gore.

I truly must dedicate my last “new” review of the year to our Voice editor, Tamra. Thanks for tipping me off to this amazing film. I hope this review agrees with your assessment of a film you spoke so highly of to me.

Hope all of the Voice readers, and my fellow writers will have a great 2004! –Laura