Articles
The Voice
A Hole In The Heart 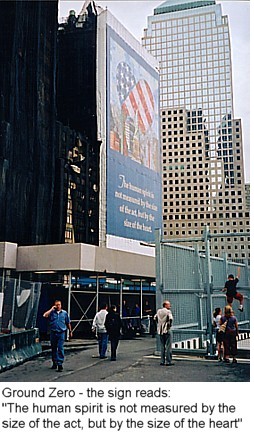 Published on September 3, 2003 [v11 i36], A Hole in The Heart gave Voice readers a glimpse of the aftermath of September 11th from two angles: the commercialized, tourist curiosity that Ground Zero has become, and the raw, emotional aftermath that still haunts the citizens of New York.

A few months ago, I found myself, quite unexpectedly, planning my first trip to New York City. For weeks, I pored over travel guides, and checked out websites, all in an effort to compile a must-see list for myself. With only four days in the city, I wanted to make sure I was organised. I didn’t want to miss anything.

As the departure date neared, the list grew and grew. I had no idea how I was going to fit it all in. The list included things like SoHo and TriBeCa, Greenwich Village, NYU, Washington Square, Chinatown and Little Italy, Times Square, Fifth Avenue, Central Park, and Rockefeller Center. I definitely knew what I did and didn’t want to see, except for one place: Ground Zero.

In all honesty, I wasn’t sure I wanted to go to Ground Zero at all. My feelings were ambiguous. On one hand, I wanted to go so I could comprehend the enormity of it, to try and reconcile the images I’d seen repeated again and again on CNN; yet, at the same time, I was worried that I would be going for the wrong reasons. I didn’t want it to become just another must-see on my list, somewhere between the Statue of Liberty and the Staten Island Ferry. It seemed crass and disrespectful. Sort of like one of those people who slows down when they drive by an accident on the highway, except on a much grander scale of course. In the end, I decided to leave it up to chance. I didn’t plan on going, but I didn’t rule it out.

After two days of exploring Manhattan and loving every minute of it, it became harder and harder to ignore the fact that there was a hole in the heart of the city; a hole that was now as much a part of the city as any of the places that had made it on my list. Finally, on the third morning, I decided to go to Lower Manhattan and see it for myself. I got off the subway, made my way up the stairs, and headed in the direction of where the World Trade Center had once stood. As I walked, I worried that I simply wouldn’t feel anything. Would I be one of those people who after growing up with excessive violence in movies and on TV would be unmoved by the visible aftermath of its manifestation in real life? Would I be numb to it? That truly scared me the most. Being a twenty-something who had never known life without TV, and who is quickly forgetting life before the internet, I hoped that seeing Ground Zero would help me dissolve the disconnect that occurs when you are bombarded with violent imagery every day.

One minute I was walking along the sidewalk surrounded by skyscrapers, the next I was faced with towering metal fencing. From a distance, it looked no different than any other construction site, except that many of the buildings surrounding it were enshrouded in black mesh tarps, almost as though they were mourning the losses they had witnessed.

Two years ago, we saw history being rewritten before our eyes. We witnessed, from the comfort of our living rooms, a day that will go down in history. September 11th 2001 is now one of those days where anyone you talk to can tell you where they were when they heard (I actually found out when I called one of my Athabasca tutors for a phone quiz, and she told me).

As I looked around, I tried to come to grips with the fact that thousands of people had lost their lives in this very square block. The images I’d seen of the planes, smoke, fire, people running and crying and screaming, of people hanging from windows, jumping out of windows, of the towers collapsing, of people trying to outrun a wall of debris, of firemen, of policemen, and later of families crying and searching, of missing persons’ posters, of hope, of fear, of anger, of terror; later yet, of clean up efforts, and memorials, and remembrance. All these images swarmed through my mind, yet as I stared down into the huge hole in front of me, it all seemed unfathomable. How could those horrible things have happened here? I simply could not reconcile the images I’d seen for days, on a screen in my living room, with the scene I saw before me. They seemed so far removed from each other. While I remembered the horrible images I’d seen, I felt a myriad of emotions; yet as I peered through the fence at a cross made of steel girders, I felt little.

I looked around me. A sadness overtook me, and not for the obvious reasons. All around the fence there were people with cameras around their necks jockeying for position, trying to get pictures. To my left there was an Asian family posing in front of the fence with big smiles of their faces, as though they were at Disneyland. All along the sidewalk opposite the fence were stalls selling 9/11 memorabilia, and certainly no lack of people willing to shell out money for a flag, a pin, or even a glossy magazine featuring pictures from the tragic day. It made me sick to see blatant profiteering and consumerism thinly veiled as patriotism and mourning. The more I looked around the more disillusioned I became.

As I walked down along the water towards Battery Park, I had mixed emotions. I was glad that I’d been, in that I may have always wondered if I hadn’t. At the same time, I was extremely disappointed. I felt as though I had just witnessed some sort of sick roadside attraction. If anything, the visit to Ground Zero had made my emotional disconnection from the event even greater. 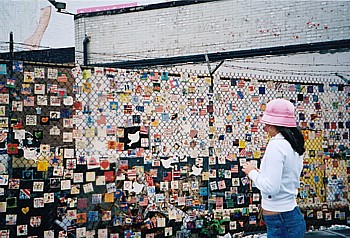 The next morning, I got up determined to enjoy my last full day in the city. I took the subway over to Greenwich Village for an early breakfast and a day of exploring. It was as I was walking around that I came across a metal fence, nothing like the one at Ground Zero, yet related to it all the same. Covering the fence were little hand-painted ceramic tiles, which looked as though they had been painted by children. Each one depicted an image that revealed the feelings of each child in relation to September 11th. It was as I stood looking at these tiles that I truly felt a connection between the horrific images of that day and the feelings of the community that had had to deal with it. The simplicity and beauty of them seemed so far removed from the glossy commemorative magazines and buttons being sold for a profit, which is what made them all the more powerful. The tiles were simply depictions of feelings in relation to the terror of that day. I was, in essence, looking at a display of feelings. The fact that, in a city of millions, these tiles have remained untouched and intact is a testament to the power they hold. It was right there in Greenwich Village, in front of that fence, miles away from Ground Zero, that I truly felt the hole that that day had left in my heart, and the hearts of all who witnessed it.

Photos provided by the author.