Articles
The Voice
From My Perspective – A new grading system

Published on December 18th, 2002 [v10 i49], Debbie Jabbour’s explanation of the new AUSU grading system is so comprehensive that AU provides a link to the article on their website. If you’ve been having trouble understanding how the new grading system affects you, read on!

AU is going to a new Alpha/4.0 grading scale for undergraduate studies, effective January 1, 2003. This is an important change; part of a province-wide project that will see all four of our universities moving to a common scale. What does this mean for students?

Obviously a better solution was desirable, so in 2000, the Universities Coordinating Committee, responding to an initiative by the Alberta Council on Admissions and Transfer, established the Common Grading Systems committee to identify a grading scale that was “academically sound, attuned to the needs of students, and readily recognized by other universities, professional licensing bodies, employers and the public”(1). The CGS Committee recommendation was to convert to the “4.0 grading scale that distinguishes between A and A+ in alpha but not on the 4.0 scale”(2). Not only will this facilitate within-province transfers, it is hoped that inter-provincial transfer arrangements and graduate school admissions will also be simplified, since most North American universities use the Alpha/4.0 scale.

Alberta already has one of the most efficient systems of transfer credits, operated by the Alberta Council on Admissions and Transfer (ACAT)(3). ACAT is working with other organizations across Canada to examine articulation agreements between educational institutions, building on the premise that “credit transfer mechanisms are essential to lifelong learning and employability”(4). The Alberta Online Transfer Guide is a handy tool that allows Alberta students to easily verify course equivalents among all of the participating Alberta universities, colleges and technical schools (5). British Columbia also has an extensive transfer guide, but other provinces still have foundational work to do on such a system (6).

ACAT is also part of the Pan-Canadian Protocol on the Transferability of University courses, adopted in 1995 by the Council of Ministers of Education in Canada (CMEC). The goal of this Protocol was to ensure cross-Canada recognition and transferability of all post-secondary credits. Alberta’s universities and colleges were the first to affirm the Protocol in 1995, indicating that their practices already conformed to the Protocol (7). Most other provincial universities have followed suit. For students taking Athabasca University courses, the ease of transfer between institutions and provinces is an absolute necessity, and the change to a common grading system is another improvement to the process.

On the 4.0 scale, an A and an A+ both convert to a 4.0. This has given rise to concerns among students who feel that their + honorific will be lost. For example, a student transferring to the U of A under the old 9-point scale would receive a 9 with an A+, but only an 8 with an A. In some universities this is adjusted for by adding to the 4.0 scale and assigning a 4.3 to an A+. Alberta universities argued against doing this, since this could artificially inflate marks, and disadvantage students transferring to professional schools that do not mark higher than a 4.0. The U of A cites evidence that such inflation does occur, and that maintaining grading standards by keeping the 4.0 cap is a better way to proceed. A 4.3 A+ is often rounded down to a 4.0, while an A would be rounded down to less than 4.0, so advantages to a 4.3 system are “minimal to non-existent”(8). The U of C points out that universities using the “fine GPA” will recalculate marks based on their own criteria. They are addressing this by allowing instructors to put the + on student transcripts to make external evaluators aware that a student’s work is outstanding (9).

On the other end of the scale, the D- has been eliminated, and a grade of D is considered minimum pass, with an F a fail. This will help alleviate problems that previously occurred between institutions where minimum pass grades were different. The U of A “9 to 4” site gives a very helpful explanation of how failing and minimum pass grades will be converted (8).

The second part of the change involves the calculation of the Grade Point Average (GPA). At Athabasca University currently, a student’s overall grade standing is currently calculated on a straight percentage/average basis. This means that student average is calculated by adding up total percentages from all courses, then dividing by the number of courses. Now the GPA will be calculated on the following weighted average:

The formula and grade assignments are explained in detail in the Undergraduate Grading Policy, but an example of how GPA is calculated is given below (10). Grades will be calculated based on the following scale. To simplify this, I’m not listing the exact grade points for each percentage, but they are listed in detail in the AU Undergraduate Grading Policy (10). An example would be the percentage variance from 80-84, which would be calculated as 80=3.70; 81=3.76; 82=3.82; 83=3.88; 84=3.94. 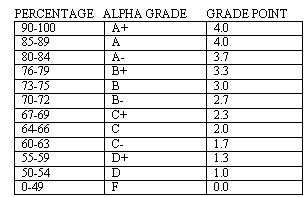 If you take 5 courses, here is a rough example of how your GPA would be calculated (numbers are truncated, or shortened): 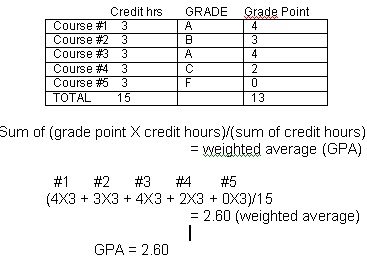 Instructors will also need to adjust to the new marking system. At the U of A, instructors are being oriented to the new system and encouraged to “separate marking and grading” using verbal descriptors (excellent, good, etc.) in evaluating the student performance and to assign the alpha grades accordingly (11). The new system, therefore, is much more than just a change of marks, it requires a change in how instructors and students think. It will be of benefit in reducing some of the subjectivity used in marking. On the other hand, students who work hard for individual percentage points may feel disadvantaged. It will take all of us some time to get used to the new system.

Overall the change will be of particular benefit to students at Athabasca University, since we rely so heavily on the ability to transfer courses easily. Implementation in Alberta is just a beginning – since all the provinces of Canada have agreed to work toward implementing the Pan Canadian Protocol, it is likely only a matter of time before other provinces follow suit and move toward a common grading system as well.

If you want further information on the background of the conversion to the 4.0 scale, the U of A 9 to 4 website is an excellent resource that offers a clear and coherent explanation of the process (8). I’d also encourage you to check out the ACAT website (3). It contains a great deal of interesting information on transfer patterns for universities in Alberta; and for Alberta students, the Online Transfer Guide is extremely helpful. For a detailed explanation of how Athabasca University will be implementing the change, see the Undergraduate Grading Policy (10). Don’t hesitate to ask questions as well the Registrar’s Office will be happy to explain how it all works; the AUSU discussion forum has a topic thread on the new grading system; and you can email any of AUSUs Council members for information.

Debbie is a native Edmontonian, and a single parent with four daughters. She has worked as a professional musician for most of her life, and has enjoyed a rich variety of life experiences – with many more to come! Debbie is working towards an eventual doctorate in psychology, and currently serves as the president of the Athabasca University Students’Union.

From My Perspective – A new grading system

A Bug In Your Ear: CHANGES TO THE UNDERGRAD GRADING POLICY AT AU!