The Sounding Off column is where AU students have their say on a variety of topics. It can be difficult to convince students to comment, and this column often is not included in The Voice due to a lack of response. Once in a while, however, a topic strikes a chord within readers, and many write in, making this column a powerful statement of the passion of our readers, and a fascinating read. For this retrospective issue, I have selected three of the topics that sparked the best response.

Remember, readers may submit ideas for future Sounding Off columns:

Voice readers Sound Off on the US War on Iraq

DEBASED
Small meaningless men
Egos of a king
Worlds turn thou remain the same
Delusions of equality
Wars fought on holy ground
For posturing and things
We look to them as leaders
All they are, are fiends
Continues through the ages
Resolution an elusive thing

I’m still sitting on the fence on this one. Wars are never good, thousands of innocent people die, families are separated, violence is witnessed. Mind you though, tyrannical dictators who do harm to their own people are never good either. Either way, people will die. It’s horrendous to believe that thousands of people can support Saddam, out of respect or fear, probably more of the latter. Wouldn’t it be best to just get rid of Saddam and his regime? With all the technology the US military has can’t they just point a missile to his house and shoot? With only American news stories to go on, how can I honestly make an informed decision about what I believe would be the best thing to do?

Comedian Jay Leno recently said that Bush may be the smartest military guy in history – waiting until he destroys all of Iraq’s weapons, then he declares war. I’d argue that this is not military smarts, this is bullying at its finest. And I have a lot of questions…

Who or what has given George W. Bush the right to dictate a regime change in Iraq? I’ve heard that he believes he has god behind him in this fight. According to the Dan Rather interview with Saddam Hussein – Saddam too, believes that Allah is with him. Terrorists flying jets into buildings also think they are doing the will of god. What makes Bush’s god superior?

Democracy? My understanding of democracy is that it represents the will of the people – not the will of a foreign government. How can you impose or force democracy on people? Is this not a paradox? I wonder who will be next on Bush’s list of countries requiring a change of government? Has Bush asked the Iraqi people what they want?

Does Bush really think that launching war against Iraq without the support of the U.N. (or much of the world) will reduce the hostility the Middle East already feels for the U.S.? Won’t this increased hostility escalate terrorism?

Check out: http://www.rootingoutevil.org/, an organization that is challenging dangerous nations by “sending a weapons inspection team to the United States to inspect the chemical, biological and nuclear weapons produced and concealed by the Bush regime.”

While in the long run it may be necessary to do something to keep Saddam Hussein and his sons contained, the way the United States is going about it seems completely wrong to me. A unilateral attack will only serve to increase hostility to the United States and expose its citizens (and through them, us) to a larger threat of terrorist retaliation.

I would feel a lot more comfortable about the entire thing if the United States government was not so obviously trying to spin its own people into believing in the necessity of the invasion. What are the real reasons that the White House is afraid of telling its own people?

The USA economy is a war-based economy. It has been proven that the growth is tremendous when they are in some conflict with some other country. After a conflict, USA helps rebuild the country, increasing their productivity and in turn helping their own economy. Also, it is a fact that USA gets over 70% of their oil from the Middle East. Therefore, it is very important that USA gets the oil at a lower price. Can you visualize a $50.00/barrel price? Can you see the rate of inflation in the USA? Look at what we are paying with a $32.00/barrel price. Look at the increase in the rate of inflation in Canada after an increase of a few dollars.

Finally, who trained Saddam! Who was instrumental in putting Saddam as a dictator in Iraq? We all know what dictators do when left alone. Look at Africa, South America, etc. and see what happens.

They say that 50% of the population in Iraq are 14 & under. What % are women? What % is left to defend their country? I am not defending Saddam, but their must be a more diplomacy and humane way of dealing with this situation.

Bush keeps saying God Bless America, but about the defenceless and innocent people in Iraq.

One more question – Why cannot Bush and Saddam have a dual instead?

Student Trevor Siwak chose to respond with photos from an anti-war rally in Ottawa this past weekend: 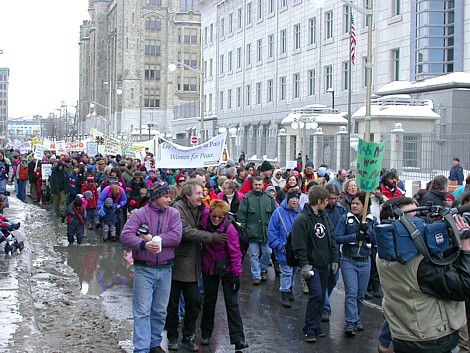 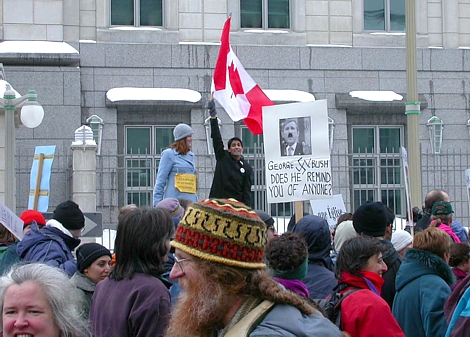 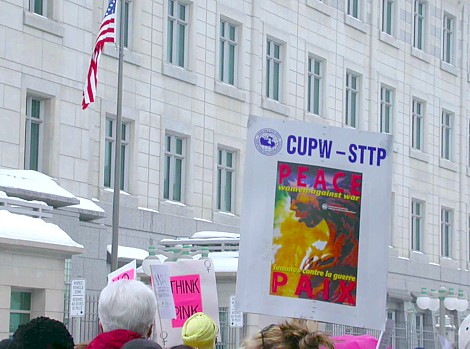 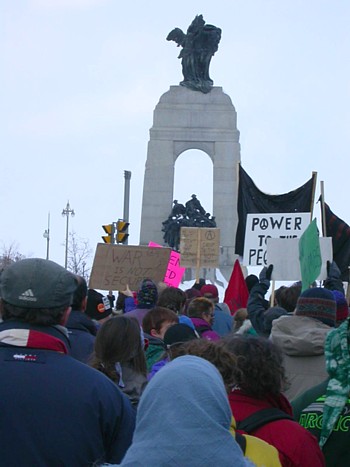 All photos by Trevor Siwak

I rarely believe politicians and always look for hidden agendas. But, I don’t automatically disbelieve either, or I figure I’m no better than someone who swallows everything without question. Now, though, I’ve lost all faith in the US government. It was never established that Bush was fairly elected, yet he accepted his office as though it was his divine right; By popular vote, he was far from popular. His lack of knowledge and understanding on most issues is frightening, and his drive to divert attention from his failure to deliver Osama Bin Laden [a foolhardy and childish promise] is clear. Perhaps Saddam is a threat, but without question Bush will benefit enormously from this war. It chills me that the most popular Presidents in US history have been the ones who have led wars, and that Dubya’s approval ratings skyrocketed the moment the Trade Center went down. I also sense that Bush is driven to ‘put down the varmint that his Daddy couldn’t.’

That US citizens are denouncing countries that do not back their war only reinforces the importance of not bowing to US pressure. They guarantee their citizens free speech, but won’t abide countries that hold different views. How can they promise intellectual freedom to individuals when they can’t permit it in independent nations?