Articles
The Voice
From My Perspective – Graduate Studies Begin! 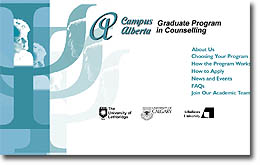 I first became aware of the Master of Counselling program about four years ago when I responded to a questionnaire assessing interest in the development of a distance Master of Counselling program at AU. I then forgot about it until several months later. One evening I received an email that appeared to be related to this questionnaire, but did not contain any helpful information – in fact it looked like a test email of some kind. In short order, I received dozens of copies of the same email. If you responded to the email, it would bounce back with dozens more. I quickly realized there was a technical problem and did not respond, but other recipients were not so quick to catch on. My inbox was soon filling up rapidly with angry responses, demanding that whoever was sending these messages stop immediately. Of course, any response or attempt to explain would generate even more messages! The email deluge went on for several hours. I tried contacting the university help desk, but there was no answer. In desperation I even contacted the then-president of the AUSU, hoping he might be able to help.

Finally I gave up and shut my email down for the evening. The following day a message of apology came out to all who had ended up buried under this repeating email bounce. I just took this all with a sense of humour – realizing that with technology these things can happen. It was heartening to at least have confirmation that the Master of Counselling was being worked on and might soon become a reality. Some time later more concrete and valuable information began to arrive, with the announcement that the program would finally become a reality with a first intake in January, 2002.

At the time I had just barely become a full time student at AU, so I knew I still had a few years ahead of me before I would be entering any master’s studies. I figured if I worked really hard I could graduate in 2001 and make the first intake in 2002. I soon realized this would not be possible, so I set my sights on graduating in 2002, hopefully making the second intake of the Master of Counselling in January of 2003.

My hopes were high for this alternative plan, but it soon became apparent that I was not going to make a June 2002 graduation date. I had joined student council early in 2001, and by the end of that year had been elected president. The heavy AUSU workload set my studies back a year, so I resigned myself to waiting a bit longer. Early in 2002 I contacted Sandra Collins, the director of the Master of Counselling program, to ask if I might be admitted to the program if I was still completing my undergraduate degree when I applied. I thought I could finish up the last few courses by December, and be ready for January, 2003. To my great disappointment, I was told that unless I had actually completed my degree when I applied, my application would not even be considered. Sandra explained that because the program is a collaborative one with two other universities, I could not expect the same type of flexibility I was used to at Athabasca University. Due to high numbers of applications to the program, entrance requirements were very strict, and the admissions committee would not consider any applicant who did not already hold a 4-year undergraduate degree.

I was very upset, but finally resigned myself to having to wait yet another year. As it turns out, that was probably a good decision, as trying to push to finish in June that year would have taken a serious toll on my health and family.

This spring, knowing I would be graduating in June 2003, I once again investigated the program thoroughly, in hopes of finally being able to apply. By now the website had far more comprehensive information than in previous years, and I was able to get a good sense of what would be involved in master’s studies. I had most of the website memorized by the time I actually started to fill out the application forms! As I went through the application process, I was feeling somewhat apprehensive. I knew I would be graduating with good marks, but the program requires more than academic excellence. It also requires a significant amount of experience in the counselling field, and I knew I was deficient in that regard. Although I had plenty of prior learning and informal experience in counselling, I didn’t have a strong work-related counselling background. I knew my acceptance into the program could be affected by this, since preference was given to those with at least three years counselling experience.

Part of the application process required three referees. Each referee was to fill in a specific referral form that could only be accessed once I had applied, and they were to send the form directly to the program in Calgary. Asking for references is a funny thing. You don’t always know what to expect, and I sometimes feel like I’m imposing on people by asking. Because this reference required that the referees had to answer a specific set of written questions and send the document directly to the University of Calgary, I had to trust that those I asked would follow through. My first two references responded immediately and sent me a copy of what they had filled out and sent in, but the third, my supervisor at the addictions help line, did not. In fact, as the deadline approached I became worried that she had not even done the reference, so I contacted her. Good thing I did, since she admitted that she had forgotten. This didn’t really surprise me, since my employers at the help line had never been particularly supportive of my university studies. I respectfully asked if she could possibly do it immediately and courier it. She agreed, but I had to reimburse her costs. I then waited in a panic, hoping that the reference had arrived at the University of Calgary in time. I checked my bank account every day, since I figured that if my application cheque cleared that would be a sign that everything had been received successfully. Finally the cheque went through, and I subsequently received confirmation that all components of my application had been received, and that a decision would be made in August, 2003. So I settled down to wait patiently for the next three months, hoping all would go well. It was a long wait.

Some statistics on the Master of Counselling program:

“¢ First year of the program: 2002 (January intake).
“¢ The program has received approximately 350 applicants each year in 2001, 2002, 2003 (applications received in spring for a following January start date)
“¢ 60 students were admitted in the first pilot group in 2002
“¢ Second intake for 2003 totalled 100 students, and 115 have been admitted for this January, 2004.
“¢ Goal is to admit 100-120 students every year
“¢ Admission criteria includes minimum academic requirements, and those with a minimum of three years counselling-related experience are given preference
“¢ Minimum academic requirements include:
“¢ “¢ “¢ four year academic undergraduate degree with a minimum 3.0 GPA on the last two years of the program
“¢ “¢ “¢ Minimum of 9 credits in psychology
“¢ “¢ “¢ Approved prerequisite coursework for Learning, Developmental Psychology, Counselling skills.
“¢ The first pilot group is due to complete the final course requirements in December, 2004 and will convocate in the spring of 2005.