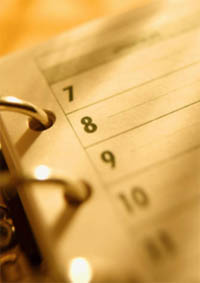 There is a well-known saying, “be careful what you wish for, you might get it.” I certainly learned the wisdom of that over Christmas. In discussing my level of personal stress in my last Voice article before the holidays I said, “perhaps if I can sleep for a week at Christmas I’ll recover!” Prophetic words, indeed. Since Christmas day I’ve been down with the flu, barely able to drag myself out of bed. Once again my physical body has made a decision for me – either slow down and rest or you’ll have it forced upon you!

Prior to getting sick, however, I did have a wonderful Christmas with my daughters and friends, and I hope the same was true for my fellow AU students and Voice readers.

In looking towards the new year, I’m increasingly realizing that I must stop trying to be a superwoman who can do it all. Its difficult to shake that attitude, though. I think it’s something I have in common with many AU students who are starting our university studies and careers later in life. I find myself constantly adding up the number of productive years I still have left, calculating how many of my dreams and goals I will be able to cram into the years that remain. It’s silly, really, but I can’t seem to help myself. I still feel that somehow I’ve not really done enough in my life up until now, and that I have to work extra hard to make up for all the lost opportunities.

When I first started university eight years ago, for a while initially I felt resentful that I had not made the choice to go to university when I was younger. Then I started to think out what might have happened, and where I might have ended up, had I entered university at age 17 when I graduated high school.

At 17 I was somewhat idealistic and rather opinionated – biased towards the way I had been brought up and stuck in the belief system ingrained in me by my family. Going to university would have meant rebelling against that belief system – something I was not quite ready to do at that age. If I had, I probably would have done a double major at university, music and psychology. But I would not have gone on to a career in psychology at the time because it did not fit into the family belief system. It would simply have been a means to an end – which would have been a well-paying job. I was not ready to understand the complexities of human nature and how I fit in, nor was I ready to embrace the study of psychology with the passion required.

More importantly, I did not have the benefit of experience. Had I gone to university then, I would have postponed one of the most important educational experiences of my life – living in Central America. That experience led to my first marriage and birth of my daughters. I say postponed, because I believe I would have traveled regardless – however, the order in which these events occurred would have been different.

I also had another type of opportunity at age 17 that I rejected. I was offered a job as a keyboard player with a band that was going on a world tour. First they were booked in Japan for a house gig that would last for several months. But again, my family belief system interfered and I chose not to go. I was not in the right emotional or mental state of mind to have taken advantage of such an opportunity at that time. I’ve had regrets, of course, for losing out on what could have been a marvelous educational experience. But making that choice would have altered my path, and the outcome might not have worked to my overall advantage.

The path I did choose led to me living in Central America, marrying and having children. This is something I will never regret, since the combination of choices and their timing resulted in four wonderful daughters who have enriched my life immeasurably. The path I chose also led me to making an essential personal change that has impacted my life profoundly – giving me the ability and strength to challenge and reject the belief system I had been raised with. Without the particular combination of choices and the resulting consequences, I might have never broken free. I needed to go through those experiences to make that personal change. Had I not reached that point, it is possible I may not have gone back to university even yet.

I guess what I’m trying to say is that we should never regret any of the time we’ve spent in the past, regardless of what we have done and the apparent “rightness” or “wrongness” of our choices. Everything in life, every experience, is an important piece of the completed whole that makes us who we are. Things happen for a reason. I may be graduating late in life, but I’ve now got the benefit of an amazing and diverse life experience that has given me a true appreciation for the field of psychology.

This has been brought home to me during my studies in PSYC 205, Career Development, and portfolio development. One of the most revealing assignments of the course is the first one, in which you are asked to prepare a “personal history timeline,” including significant events and experiences of your adult life. The course manual suggests including “jobs, volunteer work, special training, travel, raising children, books read, hobbies, personal encounters, or formal education and training.” I started the process with the events of my final year of high school, and found myself taking a long (and sometimes painful) walk through memory lane. It was a slow process, and I would often need to leave the assignment for a while, and come back after I had jogged my memory for yet another important event long forgotten.

The assignment did not just involve listing the events, it also required finding the significance of each. I took each of the timeline experiences and related them to what I had learned from the experience, and how it contributes to the skills and abilities I bring to my chosen field. When I worked for the city planning department back in 1976, how could I have known that the skills I acquired typing land titles and planning documents would come in handy when I needed to know how to write and interpret student council policies? Or when I sewed flamenco costumes for 60 dancers fifteen years ago, how could I have known that these skills would translate into being able to manage large projects and groups of people? Even negative events could be translated into something of value. My experience of being injured in a car accident helped me learn about different treatment options, how insurance companies and injury lawyers work, and gave me a sympathetic understanding of the issue of chronic pain.

The important part of the whole exercise, of course, is that you equate everything you’ve done into what you learned from it, and how those skills are of value to you in your career now. The timeline process really helped me appreciate the importance of everything I’ve done in my life, and helped me to get a perspective on not being resentful because of the choices I’ve made. These choices have given me an efficient set of tools that I would not have had otherwise, and I believe they will come in very handy as a psychologist.

Another valuable assignment in the course is that of identifying career and educational goals, then explaining how these will be achieved. I came up with ten goals that are important to me, along with a realistic set of steps I must take to get there. This assignment took me back to some of that discouraging thinking – calculating how many more years I have left to actually accomplish everything I want to. I was forced to take a hard look at my goals and do some prioritizing. About that time I had a dream.

In another article, I’ll expand a bit more on my philosophy about dreams, but suffice it to say that I believe in listening to my dreams. I’m fortunate to have intense, highly detailed dreams that are often highly prophetic, and this one was no different. Voice readers are aware that I’m expecting my first grandchild in a few weeks. In this dream, the baby was already born, walking and talking to me. I barely recognized the child, and kept asking my daughter how come the baby was already this old? I was very disturbed, realizing that I had missed a large section of the baby’s life. Then the child began to talk to me, calling me “Debbie”. There were many other elements to the dream, and after I woke up I reflected on what it meant. The message seemed very clear – if you are too busy trying to achieve your personal goals, you may miss out on seeing your grandchild grow, and you may remain a stranger to that child.

So I re-thought my future yet again. I looked at the many experiences I had been through in my life, and the choices I did not make. I looked at the choices I did make and what I had learned from them. I looked at my goals for the future and the choices I hope to make. And I realized that things will balance out. I may not get to the end result within the time frame I had hoped for, and the end result may look somewhat different from the way I envision it today. But along the way, there will be more experiences that I will add to my personal timeline, experiences that will be important contributors to my ultimate success.

This past year I’ve allowed far too many negatives to interfere with my life, and this year I plan to focus on the positives instead. A few days before the Christmas holidays began, I made the decision to drop back my Master’s studies to three years instead of two. It will take another bite out of the “years I have left”, but I’m going to look at the positives. The extra year, or two, that it will take me before I have my PhD, will give me time to enjoy my family more. Time, perhaps, to start listening to my physical body when it says, “slow down and rest.” A few other things still require some adjustment in my life, and I will have to make yet more difficult choices in the months to come. Whatever happens, I will try to view each slow down as a positive, rather than a negative step backward.

“Be careful what you wish for” is a thought I will keep at the back of my head. The achievement of my goals and dreams is something worth making sacrifices for. But some sacrifices should never be made, and I hope I can always maintain the right balance.

By the time this article is published, I will already be in the first week of my Masters of Counselling program. I’m excited and more than a little apprehensive. Next week I’ll share with readers my new perspective as a Masters student.

Response to Sandra Moore from The Editor