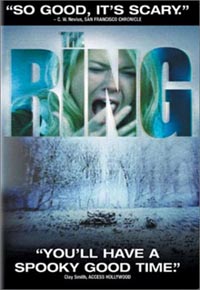 “Oh crap! Why did I start watching this!?” You know when those words come out of your mouth, that a film has got you! In this particular case it is a 2003 release from Dreamworks. The Ring is a reworking of the original Hideo Nakata 1998 hit Japanese film called Ringu, which in turn is based on a book which has been the subject of other films and is an entire cult phenomenon .

The plot goes like this: a videotape is circling the world. It carries a bunch of disjointed images of people, animals, bugs and a ring that fits the description of the tunnel people see as they die. After you watch this short “student filmmaker”-style production you get a phone call. A woman’s voice tells you you’ll die in a week. A week later, to the minute, you die.

I love the character Rachel Keller, played by Naomi Watts. She is a journalist who sees that a number of teens who saw the film all died the same night at exactly 10 p.m. She notes how odd this is since they were not together at their deaths. She puts aside her fears and growing certainty of her own death after she tracks down and watches the production…until her young son, played by David Dorfman, watches it when he can’t sleep! Now she’s really on a hunt to figure this out, and investigates many of the images by digging around in the newspaper “morgue” where all the old publications are kept.

Rachel finds old articles on a woman in the video, which reveal the woman’s love of horses and her strange suicide. Rachel also learns of the woman ‘s daughter and the peculiar child’s psychic talents, and travels to the woman’s island home to track down her husband. He instantly knows Rachel’s a journalist because “every so often someone comes out and wants to know about the horses.”

The husband says he has no answers, which is interesting since he then takes his life in front of Rachel, stating that his wife wasn’t supposed to have a child. Brian Cox, a crusty Scottish actor, shows us a bitterly unhappy man, whose home property includes a chained up barn. Inside is a peculiar attic with a child’s room, dusty with age. Behind the wallpaper on the wall is one image from the film:a tree burned into the wall. It is a major clue. Rachel begins to bump into identical images in her life that were in the video – one by chilling one.

I am not impressed with this film being labeled under mystery and suspense! Suspense my eye! It scared the crapola out of me! I also recommend if you are a horse lover that you either take a long sandwich break when our heroine gets on the ferry or be shaken up by that scene! I was so upset I struggled through the rest of the film and meticulously watched for the last words on the credits stating that the the ASPCA monitored the film and ensured no animals were harmed, etc. Kids must be getting much more able to handle the scary stuff these days since the film was only rated a PG13 or I must be a real old-school fraidycat.

Rounding out the cast, Martin Henderson plays the father of David’s character and the ex boyfriend of Naomi Watts character. A handsome man while alive and a ghoulish ugly guy in death!! This film runs a mere 115 minutes but is a serious production. It is well scripted and well performed throughout.

In Conversation With . . . Stephen Jenkinson: What Suddenly Breaks on Your Shore