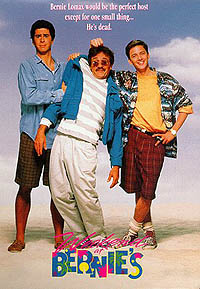 There’s something absolutely uproarious about comic farce done well:and that is the beauty of this 1989 film. As actor Terry Kiser (Bernie) joked in an interview that in his biggest acting success he winds up being a corpse. I’m afraid so. And what a hoot that corpse is.

Start with two dumb guys (Andrew McCarthy as Larry and Jonathon Silverman as Richard). They are working on a hot New York Sunday. They hate their jobs and don’t see any way of getting out of the horrible hours they’re putting in: they just want to be at the beach.

Suddenly Richard discovers someone has been bilking the company — of two million dollars. Enter the living Terry Kiser as Bernie Lomax, the ultimate jerk boss. He’s a cocaine user, a party freak and determined to have a life of fast cars, million-dollar houses and beautiful babes. When Richard and Larry go to Bernie and prove someone is defrauding the company he invites them to his house on Hampton Island for the weekend.

If you don’t know it by now, Bernie is the one getting the extra money. Right away he pops over to his underworld connections and arranges to have them dealt with. Of course he doesn’t know that the bad guys are planning to murder him instead of the kids from the office “because he’s greedy and he’s doing my woman.”

When Bernie winds up dead in his house at the beach Larry and Richard figure he’s super drunk. They try to wake him up and only realize he’s dead after they’ve propped him up on the living room couch. Bernie looks incredibly casual with a half smirk, legs crossed and his arms flung along the couch back. So when the party starts and everyone’s too busy to notice their host is dead, Richard and Larry decide to play along.

Richard is a hard sell but when the pretty little number from the office arrives (Edmonton, Alberta’s Catherine Mary Stewart as Gwen) he agrees to put off calling the police to report the body until he’s had a chance to chat with her. Since his chats are forever incredibly well timed with Bernie getting into trouble (Bernie’s body washing up beside them on the beach is hilarious) it’s getting harder and harder to phone the police”?so Bernie has to stay “alive” a little longer.

Then they try to call the police and the multi-buttoned phone plays back the conversation Bernie mistakenly records of talking to the hit man and planning their deaths. They discover that they are going to be killed as Bernie’s voice says “I just want to be in the city with an alibi.” Now there’s another reason for Bernie to be alive. It’s the way to avoid being killed! Since they’re the only ones that realize he’s dead”?it works so long as they drag Bernie along.

The poor “rusty” hit man winds up going slightly bananas when he keeps trying to leave the job behind him but instead keeps seeing Bernie “walking” around with the guys. The hit man forever has to come back to deal with Bernie but no matter how many times he “kills” him: Bernie is still there!

Drag in the party that never dies on the beach and the wonderful time playing in Bernie’s boat and you get a load of laughs that just don’t seem to quit! One of the funniest moments is Bernie being mistakenly bounced along behind the speedboat and repeatedly banging into the channel markers. SMACK”?DING! SMACK”?DING! SMACK”?DING!

In between all this Richard decides to come clean to Gwen and reveal that Bernie is dead – or at least he tries. The big problem is that he’s choked up every time he sees her and babbles out nonsense like, “uuhhhh : my aunt is very sick.” He even spins a tale about his parents being dead – but his parents are in the next room. So what do you think Gwen thinks when he finally announces that Bernie is dead?

Eventually the bad guys are stopped and Bernie is taken safely away to the morgue: ehhh: but the guy driving the morgue truck starts to blab to a cute gal and Bernie rolls down the beach to fall off the stretcher and land behind Larry, Richard and Gwen.

This film has so many fast-paced sight gags I’m almost choking on popcorn when I see them.

We’ll just ignore the ease with which the corpse stays fresh in a boiling hot sun and how the guys get him to “walk” with just a tie of their shoelaces : well, at least Larry swats flies off of the corpse for a touch of reality!

Eventually we’ll just have to realize that before Titanic came on the scene, the sequel to this film was the biggest grossing film of all time. This original film is far and away better than its sequel. Be prepared to be silly and think silly”?logic is the way to kill having a good time. 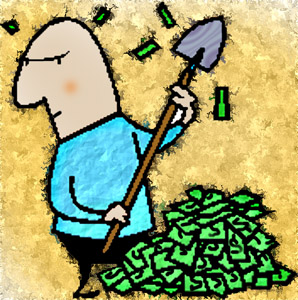 What to Do with A Big Lottery Win