Articles
The Voice
The Gleason Brothers

My youth was filled with the stories of larger-than-life trappers, prospectors and homesteaders that lived and worked in British Columbia’s interior during the early twentieth century. My mother’s family lived in a small sawmill town called Penny which seems to have been the cross-roads for many an intrepid soul. Their stories of harrowing wilderness adventures were circulated amongst the residents and transient workers that passed through town. No doubt many of those stories became distorted and exaggerated almost beyond belief as they passed from mouth to mouth. Even so, they were incredible fodder for the imaginations of children and adults alike.

At an early age, my father began taking me into the wilderness. My first trip to the top of Penny Mountain was at the age of eight and I can still recall laying in my sleeping-bag within the rustic mountain-top cabin. I listened to my father and my uncle, wilderness author Jack Boudreau, discussing stories from “the old days”. The flickering orange fire-light that escaped through cracks in the old pot-belly woodstove chased shadows about my bed as their voices painted pictures of grizzly encounters and other harrowing tales within my mind’s eye. The knowledge that grizzlies lurked on the other side of the 14-inch logs which comprised the cabin’s walls lent urgency to the stories. I’d not known it then, but a few years later I’d have my own tales to tell.

I liked to hear any and all stories that my seniors were willing to tell, and re-tell. Many of the most interesting were of two brothers named Chris and Frank Gleason. The Gleason brothers immigrated to Canada from the United States during World War One. They settled near Dome Creek BC and built eighteen cabins around the headwaters of the McGregor River. They hunted and trapped and survived off the land; and in the years they spent in the wilderness, they accumulated a vast number of adventure-filled stories. My father met the two brothers while working in Dome Creek in the early 1960s. Many years later Chris Gleason had retired to Vancouver BC, and my father and Jack went to see him. Inevitably the old stories were exchanged until Chris told a tale that my father had a difficult time swallowing. 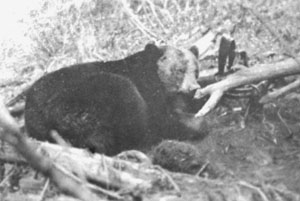 Chris told of a day on one of his trap-lines. He had been collecting furs all day and his pack was fully loaded. He was on his way to one of the line-cabins to settle in for the night. Suddenly he heard loud thrashing and the gnashing of teeth further up the trail. Then he remembered that he’d set a bear-trap in that spot and he knew that a grizzly was caught in it from the distinctive sounds. Back then leg-hold bear traps were still legal, but they’ve since been outlawed as inhumane and far too dangerous (many trappers who forgot where they’d placed them, stepped into their own bear traps”?an instant broken leg and likely death to a lone trapper). Chris knew that he couldn’t carry any more fur and he didn’t want to kill the grizzly for naught. He slowly approached the bear, which was obviously worn out from its struggles against the trap, until he could see that it had nearly chewed its paw off to escape. According to Chris, he dismounted his pack and took out his hunting knife. He cut a long, straight pole and tied the knife onto the end of it. Talking gently to the grizzly, he tentatively reached out with the pole and cut the remaining flesh that held the beast fast. Once freed, it stood, stared at Chris for a moment, then slowly turned and retreated into the forest. In concluding his tale, Chris mentioned that he’d had the forethought to snap a picture of the beast just before he’d cut it free.

I can picture my father rolling his eyes in disbelief at the conclusion of that story. Anyone who has exchanged hunting or fishing tales can tell an “embellished” story from an accurate recounting almost every time. At the end of their visit, my father asked Chris if he had any pictures from the old days; the answer was no. But his wife remembered a shoe-box full of old negatives. My father borrowed them and had prints made up for Chris, Jack and himself. The pictures that accompany this article are two of them. The first is of Frank (on the left) and Chris Gleason, their packs loaded with fur; and the second is the picture that Chris took of that grizzly just before he cut it free of the trap. If you look closely you can see the bear trap at its head; the pole that Chris cut is barely visible in the upper right corner of the photograph. My father was surprised that Chris’s story turned out to be true. There is no doubt that Frank and Chris Gleason were two outdoorsmen that were bigger than life—truly.